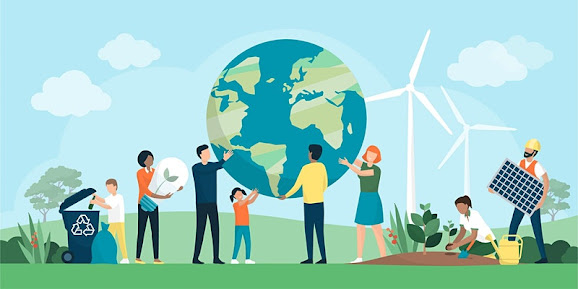 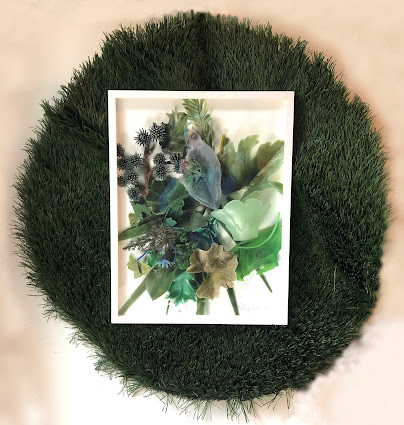 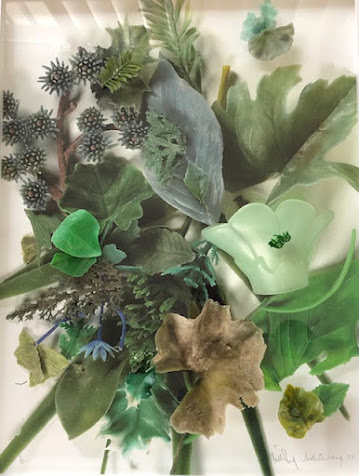 This year our Making It Green, a photograph of plastic plants that we've collected from Kehoe Beach will be on display at the Mill Valley Community Center, Sunday, April 24, from 1-5 PM as part of a family friendly festival with amazing art, fun games, inspiring talks, good food and music. Learn more at www.greenchange.net

Simulacraceae is the satirical taxon given to faux plants by botanists from Cornell and Yale. Plastic plants are new since the 1950’s but even ancient Egyptians manufactured plants of metal and stone and papyrus. Plastic fruit and flowers endure, never drawing fruit flies or bees. It’s plastic, it lasts forever, no watering, no refrigeration required.

From the Journal of Ethnobotany Research and Applications a scholarly article that describes the taxonomy, ecology, and ethnobotany of Artificae Palantae Simulacraceae. HERE. 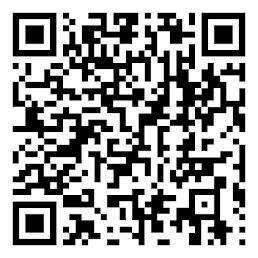 Posted by Beach Plastic at 6:57 PM No comments: 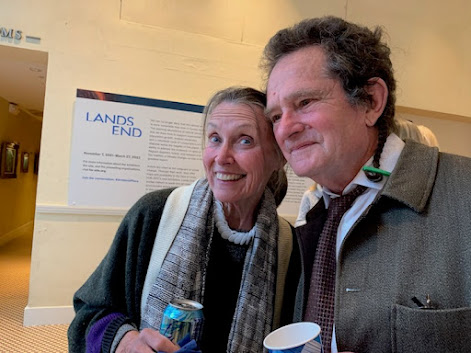 On March 28, we arrived at the Cliff House for the closing party for Lands End feeling a bit sad, being at the end, the final moments, of such a grand enterprise. The conclusion of a show is always bittersweet, but after all it gave us a real uplift.

We were so happy to be in the warm embrace of the for-site staff and docents who gave so much of their precious time to Lands End. They graced us with their stories about the people, the kids of all ages, who were amazed at the beauty of the luminous presentation and horrified at the reality of all that plastic. We heard about the kids who were full of good questions, "how did this ever end up on the beach?" Most of the stuff was familiar (straws, cutlery) but they were really curious about the plastic noodle extrusions and the shot-gun wads.

It was such a pleasure to be amongst such a fine group of kindred spirits who expressed their personal gratitude and on behalf of the thousands of attendees who were were deeply moved and changed by our kitchen and the entire Lands End experience. As artists one of the great rewards is to have a vision then be able to realize it and in this case, to have an entire kitchen to serve up our plastic.

In turn we want to express our gratitude to all who made for here or to go? possible.

It has never been more important for artists and activists to join together in combating the existential threat of climate change. Lands End did what you/we had envisioned - using art to activate the conversation. 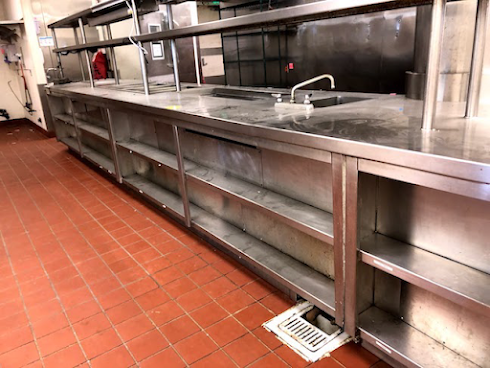 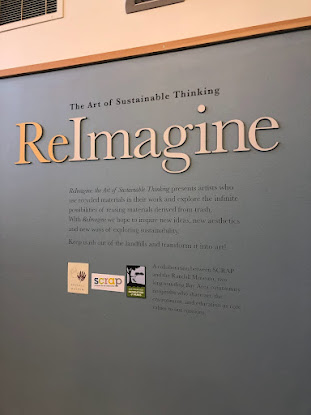 What fun to be out and about for the ReImagine Gala at the Randall Musuem. After the long days of Covid sheltering and restrictions we were renewed and reenergized. We are at the ready for more. With old friends and new — such a grand opening. 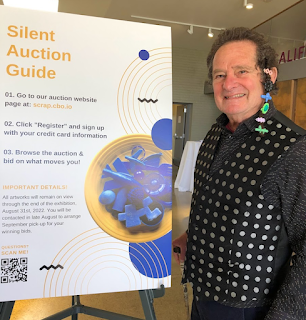 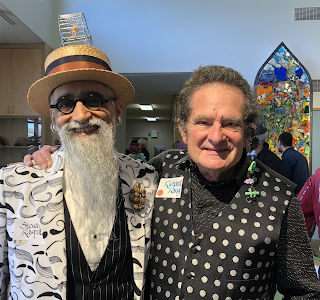 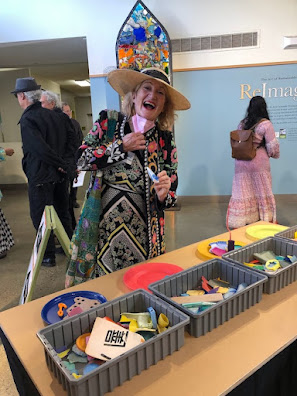 We agree with curator Lady Bee when she said, it’s time to revamp our ideas of the commercial art world and repurpose the use of resources — making reuse the new norm…Plus, the artworks in ReImagine give us so many other re’s to add to the familiar Reduce. Reuse. Recycle. They are a testimony to the power of the imagination to envision and revision creative responses to the complex environmental challenges we face. 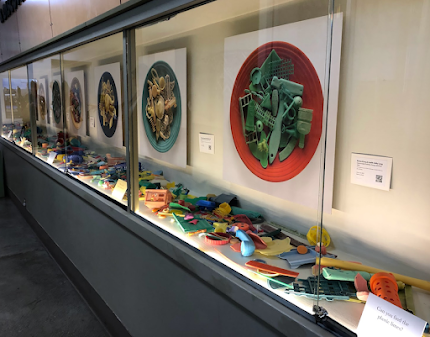 We were delighted to find the restore, reset, reclaim hats in our swag bags giving us yet another reason to put on our sustainable thinking caps and keep the sounds of recreation reverberating. 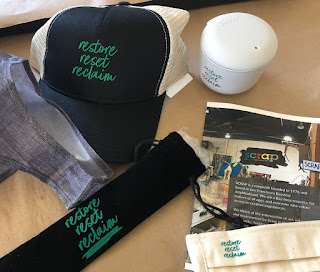 We tip our hats in thanks, to recognize everyone who worked so very hard to make the afternoon a resounding success.

We are revved with love and gratitude.

Posted by Beach Plastic at 7:49 AM No comments: 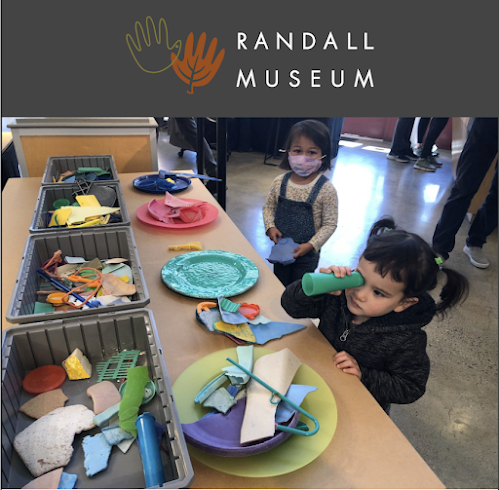 LOOK is right!!!
LOOK at the boundless imagination — creativity at work.
LOOK just give the kids some plastic and they will know what to do.
LOOK no instruction needed.
LOOK the little girl is taking Einstein's advice to heart.
With her plastic periscope in place, she is a visionary.
quote from the Randall Museum exhibition page
https://randallmuseum.org/exhibits#rotating-exhibit
LOOK we are sooo happy to see the hands-on art in action.

Help us celebrate SCRAP's spring exhibition and fundraiser: ReImagine: The Art of Transformation (Creative Reuse, etc) in partnership with the Randall Museum. This exhibition is a celebration of SCRAP's arts community highlighting repurposed art forms that bring disparate items together to create a new whole with a new purpose.

Thanks to exhibition curator Lady Bee AKA Christine Kristen we are joining forces with an illustrious group of artists from Burning Man and the Bay Area. We're serving up our colorful Kehoe Beach plastic on colorful plates from our Unaccountable Proclivities series with eight prints 30" x 30"with different color combinations. For the auction preview, view the artistic offerings, then bid early and bid often.

The exhibition is open now until August 31 so you can stop by to see the work in person. From its hillside perch, The Randall has a spectacular view of San Francisco and while you are there Cafe Joesphine offers a delicious lunch menu with sandwiches and salads for takeout on the patio.

Join us Sunday afternoon, April 3 for a special in-person garden party. View the art on display, meet the participating artists and enjoy the spectaular view of San Francisco.

Posted by Beach Plastic at 8:13 PM No comments:

FRIEZE- what to see during San Francisco Art Week 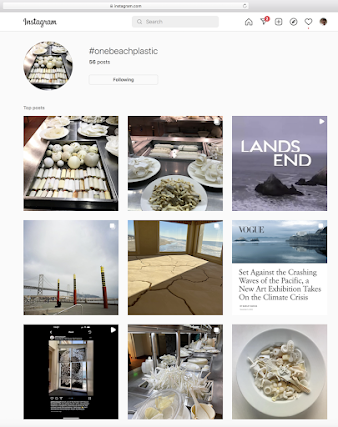 Jan Stürmann's video One Beach Plastic For here or to go?

Posted by Beach Plastic at 6:18 AM No comments: 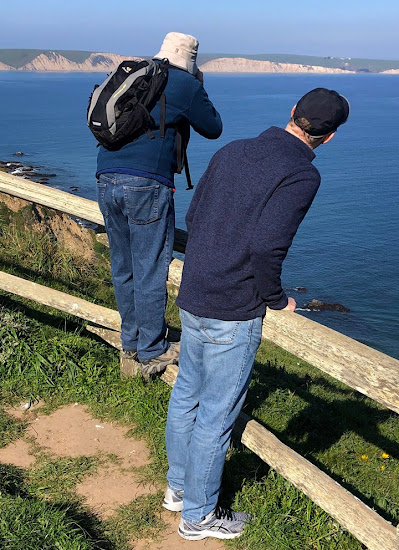 Plastic may be a prime reason to go to the coast but yesterday with blue skies, a glass-smooth blue bay and two intrepid hikers (Doug and Doug Woodbring) in blue there were other reasons. From the ridge crest tip of Chimney Rock, we could view across the way to the white cliffs of Drakes Bay and muse about fossilized layer of geological history and the whale vertebrae they found back in 2015.

Enjoying the sun and surf, the massive elephant seals have hauled out to mate and pup in the protected coves. We lean in to listen to the clicking, belching and bellowing from below. Hey, what’s that commotion? 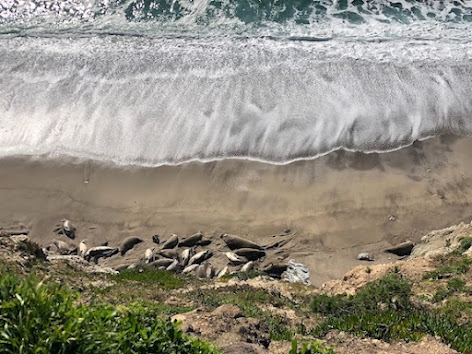 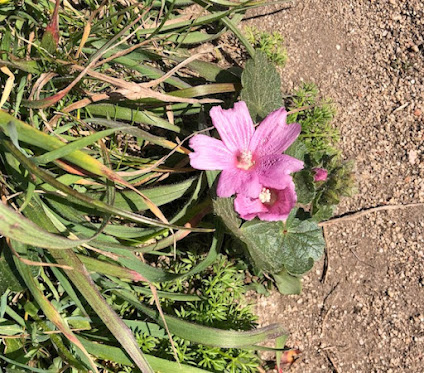 Yes, there is the thrill of that first peek in pink at the Checkerbloom (Mallow) but, the real pleasure was experiencing the sights and sounds with others who are avid appreciators of the natural world and especially, curious people wondering...hey, what’s that commotion?

To arrive at our destination, we drove the 20-mile length of Lagunitas Creek to where it reaches Tomales Bay, continuing on to the Chimney Rock turn off. How the heck do those salmon ever even remember their home stream and navigate the 20 miles from the open ocean to the perfect spot up stream to spawn? 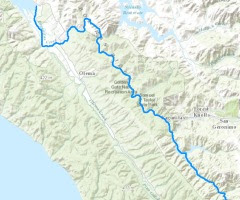 Posted by Beach Plastic at 8:52 AM No comments: 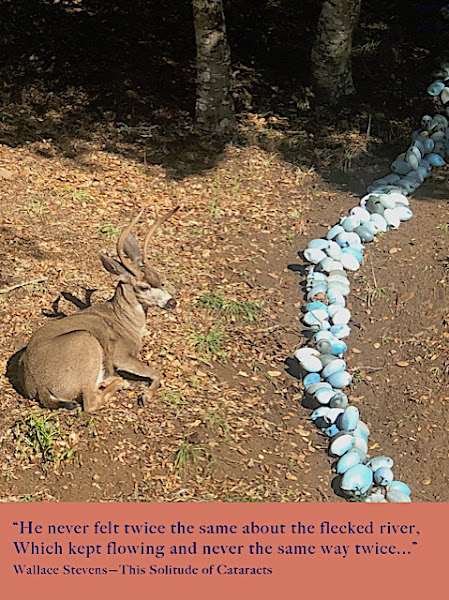 So, today, at the close of the year, Winter Solstice, we mark the moment with this poignant photo of a buck next to one of the exhibits in our burgeoning Art Mind Park project where we have continued to be productive on our “Covid Vacation.” The Park where we can and do, continue to do, what artists do, finding a way to express the ineffable quality of a pair of minds long dedicated to saying, “This is what it was like while we were here.

The buck is settled in, enjoying Río Azul, made from fish-net-floats all collected from Kehoe Beach—many by the two of us and many donated by friends who appreciate our avidity for collecting the same thing in a category. It’s called Río Azul after the river in Guatemala that flows into a park, a bio-reserve nearby the ancient Mayan citadel of Tikal.

This Solitude of Cataracts by Wallace Stevens

He never felt twice the same about the flecked river,

Which kept flowing and never the same way twice, flowing

Through many places, as if it stood still in one,

Fixed like a lake on which the wild ducks fluttered,

There seemed to be an apostrophe that was not spoken.

There was so much that was real that was not real at all.

He wanted to feel the same way over and over.

He wanted the river to go on flowing the same way,

To keep on flowing. He wanted to walk beside it,

Under the buttonwoods, beneath a moon nailed fast.

In a permanent realization, without any wild ducks

Or mountains that were not mountains, just to know how it would be,

Just to know how it would feel, released from destruction,

To be a bronze man breathing under archaic lapis,

Without the oscillations of planetary pass-pass,

Breathing his bronzen breath at the azury center of time.

...the oscillations of planetary pass-pass...

What great words to evoke a forever feeling.

Steven's poem brings to mind this painting called The Thatched Hut of Dreaming of an Immortal by Tang Yin (1470-1524) and the seriousness of art and the seriousness of the creatures that inhabit our environs like this buck, long ago having given up the juking and pronging of his fawn self. We've had the satisfaction of watching him, knowing him before his voice changed and he grew antlers.

Mortality/Immortality — we think about it now more than ever before, with both of us having graduated into the seventh decade, our Biblically allotted three score and ten. This past year we’ve grieved the loss of personal friends in the arts: Jackie Kirk, Hung Liu, and William T. Wiley, inspired and inspiring artists who we’ve had the great pleasure of working with.

Plus, we mark this moment post Richard’s brain surgery where four years of increasing disability were palliated by a shunt to drain away the clouding and crippling effects of excess fluid. Like the guy with crutches in the movie Greaser’s Palace who was healed by a skydiving Jesus, Richard shouts, “I can crawl! I can crawl again!”Yes, Judith and Richard both receiving the blessing of a complaint-free moment.

We are grateful for you, our friends and family, and for the rain that has set into motion the tumult of blue buoys in our once dry creek bed. We offer an invocation, a prayer for more rain, for more water.

On this Winter Solstice, we are thinking about the continuum of change, the returning of the light and yep, we've got 'em, the “oscillations of planetary pass-pass.”

With love and good wishes,

For an unforgettable art outing at the iconic Cliff House:

Posted by Beach Plastic at 6:49 AM No comments: