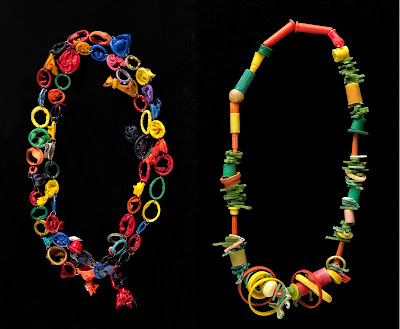 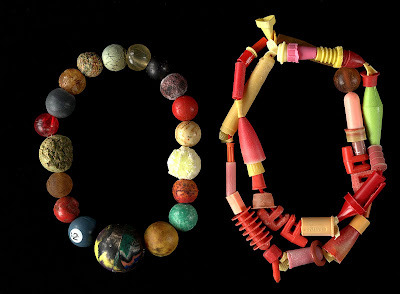 Posted by Beach Plastic at 8:57 PM No comments:

By giving aesthetic form to what is considered to be garbage, I serve as both cleaner and curator. While the content of my work has a message about the spoiling of the natural world by the human/industrial world, my intent is to transform the perils of pollution into something beautiful and celebratory.

These necklaces were made from plastic collected from Kehoe Beach in the Point Reyes National Seashore. Irresponsible visitors did not leave this plastic on the beach; rather it washed up from the ocean. Some pieces show evidence of being at sea a long time, roughed and tumbled by the salt and the waves. Some have identifying markers indicating that it traveled far, from Korea or Japan.


I hope by putting a little fun and fashion into the conservation conversation, that the value of detritus will increase. Soon everyone will be out at the beach “shopping” for a special piece of plastic trash or will be eager to “mine” the North Pacific Gyre for plastic treasures. Then, we get some great things to wear and to look at, plus we get a clean and healthy sea.
Posted by Beach Plastic at 8:55 PM No comments: 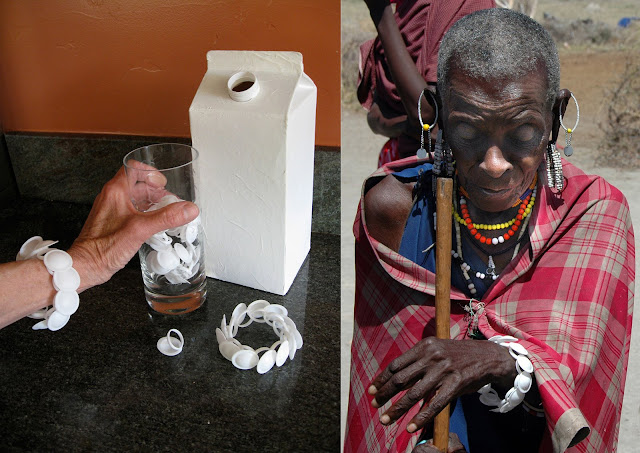 Milk used to come in clear glass bottles delivered early morning on our doorstep. Years later, at the store we bought milk in a boxy wax carton with a fold open spout. Now, in the name of sanitation and convenience, milk cartons have been “improved” with plastic safety milk pull-tabs. Now, thousands of these ubiquitous tabs are making their way to the landfill. It will take thousand of years for them to go away.

To draw attention to this blight, I created a bracelet by looping one loop inside the other and on around until the final one loops into the first one. People always take note of my unique jewelry, which gives me the opportunity to talk about plastic and to encourage action about everything, even about milk cartons.

During a recent trip to Tanzania, I visited a Masai village where the inquisitive fingers of an elder Masai woman touched my bright white bracelet trying to figure out what could be the source and the material of my unusual adornment. I asked our guide to explain that I had made the bracelet out of milk pull-tabs; that they were something that would otherwise be thrown away; that I am an artist who uses recycled plastic in my creations. I was babbling so fast that probably neither she nor my translator understood a word of what I was saying.

When she expressed interested in my bracelet I was thrilled. She is also an expert crafts person who makes elaborate bracelets and neck collars. With mutual respect as artisans, we made an exchange. I now wear one of her fine beaded bracelets and she now wears my milk-tab bracelet.

I imagine that when I am telling this story about my amazing experience with the elder Masai woman — she is telling someone about the crazy white woman who came into the village telling stories about recycling plastic? and milk cartons? I have to laugh, they subsist milk and blood from cows, probably have never ever seen a milk carton — so I was indeed crazy-talkin’.

In a gesture of appreciation of art and adornment, the Masai woman and I connected. ART held the moment — through beauty we were able to speak when language just wouldn’t do.