Imagine a cadre of gray-haired women carrying this sign… 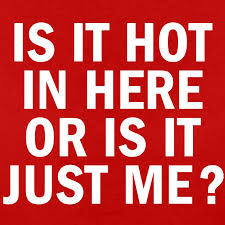 First, it was the Women's March and then, the March for Science and now, the People's Climate March. Thousands of people gathered on Saturday for, yet again!!!, another rallying cry for action.

Via live-broadcast from Washington, DC we were able to watch the crowds, in the sweltering heat, drumming and shouting as they circled the White House.

A somewhat quieter but just as environmentally committed group of folks gathered at Falkirk Cultural Center for the closing party for the Living Oceans exhibition that included a 77th birthday party for celebrated marine artist George Sumner.

On this day, when people are thinking about how petrochemicals impact the planet, people were captivated as they watched the onslaught of plastic in the ocean via our SeaSpan TV. 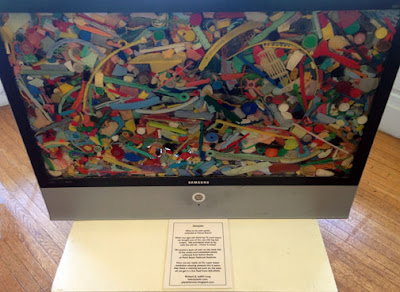 And our Bottle Cascade is notably relevant — as an example of how the ocean currents serve as great conveyors cycling debris from all around the world. Single-use bottles and bottle caps are among the most common items found in the ocean waste stream. They come to our beaches, from our neighborhoods and from thousands of miles across the sea, connecting the world in swirls of single-use plastic.

On Kehoe Beach in the Point Reyes National Seashore we find telltale product labels from Malaysia, Hong Kong, Singapore in Chinese, Japanese, Korean, even Russian and Hindi. And our bottles from the San Francisco Bay end up on distant shores. 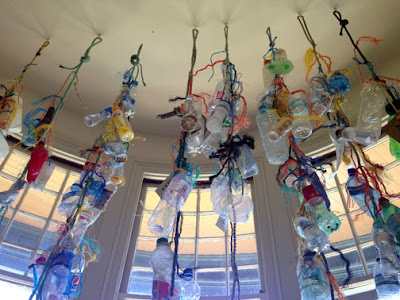 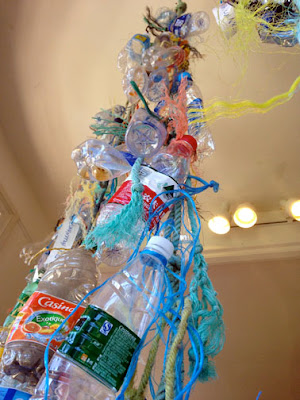 Special thanks to Margret Farley and the Cultural Affairs Service League for mounting Living Oceans, a timely exhibit that addressed the profound influence the ocean has on our lives; on climate change. Just remember, our planet is 30% earth, 70% water.
Posted by Beach Plastic at 8:23 AM No comments: 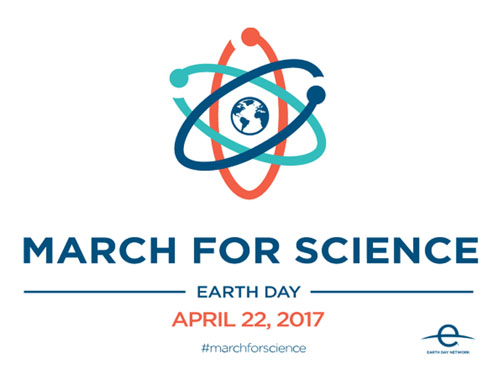 Today, to celebrate Earth Day, we will be digging the dirt. While getting the corn and cassoulet beans in the ground, we will be thinking about the scientific discoveries that have enlarged our understanding of the world and will be wondering how the idea of science ever became so maligned. We are frightened about the current political climate and we believe that corporate profits are fueling the unwillingness to accept the facts about climate change.

We are heartened by the photos of smart signs coming in on the news wire. This pic from
the March for Science in DC.

We are reminded of a different time politically when in 1962, the President of the United States, John F. Kennedy, spoke about the ocean and the deep connection we have to the sea.

We have salt in our blood, in our sweat, in our tears. We are tied to the ocean. And when we go back to the sea, whether it is to sail or to watch it, we are going back from whence we came. – John F. Kennedy

And in 1969, these words from President Ronald Reagan: Can you believe... Mr. "You've seen one redwood you've seen 'em all" said this?

To contribute to the Earth Day conversation we were honored to be invited to participate in the 5th Annual Earth Stewardship Symposium at West Valley College a vibrant educational institution at the center of the diverse and rich learning laboratory known as Silicon Valley.
Co-presenters included:
James Nestor, author/ adventurer
Halley Froelich aquaculture and sustainable fisheries
Stiv Wilson The Story of Stuff 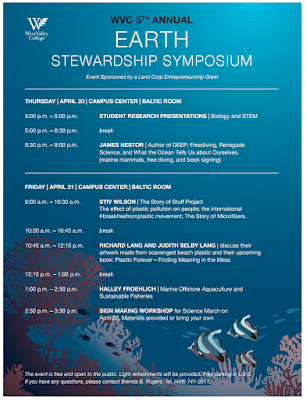 This spring we have been on quite a journey. We had a blast in Baltimore  at the American Visionary Art Museum, came home for a quick turn-around week. then went back again to the East Coast to Woods Hole, MA to celebrate the 70th birthday of Ron Zweig, Richard's venerable amigo from high school, circa 1962.

Along with spending hours in relaxed conversation with Ron and his wife Christina, we meandered the beach picking up plastic—how great to have these kindred spirits who are amassing their own collection of treasures. The Naiads gifted Ron with two mylar helium birthday balloons washing up to wish him a "Happy Birthday, Happy Birthday". 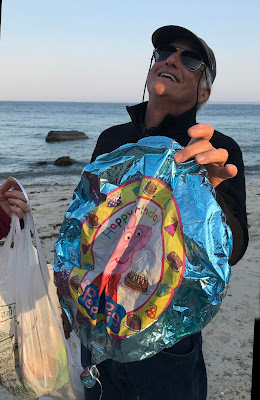 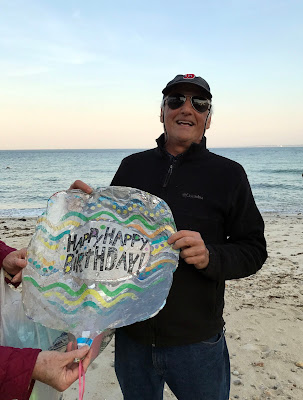 On Easter we enjoyed the annual eggroll and potluck brunch at the New Alchemy Institute. There were kids galore and now grown ups who were there in 1972 for the first roll. 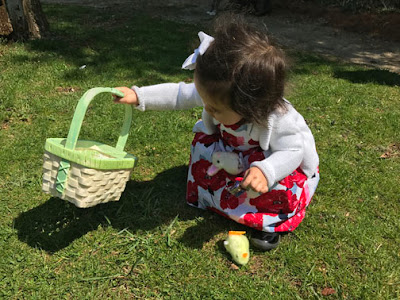 Back in the day (1971) the New Alchemy Institute was the epicenter for the developments of aquaculture, composting, and sustainable sanitation technologies. From the West Coast Judith, as an aspiring back-to-the-lander, longed to visit and Richard actually did in 1976 when friends Ron and Christina worked and taught there. The centerpiece of New Alchemy was a structure of passive and active solar energy, aquaculture all integrated into a home. The home provided waste systems as well as food production. These structures were called Arks. http://www.thegreencenter.net/ To be inside a home like this is to enter an eternal golden spring, where entropy itself, is put on hold. The grief Robert Frost expresses in Nothing Gold Can Stay, is held at bay by the likes of the wizards of New Alchemy:

Nature’s first green is gold,
Her hardest hue to hold.
Her early leaf’s a flower;
But only so an hour.
Then leaf subsides to leaf.
So Eden sank to grief,
So dawn goes down to day.
Nothing gold can stay. 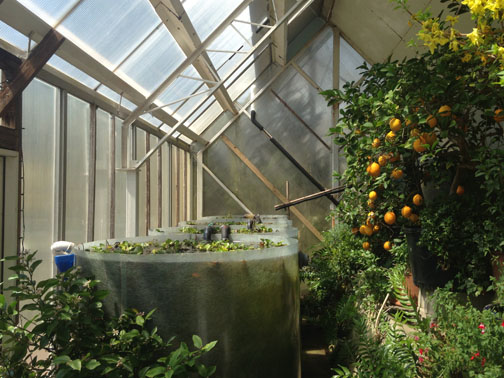 Although we could fall into a pit of despair about the bad news about the planet instead, we offer some links to bring heart back into a fraught period:

The Rocky Mountain Arsenal, notorious for making chemical weapons, is now a wildlife refuge. Although visitors are allowed, the area is still too toxic for human habitation.

The infamous Korean DMZ is home to three species of endangered cranes as well as the endangered goat, the Amur Goral.

Chernobyl, 30 years after the nuclear disaster, is quite alive with moose, wolves and beavers who are busy re-creating the Pribyat River.

In New York City there is the spectacular High Line Park. Inspired by the Coulée Verte in Paris. There are now such parks sprouting up in Chicago, Japan, New Jersey, Philly, London, Atlanta.

Close to home in Lagunitas there is the one-man operation, The Last Resort.
In need of your support: Sign the petition on the website. 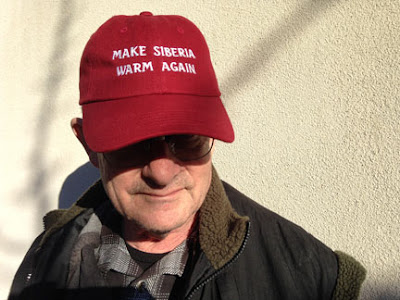 We believe that good humor is the best way to get a point across, so Richard is happy to be tipping his hat to Secretary of State, Rex Tillerson with a message affirming his intention. Exxon has invested big time in Arctic exploration. They are licking their chops about the melting permafrost that will make it easier to extract the oil. Rex? Is this what our Secretary of State is tasked to do?

A Blast in Baltimore 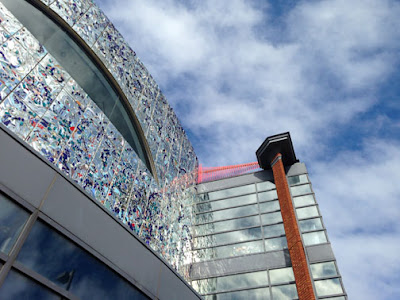 Although it was a whirlwind trip to Baltimore and the American Visionary Art Museum we are grateful for every moment. From Vollis Simpson's whimsical Whirligig to the ascending/descending turn of the mirrored wings of Andrew Logan's  Black Icarus to the spiraling energy of the dedicated staff at the AVAM we were caught in a vortex of inspiration.

As we have written in earlier blog reports of our farm and garden—Rule #4 from Rancho Deluxe (formerly Uncle Dick's Fun Camp) states:

4. Listen to the small voices. Trust the whispers. Pay attention to what you glimpse out of the corner of your eye. It’s how you know what to do. Your furtive mind will offer many ideas that may become discounted because they are not practical, or remunerative, or, foolish in the eyes of others. Try some ideas out, they may become a signpost or a dead end but you won’t know until you act.

The old saw—the proof of the pudding is in the eating— finds the concept vitally alive at AVAM. This place is a delicious feast for the eye, heart and that most precious attribute: human imagination.

We are in awe of founder/director Rebecca Hoffberger who is visionary-in-chief of our all-time favorite museum. She does not shy away from using the museum as a place for bold statements and as a forum for inciting discussion about provocative issues. She is committed to opening the heart and embracing the creative spirit. 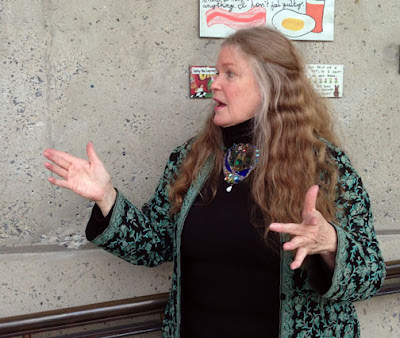 Along with an extraordinary permanent collection of artworks by "outsider " artists every year the museum mounts a large thematic exhibition. This year its YUMMM! the History, Fantasy and Future of Food. To increase awareness about the problem of plastic in food our film, One Plastic Beach is included in a loop on the big screen. 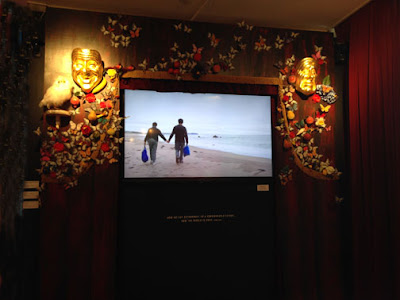 The table was set with a rainbow pile of plastic. Participants were given a plate and encouraged to make an arrangement. This was not a take-away project but Beka Plum, K-12 education coordinator, was standing by to snap a Polaroid pic. The plastic then went back into the pile for use by the next person. We knew our project was going to be a hit with the kids, but we did not expect this kind of hit. Our activity table attracted kids-of-all-ages. And talk about gourmet plating. Culinary artistry. The arrangements were fun and fanciful —how about a ham on rye with a pickle?  YUMMM! 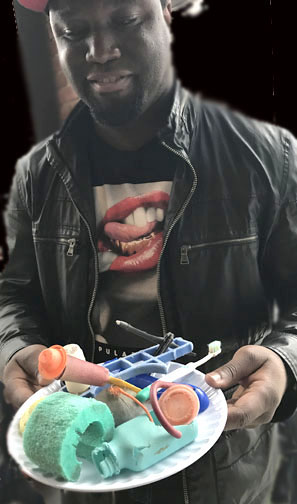 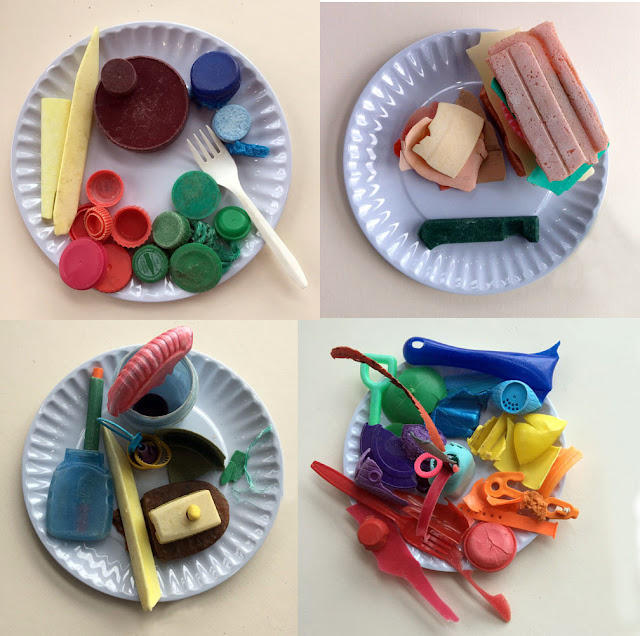 Many of the kids had never seen a Polaroid so there were great squeals of delight as the image magically appeared. 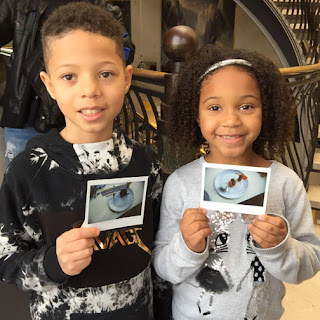 We were honored to be invited to present our powerpoint at the Logan Visionary Conference: Food, From Crisis and Innovative Delight and to share the stage with such a remarkable group of experts:


Big thanks to Abby Baer, conference coordinator, who kept us on time, on target, making sure everything went without a hitch.

We stretched out our art experience by making a quick stop at the National Gallery of Art in D.C. to check in on Thomas Cole's four-part allegorical series, The Voyage of Life. Over the years we have visited this painting several times to gauge where we are on the river of life. After the turbulence of 2016 with our move from the daily grind of commuting to Electric Works in San Francisco to the successful transition of the business to Richard's son and daughter-in-law to our days of retirement we find ourselves nearing the edge of smooth sailing. 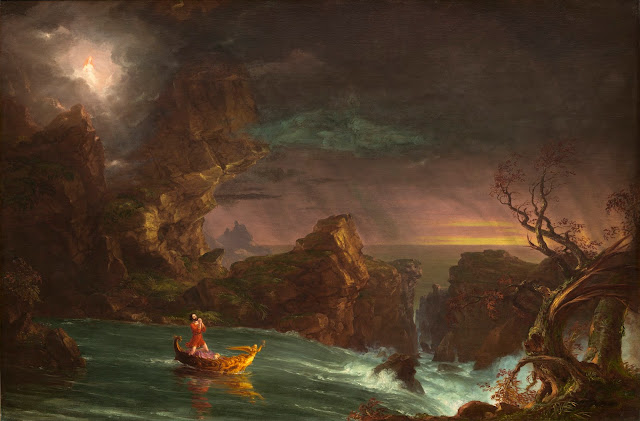 Posted by Beach Plastic at 8:30 AM