We had no idea that Taylor, our next neighbor, otherwise a very sane person, is jigsaw puzzle addict. Took her no time at all to complete the 500 pieces from our "Buffet" series co-produced with Ocean Recovery Alliance.

As an aficionado, she explained that the variety of colors and objects in the image made it fun and a bit easier to do. When we showed her the design with the expanse of sand, she exclaimed — ohhhh too hard. A point well taken as we continue our test-marketing.

She was thrilled with the completed puzzle. We all agreed, it does look good and has a beautiful shimmer, as does Taylor. 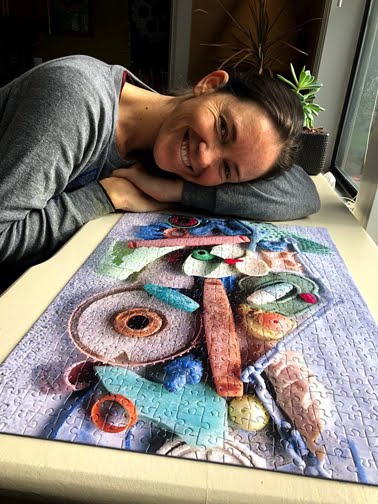 Truth to Power and the Blue Wave were the themes for this years Women's March. Judith took both to heart and created two blue waves. One, a waving hand, and the other inspired by Hokusai's wood-block print The Great Wave off Kanagawa, both embellished with beach plastic. Because when ever, where ever, plastic and pollution should be in the conversation. 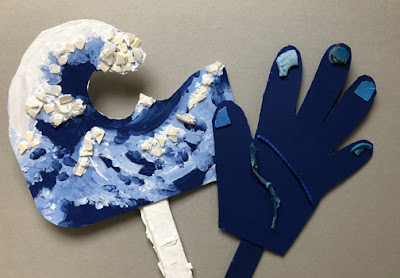 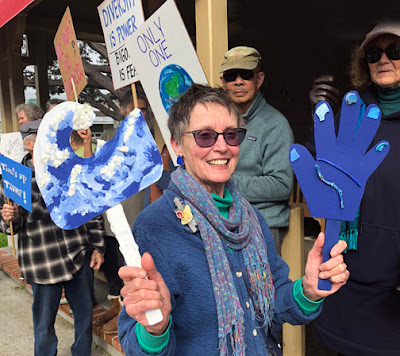 In the run up to the March, there was much divisiveness — some think seeded by the Russian operatives sowing political discord. But in Point Reyes people showed up. People stood up. People were united by Richard leading the group in a chant: 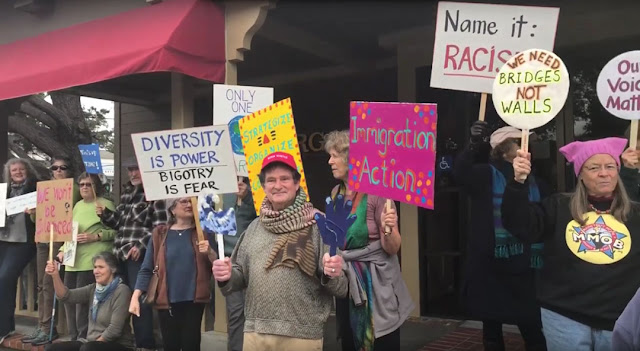 The people united will never be defeated.

With the clear and oh-so-cold mountain air we welcomed in the New Year at Lake Tahoe. 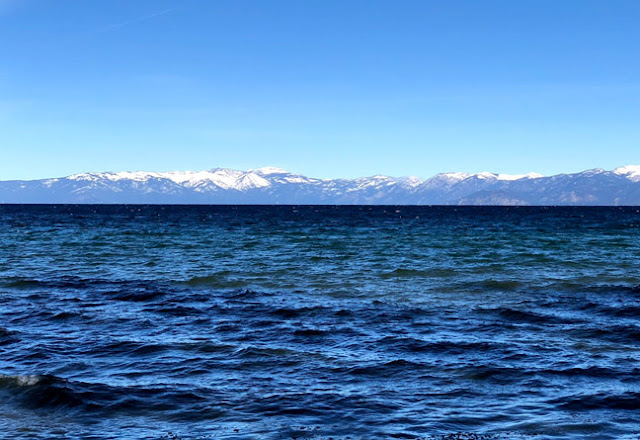 “It is a vast oval, and one would have to use up eighty or a hundred good miles in traveling around it. As it lay there with the shadows of the mountains brilliantly photographed upon its still surface, I thought it must surely be the fairest picture the whole world affords.”
Mark Twain, describing Lake Tahoe

On road trips Judith is our book-on-tape — on this drive to South Lake Tahoe she was reading aloud The Adventures of Huckleberry Finn. New Years Eve while out on a tear we happened upon our new-old-friend Mark Twain commemorating his many adventures in these here parts. Richard sat down with Twain to talk things over. 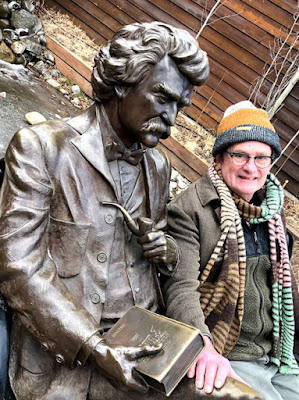 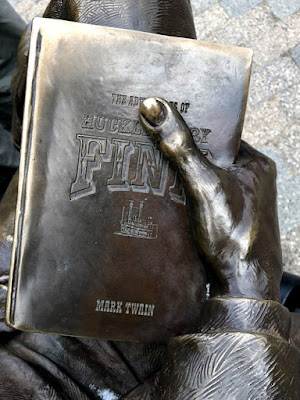 With Judith's sister Janis and brother-in-law Paul we wiled away some relaxing and cozy hours by the fire. Richard enjoying Consilience by E.O. Wilson and Judith working the first of our puzzles that are hot off the press. Partnering with Ocean Recovery Alliance in Hong Kong we will be offering in 2019 jigsaw puzzles in two styles that we intend to sell in museums and gift stores.
“Littoral” — in situ images of plastic pollution in the environment
“Buffet” — colorful, eye-dazzling artistic arrangements of plastic
Promoted as a stimulating opportunity for education, awareness building, and fun, each puzzle set is either 99 pieces for youth (5 and older) or 500 pieces for those who would like to be challenged with the plastic puzzle that literally and littorally impacts our global community. Challenge indeed — 99 pieces was fairly easy to complete, giving that weird sense of accomplishment when a piece fits into place. 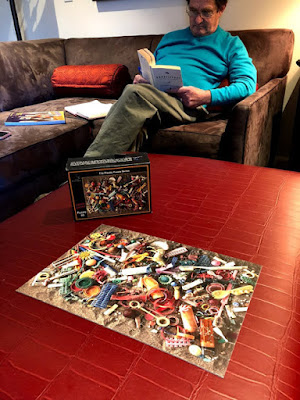 A brisk walk to the Tallac Historic Site had us all shivering from the cold and blistering wind coming off the lake, but not too cold for Janis who, always on the case, has a keen eye for trash. 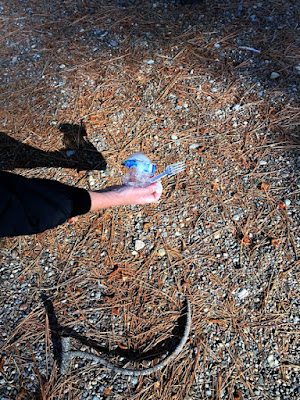 and Judith who found one of those pesky fruit labels 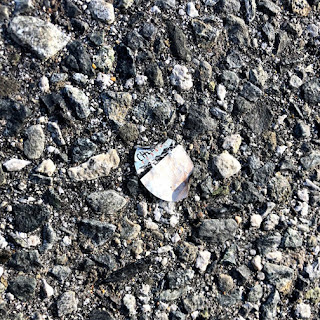 As we headed for Fallen Leaf Lake we spied a huge pile of colorful pieces of plastic at the bottom of a sledding hill — a mound of broken saucer sleds and plastic toboggans  — remnants of fun and crashes. 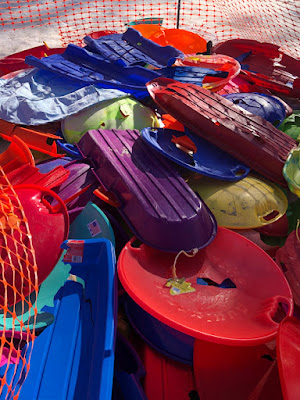 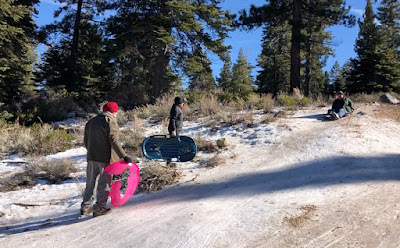 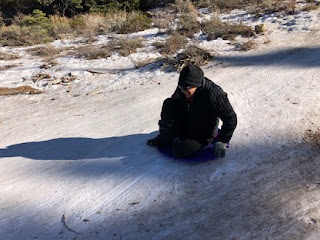 The pile of broken fragments should have been warning enough but Janis stood stalwart as "Safety Dog" warning us to be careful on the slick ice until she took a tumble that landed her in the emergency room with a broken humerus — that was not funny.

So as to not end with such a catastrophe we turn to the way Janis has transformed the catastrophe of the tinniest pieces of plastic into a beautiful revery on snow flakes. An avid Instagrammer, along with her great pics, she writes long informative posts. 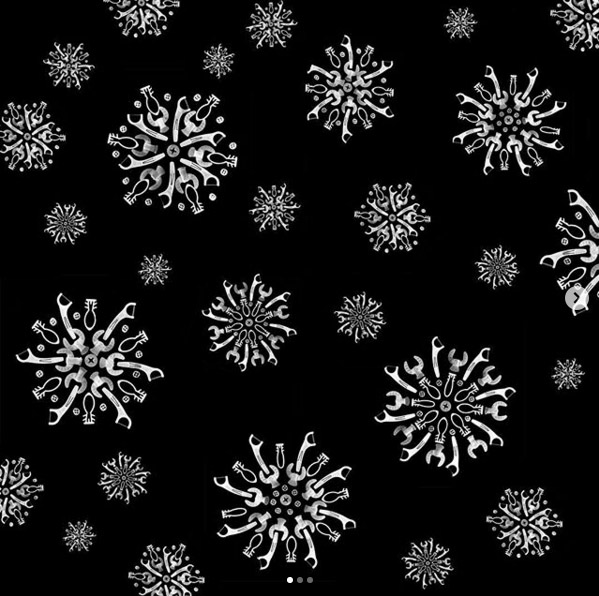 Here in the Bay Area, we know little about cold (excepting in the summery fog), but as Poet Antonio Machado says, "The cold is a good advisor, but it is cold." And...quoting something attributed to Twain but uncorroborated is the coolest thing he never said, "The coldest winter I ever saw ..."
Posted by Beach Plastic at 8:14 AM No comments: