His vision, from the constantly passing bars,
has grown so weary that it cannot hold
anything else. It seems to him there are
a thousand bars; and behind the bars, no world.

As he paces in cramped circles, over and over,
the movement of his powerful soft strides
is like a ritual dance around a center
in which a mighty will stands paralyzed.

Only at times, the curtain of the pupils
lifts, quietly--. An image enters in,
rushes down through the tensed, arrested muscles,
plunges into the heart and is gone.

It may seem strange to begin a Plastic Forever blog post with a poem about a panther but it offers perfect insight into this day and this walk to Kehoe Beach.

In 1905 Rilke moved to Meudon, France to take a job as sculptor Auguste Rodin's secretary. When Rilke told Rodin that he was suffering writer's block, that he had not been writing lately, Rodin's advice was to go to the zoo (the Jardin des Plantes in Paris) and look at an animal until he truly saw it. Rilke began to study the caged animals displayed behind bars, observing the endless pacing and the confines of their captivity. He was not just looking he was seeing deeply into… 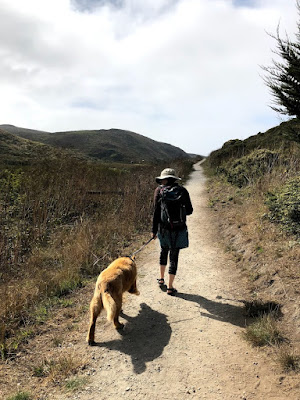 Heading on a road trip to the mid-West, Victoria Sloan Jordan, poet and film producer, wanted one last longing look at the Pacific before driving inland all the way to Kansas. Richard recovering from MOH'S surgery was unable to join us, but Victoria's old wonder-dog Rilke, blind and deaf, was ready for the terrain of new and exciting smells.

These days we spend so much time focused on our screens that the expanse of the ocean horizon is a welcome respite from the close-in view in our computers. Plus there is the great pleasure of using our eyes scanning, looking for the tiniest slips of plastic poking out from the sand. 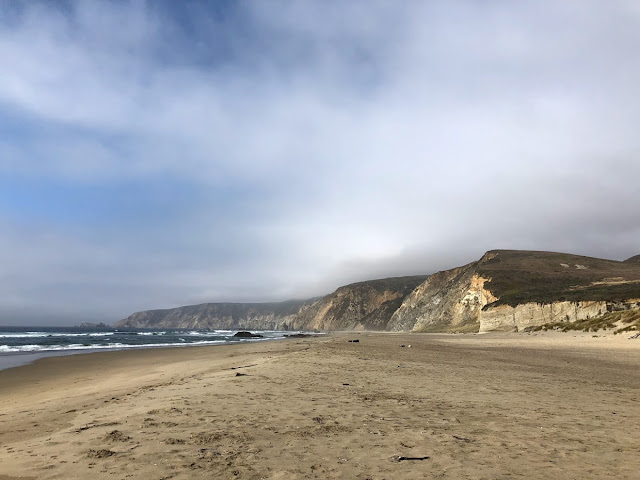 How great to spend the afternoon in the companionship of Victoria who has devoted years of her life observing the albatross on Midway Island and being on the team that brought the story of those magnificent birds to the big screen.

Our conversation was as wide as the horizon as we enjoyed the beach and beyond. We talked of poetry and plastic, watching for whales and the waves. 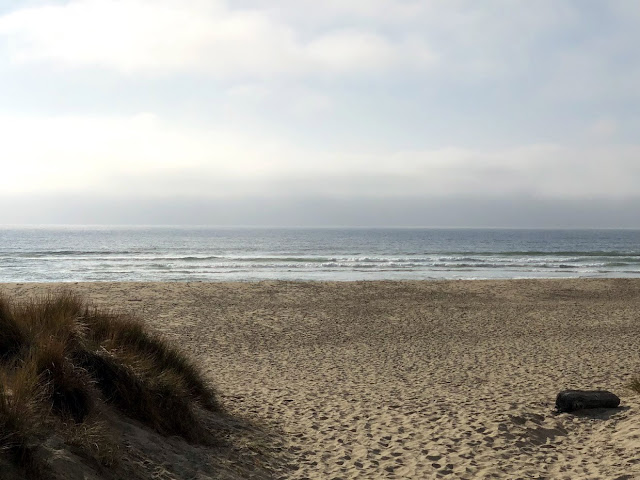 Imagine Tokitae (Lolita) an orca whale who has spent 47 years swimming round and round in a concrete pool in captivity at Seaquarium in Florida. Imagine her possible retirement being returned back to her pod in Puget Sound. We recently learned about the amazing work of the Whale Sanctuary Project and their efforts to establish a seaside sanctuary where whales can be safely relocated to an ocean environment as close as possible to their natural habitat.

At dinner with Richard we read The Panther aloud and marveled at Rilke's observational skills. Thanks to Rodin's sage advice, he overcame his writers block and became, as he described, “to be a real person among real things” and thus cure himself of what he wonderfully called his “breathing difficulties of the soul.” 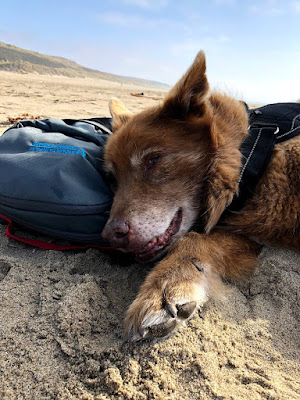 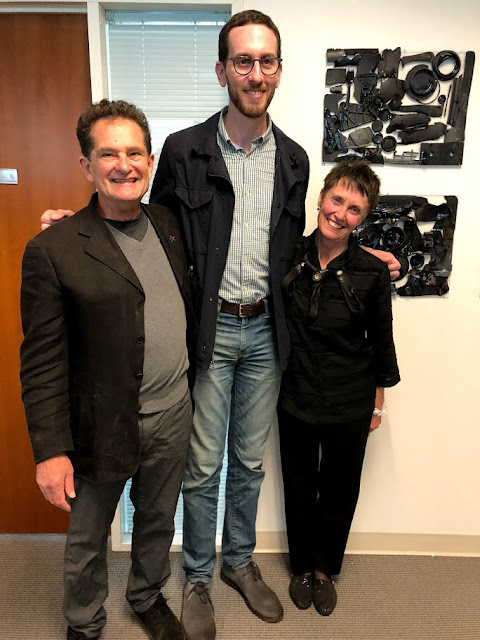 On Friday we met State Senator Scott Weiner who is hosting eARTh an exhibit held in conjunction with the Governor's Global Climate Action Summit. Big thanks to curator Joesph Abbati for including four panels from our Black Gold, Texas Tea series. Along with 20 Bay Area artists whose work is inspired by nature, earth, the environment, climate, and activism, we were glad to be in the fine company of the Hughen/Starkweather team— who, we learned, have also taken on the theme of Black Gold for their up and coming show at Recology.

There was a huge crowd — with friends, near and far, who braved the traffic to arrive at the California State Office Building (we love going places but what about what about all black gold to fuel us there?) The celebration seemed especially big to us. Since our retirement and recluse-ment, we have been staying close to home, not venturing much in to SF— and to think we used to commute 5 days a week! Richard has been calling our new found sequester— the monastery, naming Judith as the Abbess herself who is keeping us on a rigorous creative schedule with most of the day in the studio, garden work in the late afternoon and strict as she is, allows a martini at sundowners.

We were sorry to have missed the reception and artlab for Eco Echo: Art and Environment Lab in Palo Alto this weekend. Thanks to Barbara Boissevain and our eco colleagues for keeping the echo going.

We were up and out early on Saturday. As official beach captains, stationed at Kehoe Beach, Point Reyes National Seashore we were there from 9-12 to welcome participants in Coastal Clean Up Day. A beautiful morning to walk the talk with others, commune with nature and pick up some trash — our three most favorite things.

Since we had to stay by the trailhead for the checking in and weighing out, Judith meandered along the roadside - had no trouble finding plenty to pick up including 20 cigarette butts and 27 candy and food wrappers. 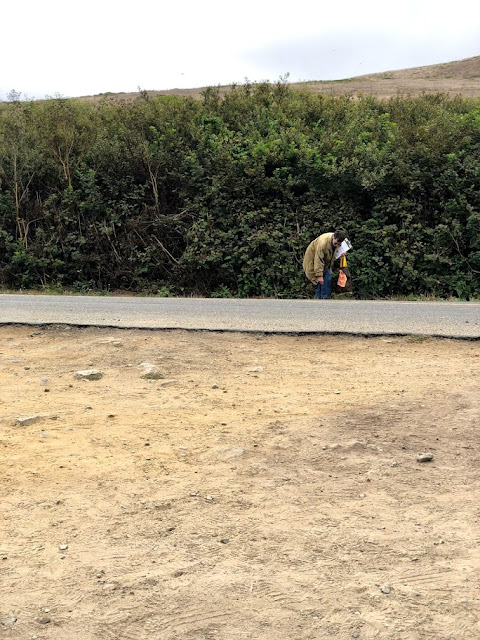 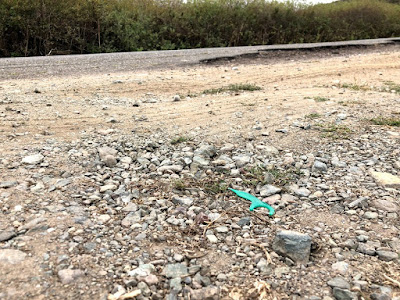 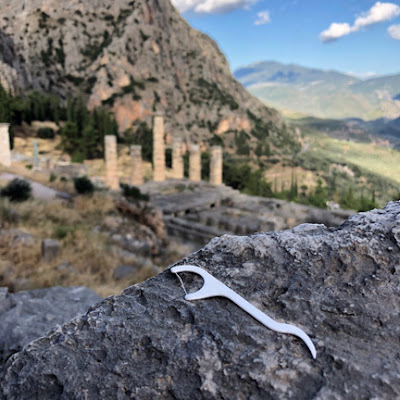 And this!!!! a dental flosser akin to the one Judith's sister, Janis Selby Jones found this summer in Delphi. Is there a message here from the Oracle about dental hygiene and planetary hygiene?!?

Although Kehoe Beach, as the crow flies, is only about 39 miles from SF, the twists and turns of the road make it feel remote distance. Nevertheless, we had an enthusiastic bunch: 23 participants who brought in 109 pounds of trash and recyclables including a few mysteries and treasures. 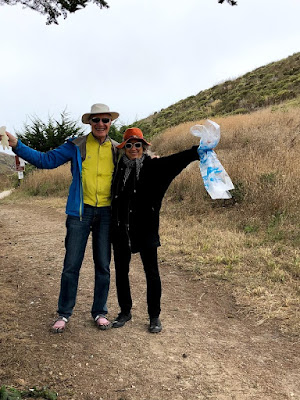 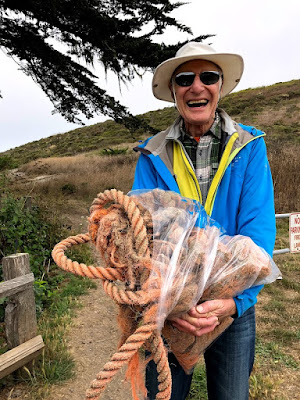 Although the final tally has not yet been confirmed, according to preliminary data from the California Coastal Commission, statewide more than 53,073 volunteers collected upwards of 734,606 pounds of debris, including more than 35,674 pounds of recyclable materials. By Saturday afternoon, the Marin IJ reported that the Marin County haul was more than 8,100 pounds of trash.

Janis went inland from Oceanside with a stalwart crew who wanted to catch it before it made it to the coast as part of the I love a Clean San Diego cleanup. 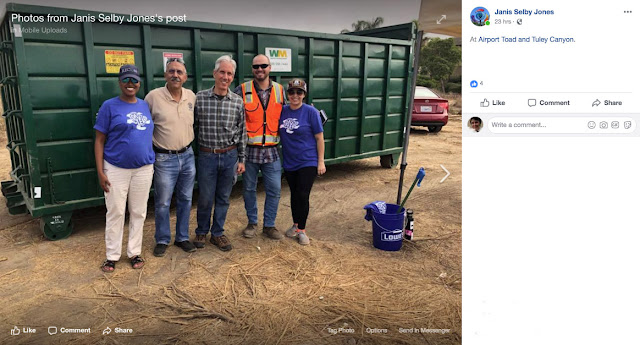 Grandson's Jude and Gray helped with the count at Loch Lomond Marina in San Rafael. 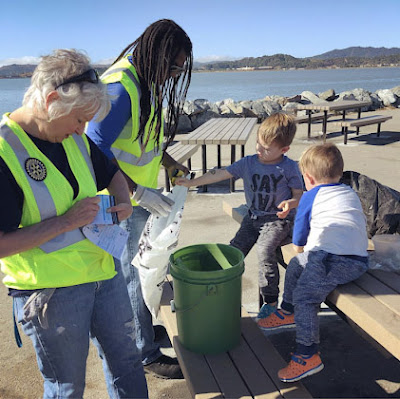 Coastal Clean Up Day, now in its 34 year, is the largest volunteer effort on the planet. Their citizen science documentation has found that, since the plastic bag ban, plastic bags no longer appear in the top ten list of items found. Yay! Taking a count makes a difference.

Thinking BIG this year we went international by connecting with Let's Do It from Estonia and World Clean Up Day.  Since could not stream live from Kehoe we pre-recorded a segment to air on their 24-hour programming that, as the world turned, followed the "clean wave" of clean-up efforts around the globe with live reports from Bulgaria, Iran, Dominican Republic and more. When the day was done, 144 countries with almost over 13 million volunteers participated.

Thanks to Kristi Sobak, broadcast producer for World Clean Up Day, for putting together this interview. With the time difference (10 hours) between California and Estonia, we were not exactly awake for our wake-up call, but here we are, a bit bleary-eyed, thrilled to be able to speak to the world audience. 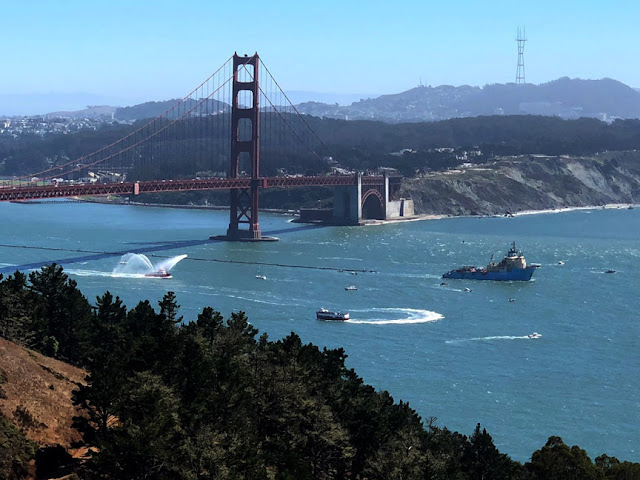 There are plenty of ideas about what to do about the onslaught of plastic flowing into the oceans — including Boyan Slat who gained notoriety two years ago with a cockamamy idea, a brainstorm about a big boom scooping up the plastic in the North Pacific Gyre.

Or maybe not so cockamamy… enough people believed in him, to the tune of 31.5 million USD yep $$$$$ 31.5. There have been plenty of nay-sayers and doubters galore but today under glorious fog-free San Francisco skies the Ocean Cleanup System 001 launched.
And we were there to witness this momentous occasion.

From high above the Golden Gate Bridge, we found a perfect vantage point, a breathtaking view with Doug Woodring, our globe-trotting friend, who just touched down in SF after a long flight from his home base in Hong Kong. This week world leaders are gathering for the Global Climate Action Summit and Doug will present his ideas to a group of government leaders.

In 2009 Doug was with Project Kaisei the first research expedition to the Gyre with the goal of sampling what was actually in the gyre. He co-founded the Ocean Recovery Alliance. This year his tireless efforts for the ocean were recognized by Prince Albert of Monaco winning the Award for Innovative Philanthropy An avid waterman (long distance swimming, paddle sports), he is on is way to Hawaii to compete with his 6-man team, doing a big 45km canoe race from Maui to Molokai.

Doug whipped out his cell phone and like a pro-commentator made a movie that within moments he had posted on Facebook. He really knows how to work social media.

As the ship pulling the 2,000 meter-long tube passed under the bridge, the Coast Guard gave a dramatic water salute. And we saluted too. We wish Slat and his venture adventure well. But until the report comes back, we will be at Kehoe Beach picking up plastic. As for stats: for Coastal Clean Up Day 2017 in California 54,101 volunteers collected 533,671 pounds of trash. That's 266.83 tons.

International Coastal Clean Up Day, California Coastal Cleanup Day, World Clean Up Day and Let's Do It are joining forces on Saturday, September 15. On that day several thousand volunteers will pick up a guesstimated shitload of plastic.

Slat estimates when fully deployed his rig will pick up
3 tons per week.

We are sending this greeting to our Let's Do It friends in Estonia who are coordinating 24 hours of TV programming for International Coastal Clean Up Day: Click here. 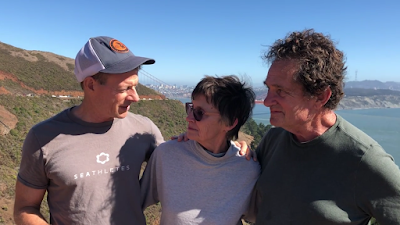