Art show, science fair, film festival and reunion.
However you want to describe it, Message in a Bottle 2018 at the Palace of Fine Arts
was all of that and so much more—
a great confab of ocean-lovers and plastic pollution activists
and students with their families who were eager to show off their work on display. 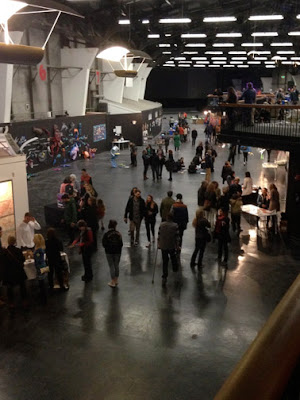 The scale and scope — a tidal wave of hope for the oceans — a buoy of up-lift.

Although we keep up with the plastic people via social media, we love being in the real (not virtual) presence of friends and colleagues Science Programs Director from 5 Gyres Carolynn Box, artist Alicia Escott, and The Story of Stuff Stiv Wilson.
After years of knowing about Aaron Hazelwood, the plumber and beachcomber extraordinaire, we had never met. He has amassed quite a collection from Ocean Beach: 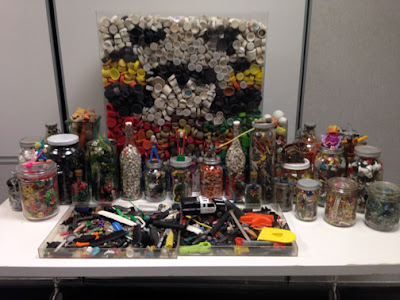 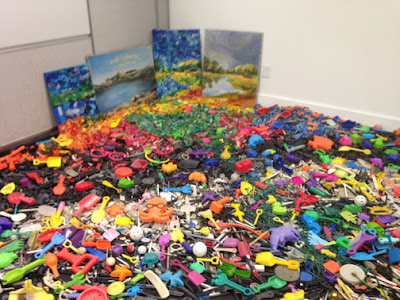 We were happy to compare notes and to see among the hundreds and hundreds of the red Kraft Handi-snack cheese spreaders he has collected that he too had one green one. Back in 2010, we had corresponded with Kraft about their efforts to go "green." His find validated our thesis.

Internationally renown photographer Mandy Barker, all the way from Great Britain, was in San Francisco at Fort Mason for the Photofairs/San Francisco and at the Palace for Surfrider's Message in the Bottle. 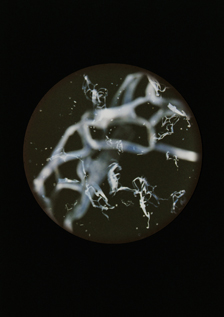 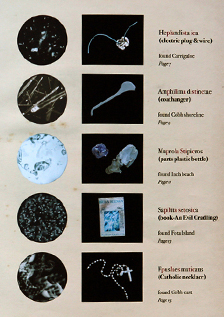 Her latest project Beyond Drifting is a remarkable re-creation of microscopic views of plastic and plankton that are presented in large scale prints and as an old science book circa 1830.


Thanks to the Internet and email we have had a long collegial long-distance correspondence. In 2015 we contributed footballs to her World Cup series. This year when she called for Coke bottle caps we shipped her a box full. 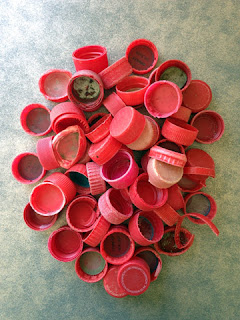 We were thrilled to add the monumental Palace of Fine Arts to our growing list that we are calling, tongue in cheek, "Scenes of Triumph." When we began our project it was something of a hobby—even artists need a hobby, right? But in the 20+ years of our project, our notoriety has been on an ever-expanding trajectory. Are we glad about this? More than for some notion of fame and "fortune" we believe we've brought awareness of plastic pollution to venues all over the planet, from Cairo to Lincoln Center, from Alaska to Brazil and on this evening in the grand exhibit hall of The Palace of Fine Arts.

Originally built for the 1915 Panama Pacific Exposition as a venue to showcase some 11,000 works of art — through the years The Palace went through a bad time of ruin then was restored in the 60's. The enormous space now hosts, corporate events, trade shows and even Message in a Bottle 2018. The scenic grounds are a popular tourist destination with the rotunda, colonnades and lagoon serving as popular sites for wedding photography.

Richard's story abou the Red SUV unwinds a story about The Palace and his commute to San Francisco.

Our "Spiff "and "Bottles" hung in a prominent position just inside the front door of the exhibition hall. Such fun to watch visitors taking a long good look up close at our "Barrette Wreathe." 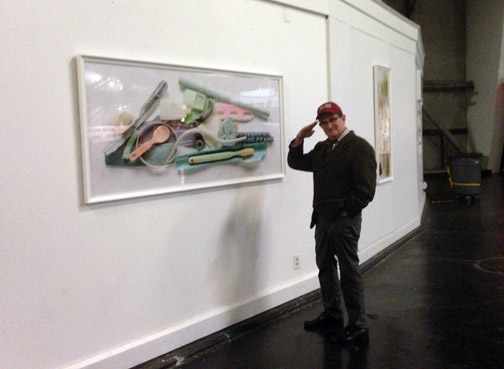 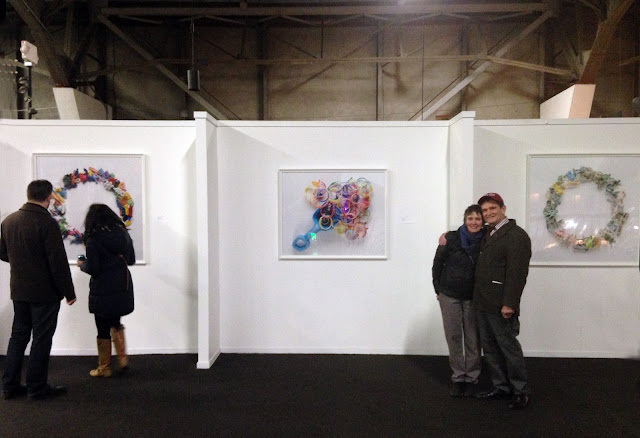 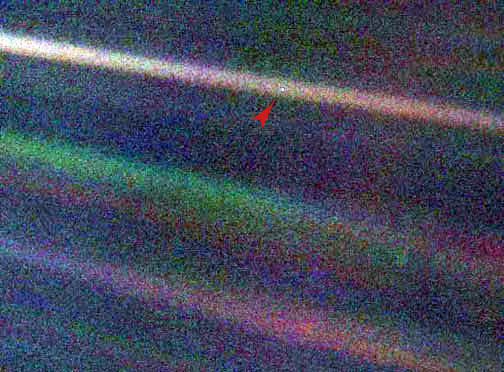 NASA's Voyager spacecraft launched in 1977. In 1990 when it reached the farthest edge of our solar system, its camera looked back and snapped the first-ever picture of the Earth, the pale blue dot, and the planets from its vantage point beyond Neptune.

To be in the orbit of Frank Locatell and John Casini, pioneers who championed the project at Jet Propulsion Lab, and to see them in the film "The Farthest" was one of the highlights of the Inspire Film Festival. Voyager carries the notorious "Golden Record" of the sounds and pictures of our planet—it's still traveling at 38,000 miles an hour. Houston, can you hear me? JPL is still in contact with Voyager at this writing. Here is Canadian astronaut Chris Hadfield covering David Bowie's Space Oddity.  Too bad we can't send Voyager this song but remarkably Dr. Casini said the computer on board has only the power of the computer we carry around in our pockets—not your smart phone, but your key fob.

Film festival founder and director Jane Minarovic with programming assistance from David Holbrooke brought together a stellar lineup of film makers and subjects who are inspiring exemplars of the human spirit. From ping pong whiz Wally Green in "The Tables" to Kevin Pearce in "The Crash Reel" it was a star-studded weekend. And our One Plastic Beach during the opening night festivities sparkled on the big screen to the accompaniment of cello player Ben Sollee "Ditch the Van" with film-inspired fashions by Mindy Fisher. 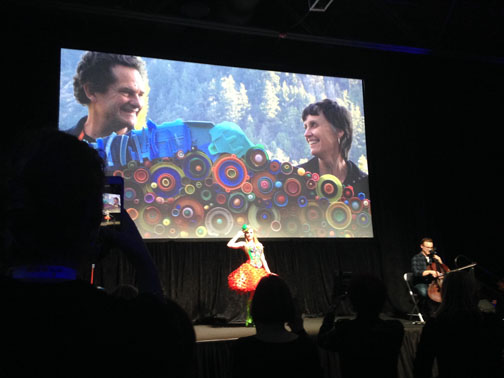 There is much to be said about the size of Texas and Southern hospitality. All weekend we were in the warm embrace of the festival team with old friend David and his able assistant Hayley Nenadal. Our "minder" Betty gave us a big howdy welcome with drawl so thick some of our cohort were asking for simultaneous translation. And everywhere we went there were people and paparazzi wanting to snap a pic. We could get used to this. 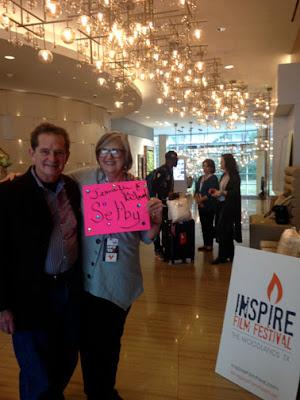 Wally and Kevin became our true inspirational heros. Wally as he said of growing up in Harlem "I should be either dead or in jail" but Ping Pong saved his life. Tables were set up at The Woodland's Market Street Central Park and he took on all comers spotting 15 points and using his cell phone as a paddle. The most fun was to hear his trash talking hip hop banter—infectious and joyous. Kevin's story goes from the highest peaks to death's doorstep. He was regularly beating current snowboard gold medalist Shawn White when a near fatal head injury brought him into a new life of generosity and wide arms of truly loving life. Do we want to be more open hearted? more embracing? Greater appreciators of every second? Yes, Please. Gimme some'o that.

We rolled into the The Woodlands Arts Council with a suitcase full of Kehoe Beach plastic for our hands-on workshop. Patricia Dillon from the Houston Chron filed this report. 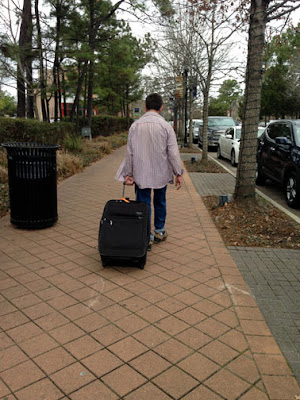 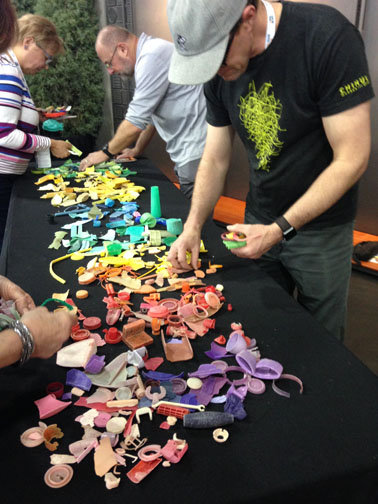 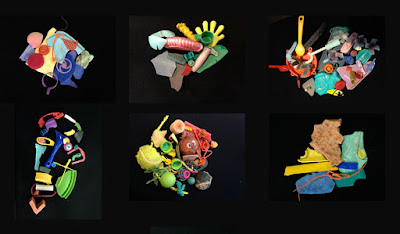 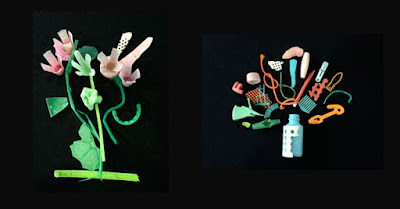 We had folks making their own arrangements and photographing the results. Once again, the remarkable truth of every individual's "signature" came shining through. What is that signature? From the most humble materials, that lesson shines through. 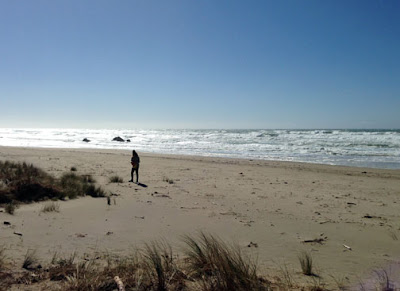 Carl Sagan proclaimed, "There are more stars in the universe than there are grains of sand on Earth."

On Monday at Kehoe Beach we were sure the sand was winning the count when the northerly wind had blown away the fog and was whipping up a pelting sandstorm. Although the sand stung their faces, Judith with visionary artist Rebecca DiDomenico, remained undaunted. When the dust settled, they could see nurdles among the tiniest flecks of plastic and sand. 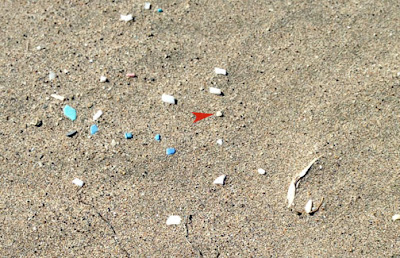 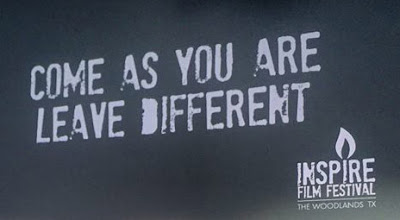 Posted by Beach Plastic at 2:52 PM No comments: