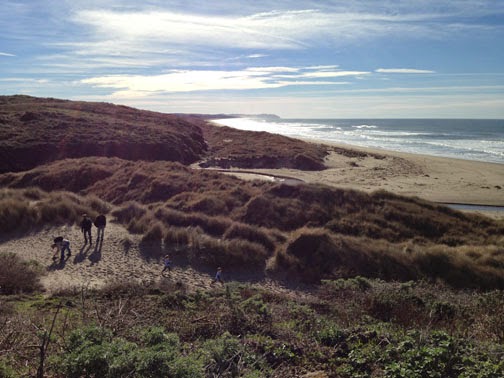 It's rare day when it is clear enough to see, in sharp relief, the distance all the way from Kehoe Beach to the Point Reyes lighthouse. This scoop of strand called The Great Beach or 10 Mile Beach is usually drenched in fog, rain or surf mist. But on this day, it was sunny and warm—the horizon razor sharp. From the top of the hill where we snap a pic on every visit, Judith caught this image of our troop headed down to the tide line: Doug, Doug's brother Pete with his two boys Harry and Walker plus just in from Hong Kong our new friend Kwokzu.

Our old friend Doug Woodring has a keen eye for plastic. He is the co-founder of the Ocean Recovery Alliance, founder of the Plasticity Forum and coordinator for the Hong Kong International Ocean Film Festival. And, besides being a plastic activist par excellence, he has time to be a competitive open water swimmer.

So our favorite place to take him when he visits from Hong Kong is Kehoe Beach. Although we all found bagfuls of plastic there was only one agricultural tie, found by Doug. 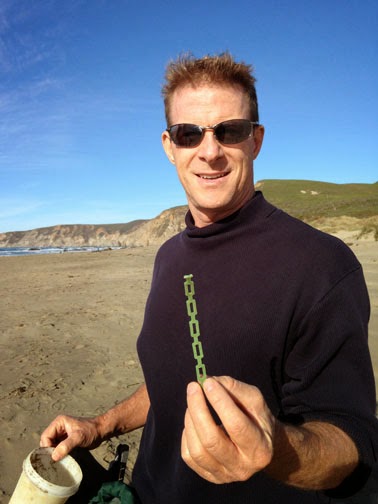 Check out those green sacks. The Gardener's Hollow Leg, donated to us by Bob Bloomberg, are an indispensable part of our beach attire. Yes, count 'em— four bags full. 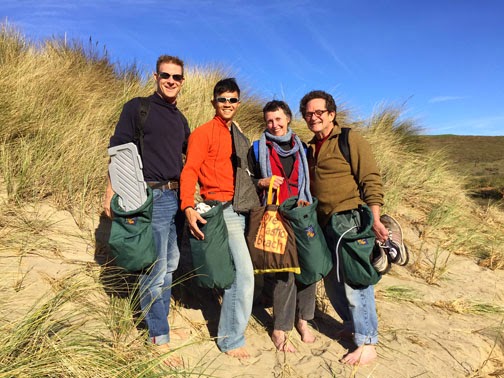 As 2014 draws to a close we are grateful for friends from both near and from far across the sea who are as avid as we are about doing something about the plastic pollution problem.

We can't thank you all enough…yes we can!!! and the planet thanks you too. THANKS! and Happy New Year!

Posted by Beach Plastic at 8:29 AM No comments: 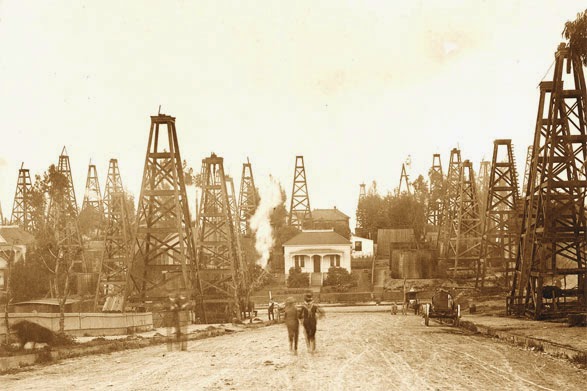 Although there has been significant reduction in the amount of smog in the LA basin, there is still the smell of petroleum in the air. Oil rigs and refineries and the sweep of freeway overpasses remind us that who we are and what we do is fueled by the embedded remains of prehistoric creatures. The string of diamond headlights winding up out of the valley as we drove in on Friday evening tell us that we are indeed in the heart of car culture. But we have come to Los Angeles for another kind of culture.

We visit Tom Lieber, an old friend of Richard's now living and working in Pacific Palisades. For 35 years Richard and Tom have been traveling parallel lives as artists. The way way ups and the way way downs of what happens when the creative life is chosen…"not for everyone" as the sign on the door of Herman Hesse' Magic Theatre says in Steppenwolf. "For Madmen Only."  Agreed and well said. Richard is tasked to write an essay about Tom's work, another chapter in their adventure. Tom and partner Cheryl live beautifully amidst Tom's work and the lassos of his and Cheryl's accurate and coherent eyes they have for contemporary art. So carefully chosen, every piece is a passport to strange worlds unfamiliar yet glamorous. Last night's dream may show up in real life as you turn the corner from one room to another. Tom has long been a collector of antique furniture—not the top of the line Chippendale or Hepplewhite stuff, but quirky hand made things with the patina of use and age — like a stack of short benches, some painted, some honeyed wood. Picture a shelf crowded with old-time shaving brushes.

Consumer culture gives us worlds within worlds of accumulation and it's a fine thing to encounter the carefully curated objects at Tom and Cheryl's that stir the psyche and the heart at once, so, we were primed for the exhibit of Clare Graham and MorYork.

On Wilshire Blvd, right in the heart of LA, life-size sculptures of mammoths roar up out of the belching methane of the asphalt ooze at the La Brea Tar Pits. 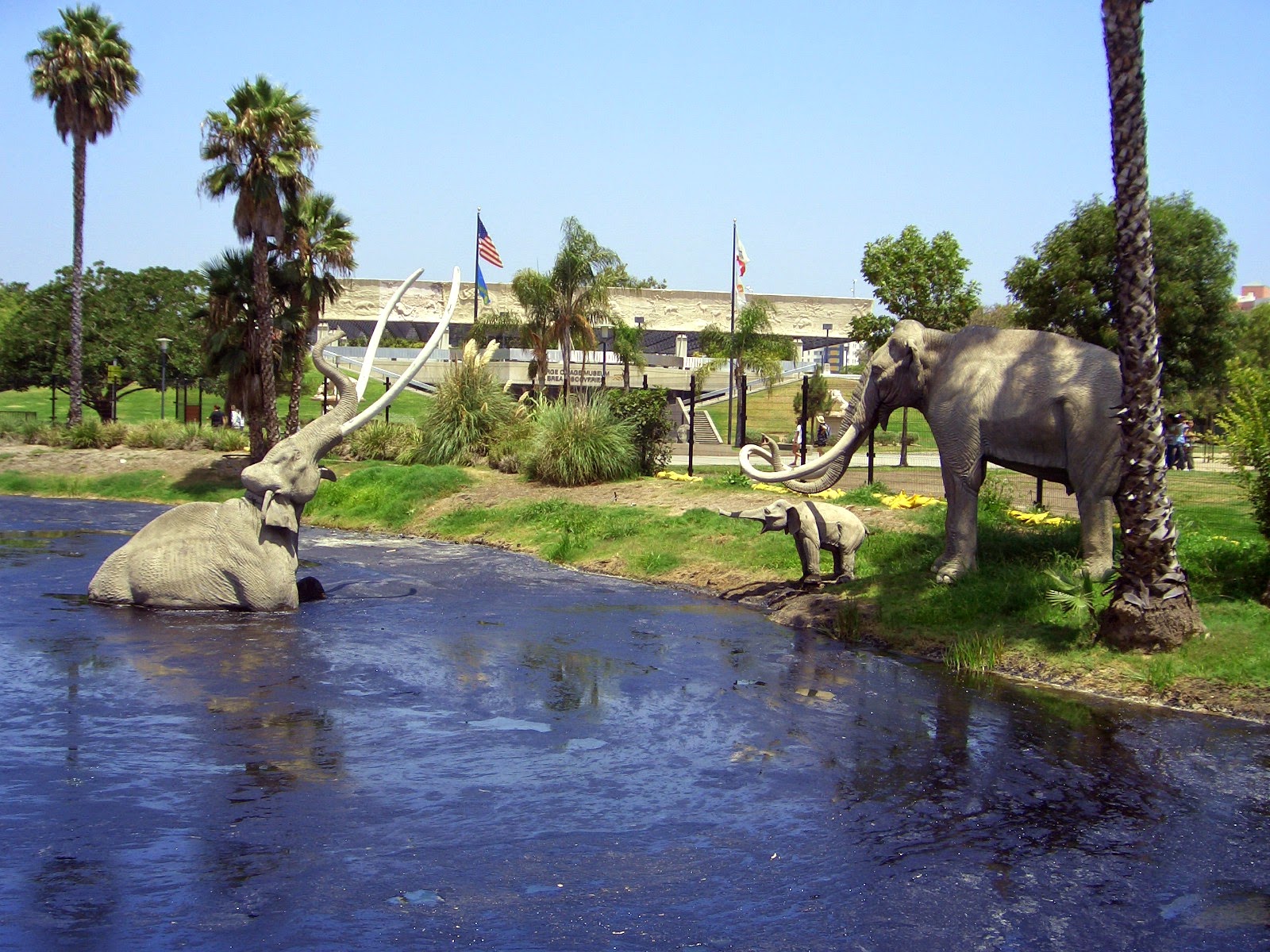 Right across from the tar pits is the apotheosis of accumulation at the Craft and Folk Art Museum. Stuff that falls away from us into a kind of tar pit of oblivion. Clare Graham resurrects, for example, quantities of pop-tops from soda cans (hundreds of thousands) sculpted into furniture. Wunderkammern are filled with unexpected delights like shelves of used paint brushes all on edge like the fur of some beast. Hundreds of Teddy Bears saran-wrapped into towering totems. As Graham says, "Materials are assembled in vast numbers so that they take on form and substance beyond the single unit appeal." Yes, indeed!!!

Makes us think about making one sculpture — one big pile of every piece of plastic we have ever collected from Kehoe Beach. We're thinking of making an exhibit called All of It. 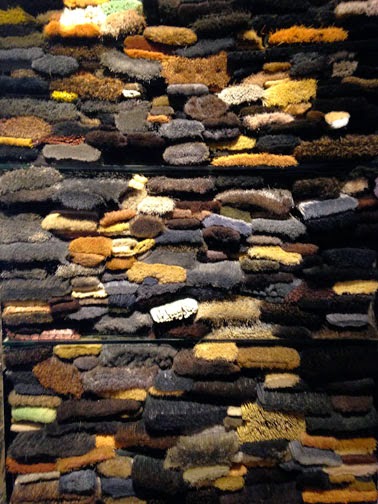 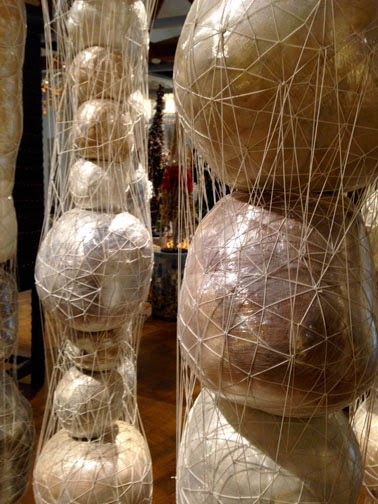 When crooners sing and poets muse about Southern California, the beaches of San Diego are what loom in the imagination. The romantic notion of towering palm trees, balmy breezes and gorgeous sunsets are the reality, as is the tectonic reality of ever changing landforms. Here's a paean to So-Cal, riffing on Rembrandt's Three Trees. 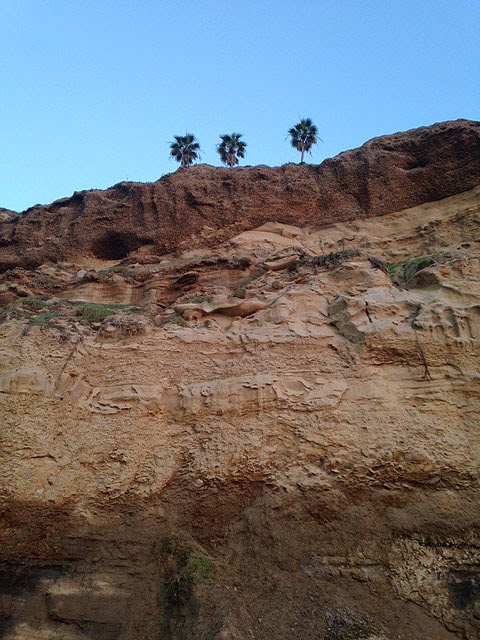 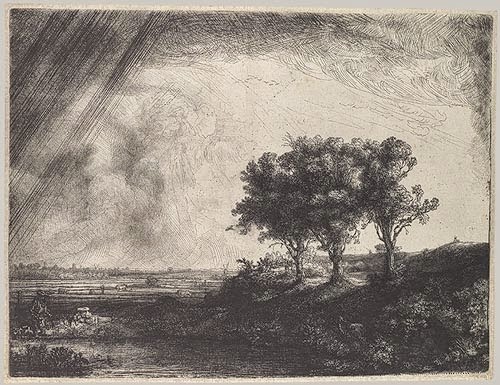 To celebrate the winter solstice we head to Carlsbad Beach with Janis (Judith's sister) and Paul (brother-in-law). Janis has become an avid beachcomber and collector of plastic. She photographs the plastic in place on the beach and frequently contributes to Litterati the "digital landfill." In 2015 she will be presenting an exhibition of her work at the Bay Model in Sausalito.

Right away Judith found a pink Barbie doll high-heel shoe (hey, this is going to be fun!!!) and soon thereafter a toy soldier (wow, what a beach!!!) The competition between the sisters was off and running. Sibling rivalry—call it what you will, these sisters are game for the game. 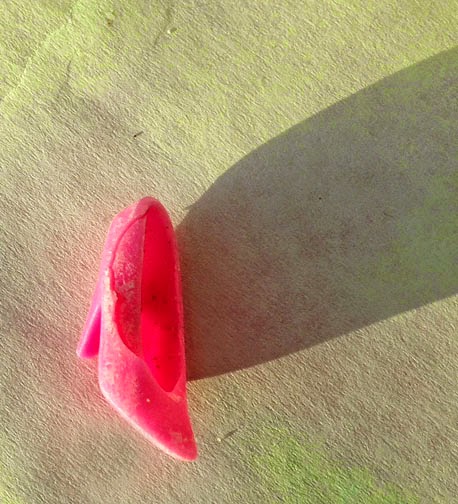 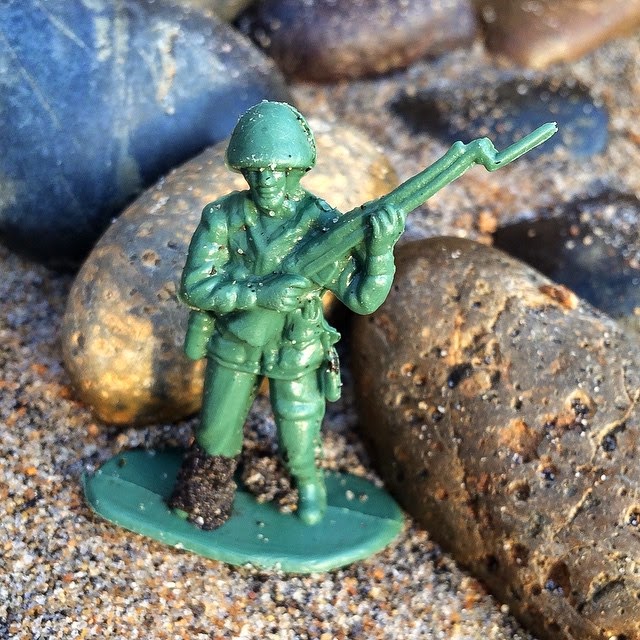 When Janis found a soldier she danced with both arms raised in a faux touchdown six-shooter dance of joy. Pow-Pow-Pow. When Matt Simms NFL player danced that "gun simulation" he was fined $7,875.

At LACMA James Turrell's Breathing Light was a highlight (so to speak). As you let the slowly changing light of the work wash over you, you find yourself caught in an existential Never-never Land of no time, no space. Viewers are given fifteen minutes to bask in the glow. Richard, ready to be in there forever, was gently led away by a guard. 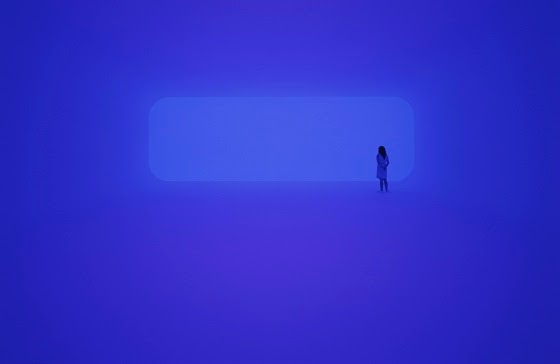 And then at dusk we enjoyed the vintage street lamps of Urban Light by Chris Burden at LACMA's entry pavilion. 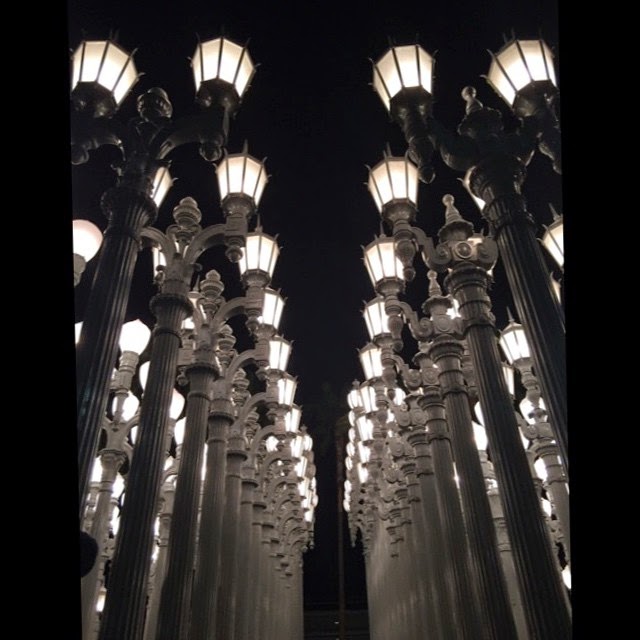 In Oceanside, home of Marine Corps Base Camp Pendelton, we found at the Oceanside Museum three surprising exhibits. Neil Shigley's giant woodcuts of homeless folks, breaking the silence of these all too often invisible people. Nudes from the Bram and Sandra Dijkstra collection—he is one of our favorite art historians who's written beautifully about the WPA project in American Expressionism. Plus, given our Southern California sojourn, we were engaged seeing the traveling exhibit California Dreaming. Judith especially liked a 4-part series of photographs—tops of the heads looking like arial shots of wheat fields with dark hair roots growing in contrast to the bottle blond-ness.

And speaking of light (tis the season) in La Jolla we were awe-struck by the architecture of Salk Institute. Designed by Louis I. Kahn, the building itself and the mission of the Institute, is definitely a point of light. It's a monument to our highest values of curiosity, discovery and good works. The sisters raise their hands in praise. 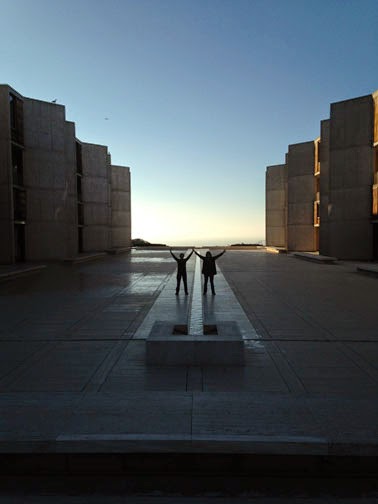 As the astronomical event of the solstice passes we are relieved to be turning once again towards the light. We are blessed to have such great friends and family and to be in California Dreamin'. A line from Anna Akhmatova comes to mind: Sunset in the ethereal waves: I cannot tell if the day is ending, or the world is ending, or the secret of secrets is inside me again. 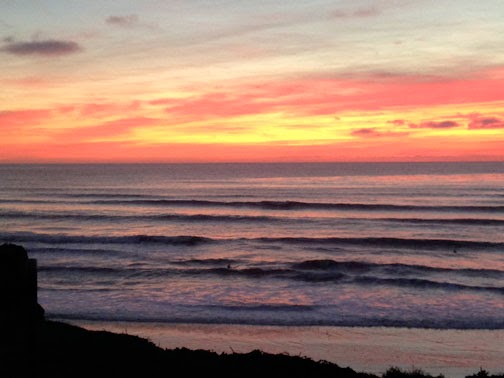 Out to Sea? The Plastic Garbage Project organized by the Museum für Gestaltung Zürich started its journey in 2012. Our nurdles and pieces of micro-plastic are included in this traveling show that continues on to Beirut, Casablanca and Amman.

To keep up to date:
https://www.facebook.com/PlasticGarbageProject