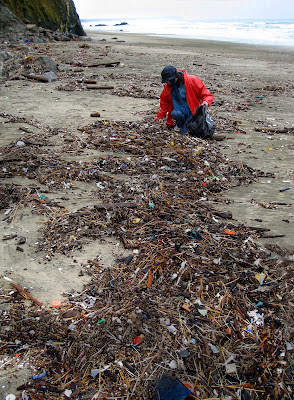 The end result of hyperbole, while poetic and attention grabbing, ultimately leads to skepticism. Our pictures from Kehoe Beach, Point Reyes National Seashore show no hyperbole is needed. The evidence is in. What washes up on this one beach is repeated everywhere on earth. This picture is from a cove at one end of “Ten Mile Beach” the eponymous strand filled from one end to the other with scenes like this. It’s heartbreaking, and it is our call to action. Relentless use of disposable plastic must end.

The news of plastic jetsam most igniting the public imagination is the story of the “North Pacific Gyre” and the great “Eastern Garbage Patch” which had been predicted in 1988 with a report from NOAA (US National Oceanic and Atmospheric Agency) based on coastal findings off Japan, Alaska and Hawaii. After Charles Moore’s famous Algalita voyage in 1997, an area of plastic debris north of Hawaii was described as “an island bigger than Texas” or, “twice the size of Texas”, or “bigger than Brazil.” Images of a giant “eighth continent” filled the public’s imagination—effective images, all. But the press and the blogosphere have climbed on board belying the extent of the mess. There is no Google map that shows the gyre from space, and to those who would discredit the extent of the plastic pollution—if it’s not on Google maps, it doesn’t exist.

The end result of hyperbole, while poetic and attention grabbing, ultimately leads to skepticism. Plus, if the Gyre were a densely packed, visible Cyclopean floating raft of plastic, it might be possible to clean it up. The reality, gleaned in the summer of 2009 from trips to the Gyre by Project Kaisei, Algalita, and Scripps Institute of Oceanography, confirm that it would be better described as a continent-sized bowl of plastic soup, a minestrone of tiny plastic bits. And, it can never be cleaned up. We’ve all watched as waste and water swirls down our drains. The Gyre is a prodigious drain: problem is, there is no planetary sewer pipe. 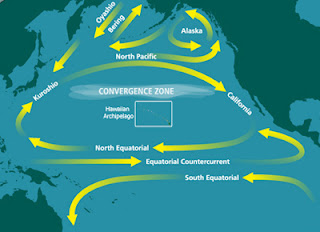 Posted by Beach Plastic at 2:21 PM No comments:

We are all grateful for the “Keep America Beautiful” campaign to curb littering. The tag lines:
“Don’t be a litterbug”
“People start pollution, people can stop it”
“Every litterbit hurts”

Highway signs warning of $1000 fines for littering brought responsibility to the public. It was an effective campaign and good to bring consciousness to the problem of litter. Litter
really was a problem. Still is. In the TV series Mad Men we were jolted by an early 60's picnic scene of historical realism where the mom casually shakes out the blanket on the grass—papers and cans go flying. Something we would never do today. Dutifully and virtuously we throw trash into waste bins and even separating things into compost, recycling, and garbage. 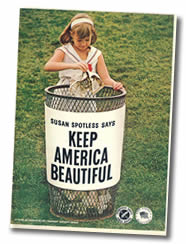 But under the recast convention of keeping America beautiful the real action came when "bottle bills" found their way into public legislation. Manufacturers were scheduled to become responsible for the "no deposit-no return" containers. Fees were to be added to beer and soft-drink containers. The “Keep America Beautiful” campaign pointed the arrow of responsibility away from manufacturers and 180° back to the consumer. A very good move for profits and a very bad move for our world. Bottle bills were defeated over and over again—even recently in California where producer responsibility was cast as a culprit in "job loss." 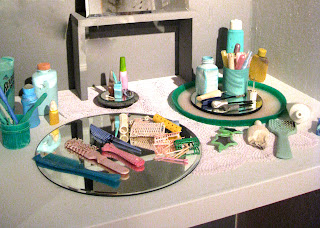 We created Beauty Bar for an exhibit at the Berkeley Art Center. All of these beauty products came to us washed up on Kehoe Beach on our 1000-yard stretch of beach. To really Keep America Beautiful we must become aware of green washing and point the finger back at producers.

Why do we insist profits are more important than posterity?
Posted by Beach Plastic at 6:52 AM No comments: 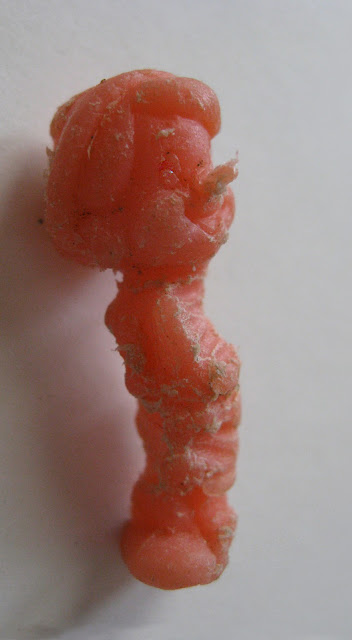 We’ve chosen Pinocchio to act as our ringmaster. This tiny bit of flotsam looks like he’s been at the mercy of some deep-sea toothy-ness—maybe he really was swallowed by Monstro the whale. Gnawed and sand-rubbed, he’s been on quite a journey.

And, when you think of Pinocchio, how can you not think of his telltale nose, signifying a lie? So, our little Pinocchio, even though his elongated schnoz has been chewed off, reminds us of the big lie — plastic is cheap and disposable. Where is the away as in “throw-away”?

The “free” plastic bag taken from the supermarket is not free:

• Production costs: plastic is made from non renewable fossil-fuel resources: natural gas, coal or petroleum. Costs include mining and drilling, environmental mitigation costs, transportation and manufacture of many toxic additives.
•Consumption costs: plastic bags alone account for $4 billion in costs to retailers. Who is paying that bill?
• Disposal costs: this includes litter, collection, incineration, landfill management and the added load of dangerous toxins to the environment.

How about that reusable bag left in the car—again?? We need an honest accounting for the true costs of plastic, right, P’noc? And, by Jiminy, always let your conscience be your guide.

Posted by Beach Plastic at 6:41 AM No comments: 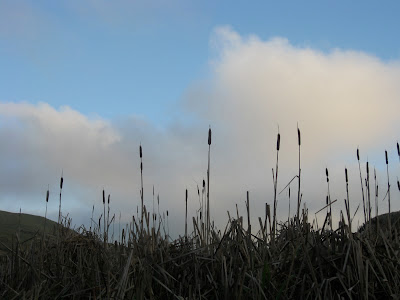 We've been talking with each other lately more about “place” than “plastic.” Plastic pollution, the trash we pick up, one piece at a time gets us to the beach to add to our collection, but foremost among our desires is the lean we have to be in a place that is intact—unspoiled by the industrial global market place.

Where the plants and animals are shaped by the forces of natural selection; where the terrain of the landscape is shaped by forces of plate tectonics- and were it not for the sweeps of plastic shrapnel washing in, it’d be perfection. 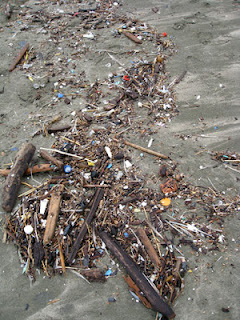 On the trail to the beach where the ground has been continually disturbed, we do walk through a slough of invasive species: European Mustard and Hemlock and Italian Thistle. And European Beach Grass was planted to stop the motion of the dunes doing more harm than good. Now a pilot program has started to remove the invasive grass.... it’s a great experiment to see if a place can be put back to natural. 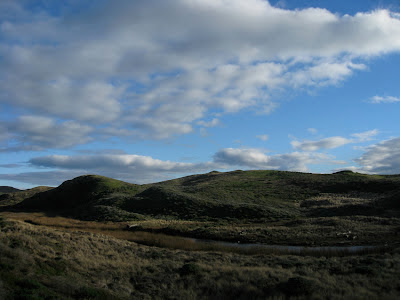 Despite a few flaws, all in all, this National Seashore is the most "right" a place can be. In spring the marsh thick with native Cattail and Tule is whirring with the calls of Redwing Blackbirds. Last summer we saw a pair of Tundra Swans flying back and forth over the marsh. Long necks like arrows. And as the crow flies, this place is only 25 miles from downtown San Francisco.

Posted by Beach Plastic at 1:07 PM No comments: