What are the chances?

These days drapes are passe — people want wide open views and especially when they include massive trunks of heritage California Oaks punctuated with squirrels leaping limb to limb in a scurry to gather acorns. So when the realtors of my dad's condo in Rossmoor said the drapes had to go, down they went but it seemed a shame to toss out the yards of fabric.

When I heard that Toni Littlejohn was hosting a workshop where artist ocean lovers can create prayer flag offerings for Michael Stocker's Ocean Conservation Research benefit art sale, I thought the expanse of white cotton drapery lining would be a perfect material for the flags.

Toni agreed and in appreciation served up a delicious lunch accompanied by a free ranging conversation. She regaled me with stories about visiting with the friendly whales in San Ignacio Lagoon in Baja and about swimming literarily and figuratively in the pre-dawn light in Tomales Bay. She had wise words about what it means to be feeling and getting older and the benefits of ping-pong's lively back-and-forth.

As an abstract painter Toni enacts, through her work, the vitality of gesture. So when I mentioned Varnedoe's "Pictures of Nothing" a transcription of his A.W. Mellon lectures we spun into an appreciation of Pollock. "Pollocks work allowed for the forceful expression of chance in the way the paint fell uncontrollably in spatters and rips across the canvas, dissolving traditional distinctions between figure and ground."

Toni's was thrilled to show me  Mars: The Pristine Beauty of the Red Planet.  Page after page of close-up photographs of Mars taken by the most powerful camera ever sent to another planet. The astonishing detail reveals surface patterns that have an uncanny similarity to Toni's large scale paintings and to wave patterns of sand on the beach.

After a relaxing visit with Toni, I headed for the beach. It had been awhile so I was surprised to hike the high and dry new trail that parallels above the old trail that slogged through the marsh. You take the high road... 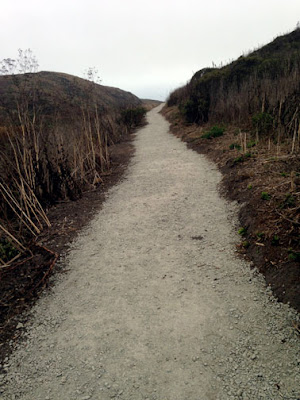 On the beach there was plenty of the regular littoral litter: water bottles and bottle caps, tipparillo tips, shotgun wads, balloons. In a shock of color, against the fog and muted gray of the sand, a rare find — a fuschia elephant. 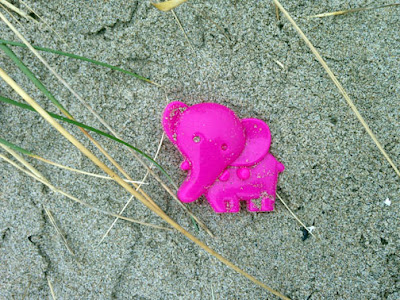 As I packed it into my collecting bag, I felt triumphant and could have headed for home. But I was intrigued by the sight of an new sweep of sand at the cliff end of the beach. The usual rubble of rocks was gone. A great mystery— were they were washed away? or they were covered by sand that had made its way to the beach? Went I bent closer to inspect, I discovered a snarl of string and fabric. As I unfurled the mess, I shuddered at the miracle. Never in almost 20 years of collecting plastic from the beach have we ever found even one flag but there they were— twisted and turned, a long string of tattered flags that had been buffeted by the wind and the waves. What a strange and glorious serendipity. 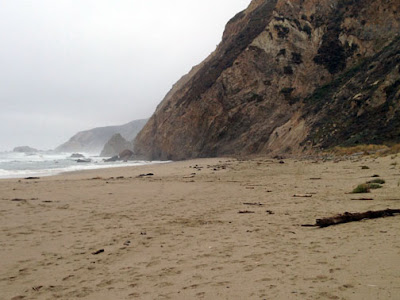 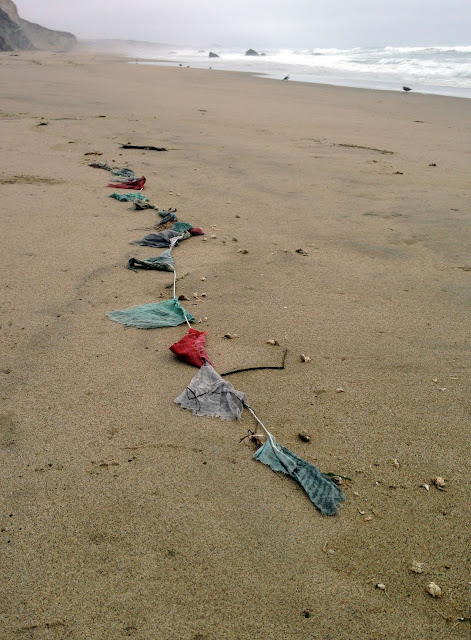 Call it portend or premonition,
an omen, a blessing, a great prayer.

When presenting our artwork, we are often asked if we have done something to the color. Never!!! From the brilliant hue of that fuschia elephant to the bright red of bottle caps we are always amazed at the vibrancy of what catches our eye and how the color and texture of plastic stands out from the sand. For our Kehoe Beach Prayer Flags we were inspired by the vivid colors of Tibetan Prayer flags and their meaning. Blue symbolizes the sky and space, white symbolizes the air and wind, red symbolizes fire, green symbolizes water, and yellow symbolizes earth.

During our 20 year-long project, collecting plastic from Kehoe Beach, we've been on an ongoing quest to find out how an aesthetic mind transforms plastic pollution into something meaningful, something beautiful to see. Along the way we've met the texts of powerful thinkers like Mary Douglas, Emile Durkheim, Mircea Eliade who all probe the question, what is allowed inside the Temple, the sacred space, and what must remain outside as the profane, as the "dirt?" We wonder if there is there an alchemy in the creative process linked to transformative action?

After collecting over three tons of plastic from one beach we have tuned the simplest action of picking up trash to the highest value of re-enchantment. After all, we call our practice "Stoop Yoga" having bent over and picked every piece of plastic, one piece at a time, depicted in the pictures on these flags.

The flags will fly at Toby's Feed Barn in Point Reyes, November 11-18 and will be sold at a special event on Nov 18 at 2 PM.

Michael Stocker, founder of OCR, is a renown expert on sounds in the ocean:
"Ever-increasing ocean noise pollution is affecting all life in the ocean. Loud noise from expanding military, industrial, fossil fuel and off-shore energy activities in the sea is creating an "acoustic smog" that is increasingly deafening all marine animal. OCR is seeking policy and practice solutions to this growing dilemma"

Posted by Beach Plastic at 3:51 PM No comments: