Back in April we were contacted by TerraCycle about a special project to collect beach plastic that would be used in the making of limited edition bottles for the worlds  #1 shampoo brand Head & Shoulders. Proctor and Gamble is championing this experimental use of beach plastic in an effort to find a way to use some of the estimated 5.25 tons (and counting) pieces of plastic cycling around the gyres and winding up on beaches.

With a swirl of family obligations and an eclipse trip to Oregon, this summer we have been on the go and slow to fill the super-sack shipping bags TerraCycle provided. Almost full, we hoped to top them off on Coastal Clean Up Day. Marilyn Englander who has been the beach captain supervising the Coastal Commission's cleanup day at Kehoe for eleven years offered to separate the plastics from the trash so that we could finally get our bags on their way TerraCycle.

Typically this late-summer time of year plastic can be scarce, plus on Coastal Clean Up Day the competition can be fierce. Not only is there the vying for who can get the most there is always the quest for the most unusual. Along with the typical finds, every year there is always something strange and something outrageous.

Among the people who come out for Coastal Clean Up Day there is heartfelt camaraderie. To be with kindred spirits gathered together in devotion to cleaning up the planet is an uncanny pleasure and especially when enjoying a beautiful day with old and news friends. This premier volunteer event is a time to step away from our screens and the multiple distractions of our daily lives and into the restorative beauty of the nature.

Some two and a half millennia ago The Buddha coined the term "monkey mind" to describe the capricious, easily distracted mental state of “Kapicitta.” He defined it best when he said; "Just as a monkey swinging through the trees grabs one branch and lets it go only to seize another, so too, that which is called thought, mind or consciousness arises and disappears continually both day and night."  Accompanied by the chattering monkey of our internal monologue, with all of that noise, it is almost impossible to be present and focused on the moment. Instead we are carried away. We give our attention to too many things at once. We rush from one thing to another, focusing on what we are yet to do instead of what we are currently doing. There are dozens of trees with enticing fruit for our monkey to chase.

For a calming look at dispelling the monkey, watch this Danish woodworker actually make a toy monkey.

This is the exact opposite of "monkey mind" in case you were wondering.

On Coastal Clean Up Day there is only one thing in mind — picking up trash. To pick out (and up) the tinniest flecks that look like food to birds and the heavy snarls of entangled rope that trap marine mammals, collecting trash requires a particular kind of selective attention. Being on the case, eyes scanning out to the horizon and beyond.

The Mercury News reported:
"With about 80 percent of the nearly 1,000 cleanup sites reporting data by 5 p.m. Saturday, Eben Schwartz, marine debris program manager at the Coastal Commission, said 54,101 volunteers had collected 533,671 pounds of trash, including more than 23,000 pounds of recyclables. Typically, about 75 percent of the take is plastic, Schwartz said, and pulling it out before it has a chance to degrade prevents it from adding to the 51 trillion plastic bits the United Nations says are filling the oceans and being eaten by marine life."

Although our stalwart team of eleven at Kehoe Beach might be by comparison a small group, we were mighty and dare we say, head and shoulders above the rest. We brought in 90 pounds off the beach: 28 pounds of trash and 62 pounds of recyclables that included 7 Handi-snack cheese spreaders, 2 Starbuck's coffee cup plugs, 1 Superball, 1 tiny toy horse, 41 shotgun wads, 5 shotgun caps, 2 shotgun shells that filled our Terracycle super-sack to the top. 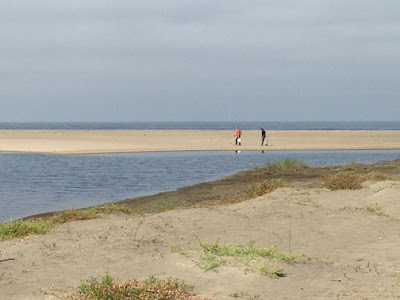 The mediation of picking up trash has its corollary in actual meditation, of which we are big fans (is being a fan of something very Buddhist? Probably not.) Actual meditation is more like don't just do something, sit there. The previous sentence is a good QED of monkey mind in action.

Posted by Beach Plastic at 9:26 AM

Every year around this time, with Coastal Cleanup Day (September 16) on the horizon, many opportunities to show and share our work wash in.

We are forever grateful to Doug Woodring from Ocean Recovery Alliance for his efforts to promote our beach plastic project. These pics just in from his  Big Why Talk at UBS Hong Kong about his Zero Waste Initiative . 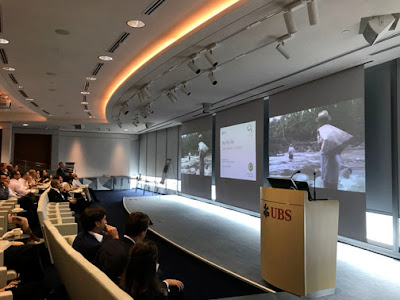 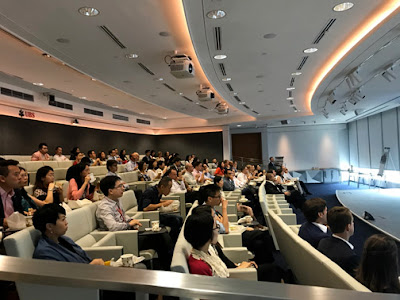 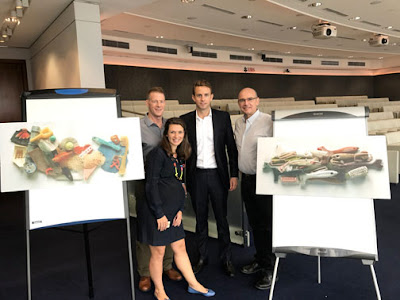 In conjunction with our exhibit at the Fairfax Library, we are presenting an evening discussion with colleague and friend Michael Stocker from Ocean Conservation Research. 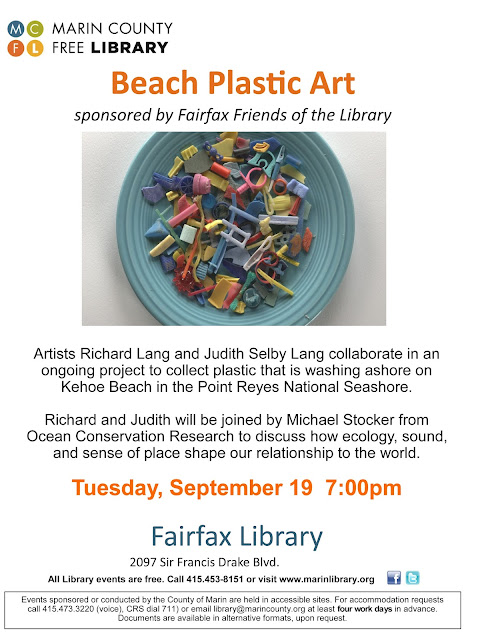 To enrich the Tidal Response exhibition, the Petaluma Art Center is presenting a variety of related programs and activities, including a panel discussion on the relationship between art, science and the environment; a book signing of the newly published A Life Among Fishes; and demonstrations of both Gyotaku (Japanese fish printing) and 3D modeling of undersea coral samples. 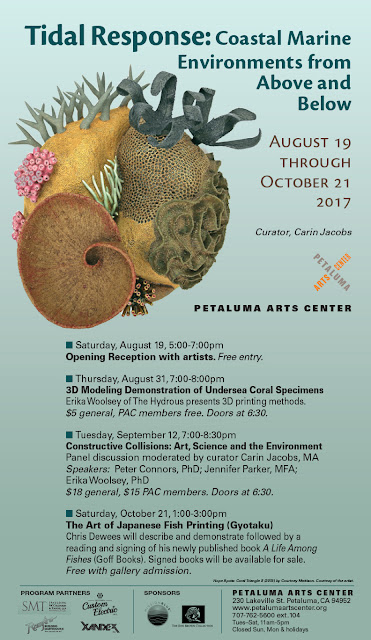 Bay Day, October 7 is the official day for residents, businesses and community organizations to celebrate the beauty and diversity of all San Francisco Bay life. We are working with Save the Bay to provide beach plastic supplies for art activity tables that will be set up at Jack London Square and The Yard SF.

On Coastal Clean Up Day, September 16, there is someplace for everyone — be it a watershed, creek, bay or beach. Check the map and find a nearby location. For more about how to participate: https://www.coastal.ca.gov/publiced/ccd/cleanup/#/map 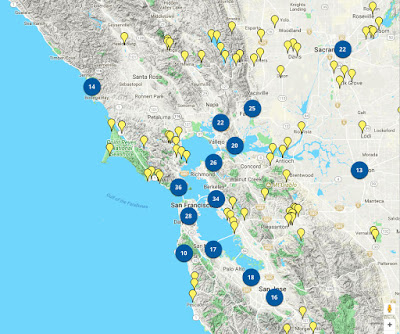 Posted by Beach Plastic at 8:56 AM

The byline for the Marin County Free Library is My choice for leisure, learning and living. On Saturday when the thermometer in the car topped out at 111° cooling should be added to that line up.

Just to be sure that you know that you are welcome, the library has posted this sign on the front door. 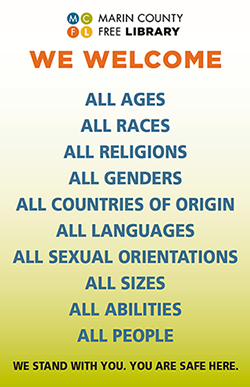 We say that when we go to the library that we are shopping for free — books, magazines, videos, even a seed exchange — the range of free resources is vast. Especially now that we are clued in to the Link+  service that extends our reach throughout California and Nevada, it seems like almost any book on the planet can be borrowed. Need a special book? Wait a day or two and it will be delivered to the library and available for use  — free. 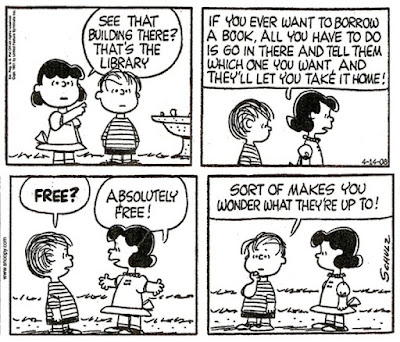 When the grands come for a visit, tops on their things-to-do list is a stop at the library where they can load up on picture books and youth-friendly videos. Hey, kids fill your bag we are shopping for free!

We are thrilled to present re:Purpose Bricolage in a such a cool and welcoming place. Big thanks to Marcia Steiger, exhibits coordinator, for the opportunity to show our work September 5-30.

On Tuesday, September 19 at 7 PM we will talk about our devotion to Bricolage. The term comes from the French, Bricoleur that refers to a jack-of-all-trades, a handyman who is able to "fix it" or "make do" with what is at hand. We will join forces with Michael Stocker from Ocean Conservation Research who will talk about sound, ecology, sense of place and his recent book Here Where We Are.

Unaccountable Proclivities, a series of photographs of beach plastic arranged on Fiestaware plates, are on display in the meeting room. 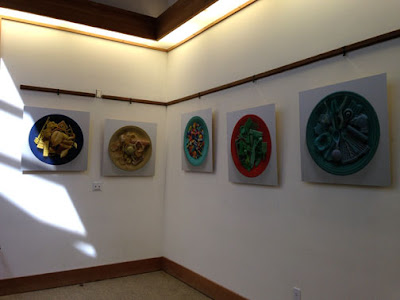 On the wall behind the librarians desk Richard presents 20 bricolage repurposed pieces of "junk" dug up in the garden or found on the grounds of Rancho D. 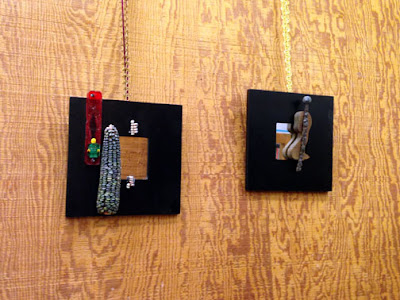 On the back wall behind the bank of computers Judith displays After Cy an homage to the humble library pencil and to the obsessions of artist Cy Twombly. 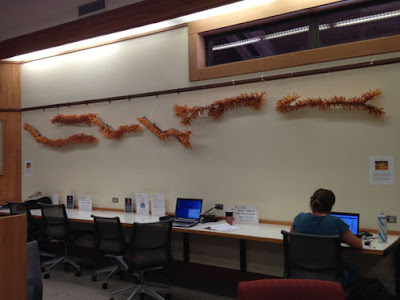 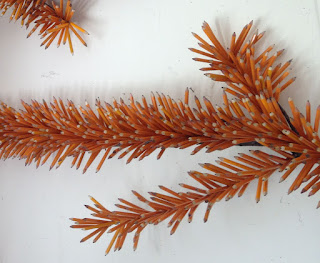 Posted by Beach Plastic at 8:33 AM