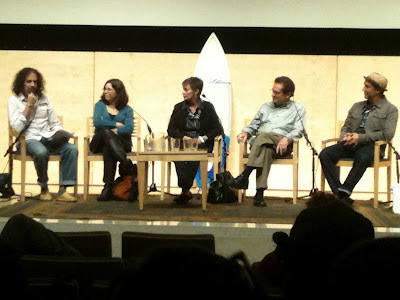 Although there were many, many more words spoken than One Word- Plastics, nevertheless "plastics" was THE word in this lively discussion.

Thanks to Cella Mitchell from the San Francisco Public Library - Main Branch for putting together a great program and thanks to our colleagues, Manuel Maqueda (moderator, co-founder Plastic Pollution Coalition), Susan Frienkel (author Plastic: a toxic love story), Michael Stewart (co-founder Sustainable Surf) and us (Judith and Richard, beachplastic.com) for putting on a great show.

Special thanks to Chris Jordan for being there in spirit. The evening opened with the screening of the trailer for his upcoming film Midway- Message from the Gyre.

MIDWAY : trailer : a film by Chris Jordan from Midway on Vimeo.

The Plastic in Question is on view on the 1st, 4th and 5th Floors of the San Francisco Public Library – Main until October 11, 2012.

Posted by Beach Plastic at 8:17 AM No comments: 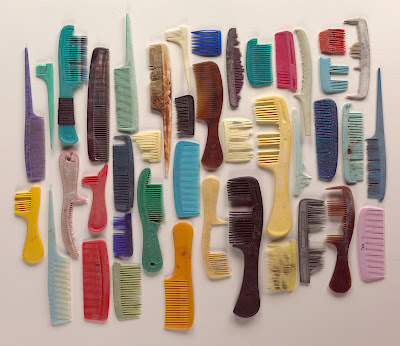 Wherever there are people there are combs. Combs made of bone and shell and ivory survive from 5000 years ago. The first combs were made as decorative ornaments. They not only kept hair in place, but there is evidence that they were used to clean hair of parasites. Speaking of which, some say the bubonic plague was spread by fleas passed along in nit-picking combs.

The plastic comb arrived in the mid-nineteenth century when an early plastic, Parkesine or Celluloid, replaced tortoise shell and elephant ivory. In fact, one of the first uses of plastic was in the manufacturing of combs. Later the "unbreakable" comb arrived in the 1940's made of nylon. 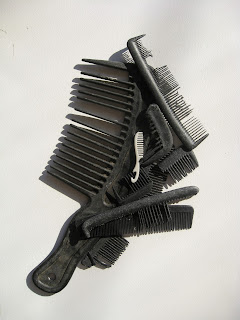 Because of their rarity we particularly cherish doll's combs and brushes. In the welter of combs we've found over the years we have just two Barbie combs in our collection. Imagine finding that tiny toy groomer in the vast expanse of sand and surf;  that tiny thing in the welter of debris washing in. We found a sparkly little comb from a Ty Girlz doll. Cutesy tween-age girls, the main feature is the style-able hair. Hey, com'n get 'em: there's Pretty Patty, Totally Trish, Punky Penny. And just off the assembly line in 2008, you could buy a set of the two Obama Girlz. It was a big controversy when the dolls were named Sasha and Malia, the actual names of the Obama daughters. The Girlz were recalled and are now called Marvelous Maria and Sweet Sydney. An unre-called pair sold on e-Bay for $3000. The dolls are brought to you by the folks who generated the Beanie Baby frenzy.

It's said that combing or brushing the hair is healthful not only for bringing luster and vitality to the hair itself but the act of stimulating the scalp has an acupunctural effect. We don't have data on this idea but it sure feels good to unsnarl the hair and run the nubs of a brush or comb along the scalp. Anyone who commutes would do well to have a scalp massager comb on hand to keep the driver alert.

Posted by Beach Plastic at 6:38 AM No comments: 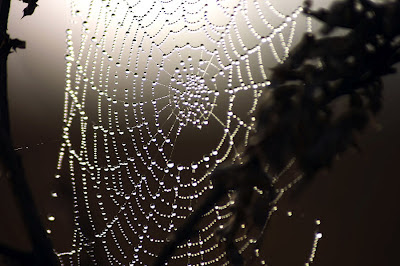 To see a world in a grain of sand,
And a heaven in a wild flower,
Hold infinity in the palm of your hand,
And eternity in an hour.

Since 1999 we have focused our efforts on a single point, on just 1000 yards of beach. We have cast Kehoe Beach in the Point Reyes National Seashore as the stage for a drama that explores ideas of (dare we say it without irony in this postmodern world?) love and beauty. This pinpoint of land is an exemplar of the planetary problem of plastic pollution.

William Blake’s lines from the beginning of the Auguries of Innocence was a precursor to John Muir’s famous line, "When we try to pick anything out by itself, we find it hitched to everything else in the universe." In the science of Holography the illusion of 3-D images are achieved where every point of the image reflects all other points. Each point is a full image of the whole. Indra in Hindu mythology lays an infinite net over the universe where at every juncture a jewel hangs reflecting all other jewels.

Kehoe Beach is our jewel on the net and the site of our ongoing investigation. We have taken up the study of geology, botany, biology, along with the history and development of polymers and plastic. One interest leading to another to another as a perfect example of how everything is connected to everything else.

Posted by Beach Plastic at 5:58 PM No comments:

The Plastic in Question 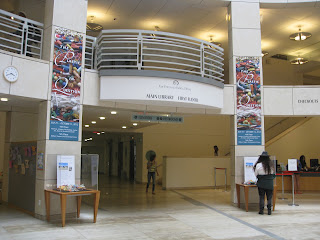 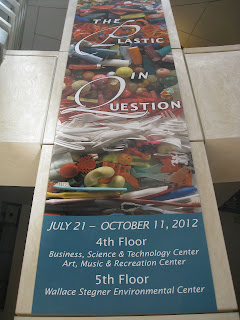 When invited to present The Plastic in Question at the San Francisco Public Library Main Branch we were excited by the challenge of creating a show that would speak to the diverse library public. We thought the familiar template of a blog post would make our art and ideas easily accessible. Since many library visitors ricochet from the computers to the stacks and back again we had to design the exhibition experience so that the viewer could move through the entire exhibition or they could encounter just one post and come away with a complete thought. The exhibition spans the 1st, 4th and 5th floors, the Stegner Environmental Center and the elevator landings. We created arrangements in vitrines, wall displays with captions and signage throughout. 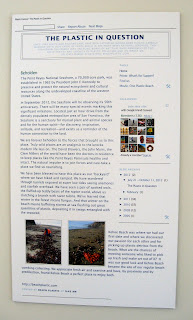 The library has collated an extensive bibliography.
Join us Thursday, September 27 for a panel discussion One Word: Plastics

Posted by Beach Plastic at 8:59 AM No comments: