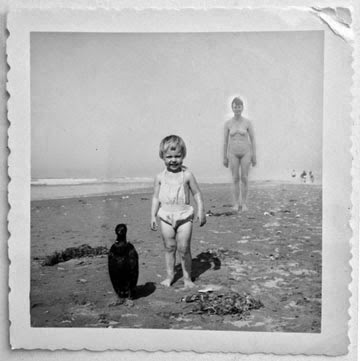 Sans or sands, either way, time is of the essence.

Yes, that is Judith at two years old with the Cormorant, 1952, Seaside, Oregon and yes, now some 62 years later in her birthday suit, 2014, Kehoe Beach, California. Since that first introduction to the glories of sun and surf, the beach has been her place, "power spot" on the planet. On Sunday, July 13, it was reaffirmed with a long trek from Abbott's Lagoon to Kehoe Beach that included an annual skinny dip baptism in the chill Pacific Ocean. And, although a Cormorant did not present herself, many other creatures large and small did.

It was a glorious day that included a soulful rendition of Merle Haggard's The Day I Started Loving You Again, from the troubadour at the trailhead. Along the way there were many natural wonders — the scampering of a Long-tailed Weasel, the dive of River Otter, the flurry of a Northern Harrier on the hunt, bumble bees on the Cobweb Thistle. 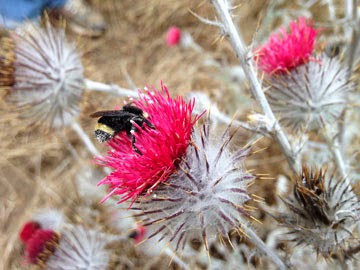 There were special discoveries of a Mermaid's Purse, the expended egg sack for a Skate, 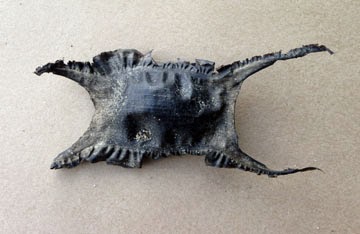 and the feathered nest of some diminutive creature who had taken refuge under the looming shade of a big piece of styrofoam. How about that for a creative re-use? 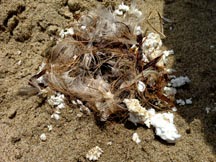 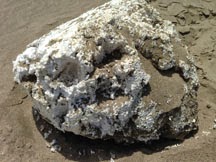 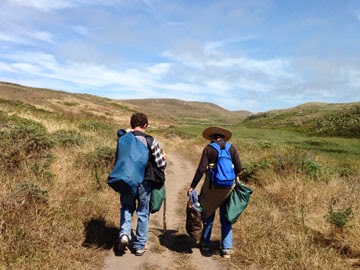 To complete the celebration, there was a birthday balloon on the beach. 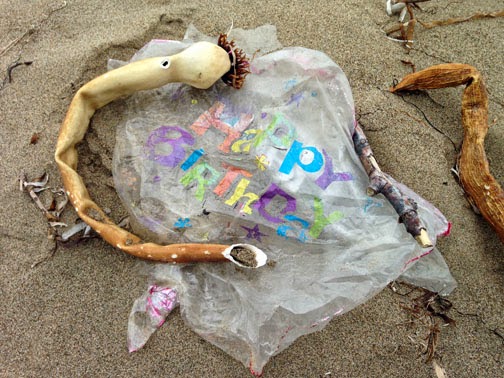 Posted by Beach Plastic at 5:54 AM No comments:

Where did all the plastic go?

Where did all the plastic go?
Coming through our news feed this week was the Los Angeles Times story about the disappearance of plastic so when Janis Jones (Judith's sister) sent an email Richard responded with an emphatic, "Dude. It's in our barn." Since 1999 we have collected tons of plastic from 1,000 yards of one beach. We are heartened to learn that our efforts are paying off: having a signifiant effect on the oceans. HA!
Read the report: Ocean Plastic Patch Missing

Where did all the plastic go?
This year because of the weather pattern, there hasn't been much plastic anyway. We long for the wet and windy El Niño days. Nevertheless, there are many other good reasons for heading to the beach. It's the Fourth of July weekend so everyone and their dogs had the same idea.

The day started with a quick trip for Judith out to Bolinas to deliver a proof print to expert birder Keith Hansen. His shop/studio is must for anyone interested in our feathered friends. His scope camera focused on a humming bird feeder gives an eyedazzling look at the quick flash and shimmer of those fast wings. For years Keith has been painting birds. His recent book Birds of the Sierra Nevada is the definitive volume on the subject.

Thanks to iPhone technology Judith was able to record the song of a bird calling in the night. Keith identified it as the Western Screech Owl although its song is more melodious than screeching.

Although there has been scant plastic on the beach there are always natural wonders to be found including these talons from a  Red-tailed Hawk? Peregrine Falcon? Hey, Keith- what do you think? 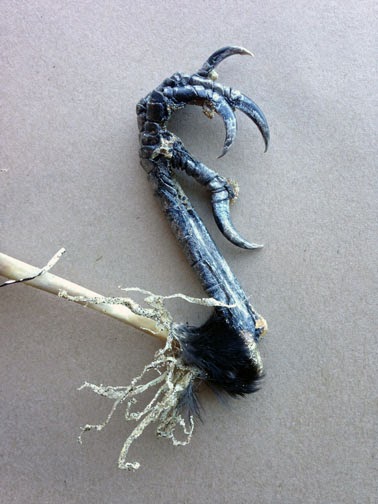 Where did all the plastic go?
Bravo Plasticity!!! Doug Woodring from Hong Kong traveled to New York this week to present Plasticity, a forum for movers and shakers in the plastic biz who have great ideas about where the plastic can go. This convocation brought together the folks who, with boots on the ground, are re-thinking plastic from "cradle to cradle." If we don't take action on their proposals it will be more like "cradle to grave."

Via youTube we were able to tune in. We realize that we are on the action continuum, finally arriving at # 5 in the five stages of plastic awareness. We seem to have fully inhabited the first four, now ready for the last. We are ready to put our shoulders to the wheel in a new way.

1. Surprise at finding so much plastic stuff blotting the beauty of the world
2. Disgust at the short term thinking
3. Rage at profits over posterity
4. Counter the claims of the producers and lobbyists
5. Find solutions using what's given (the marketplace)

Where did all the plastic go?
In Baltimore John Kellert has stopped the flow with a sun-powered water wheel that is collecting trash flowing down the river. Since May it has collected some 40 tons- which means 40 tons that won't end up in the ocean.

Where did all the plastic go?
Researchers also note that recent studies have shown bacterial populations growing on plastic microfragments, weighing them down and causing them to sink. From todays collecting- a great example of the bryozoans and barnacles inhabiting a piece of plastic. 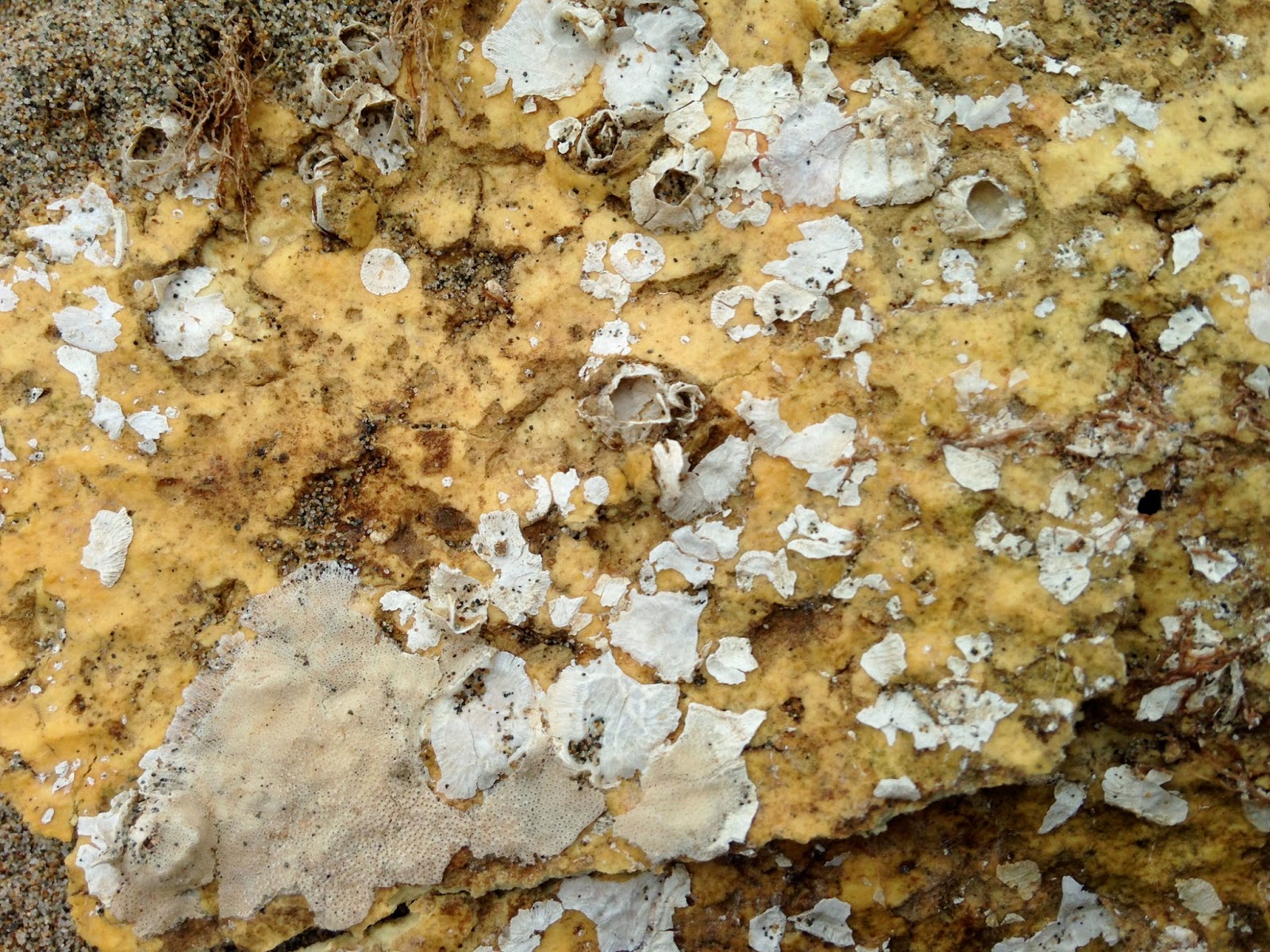 Where did all the plastic go?
It's one more year around the sun. This week is Judith's birthday week- apropos she found a birthday balloon that looks like it definitely has had its share of trips around the sun and sea. 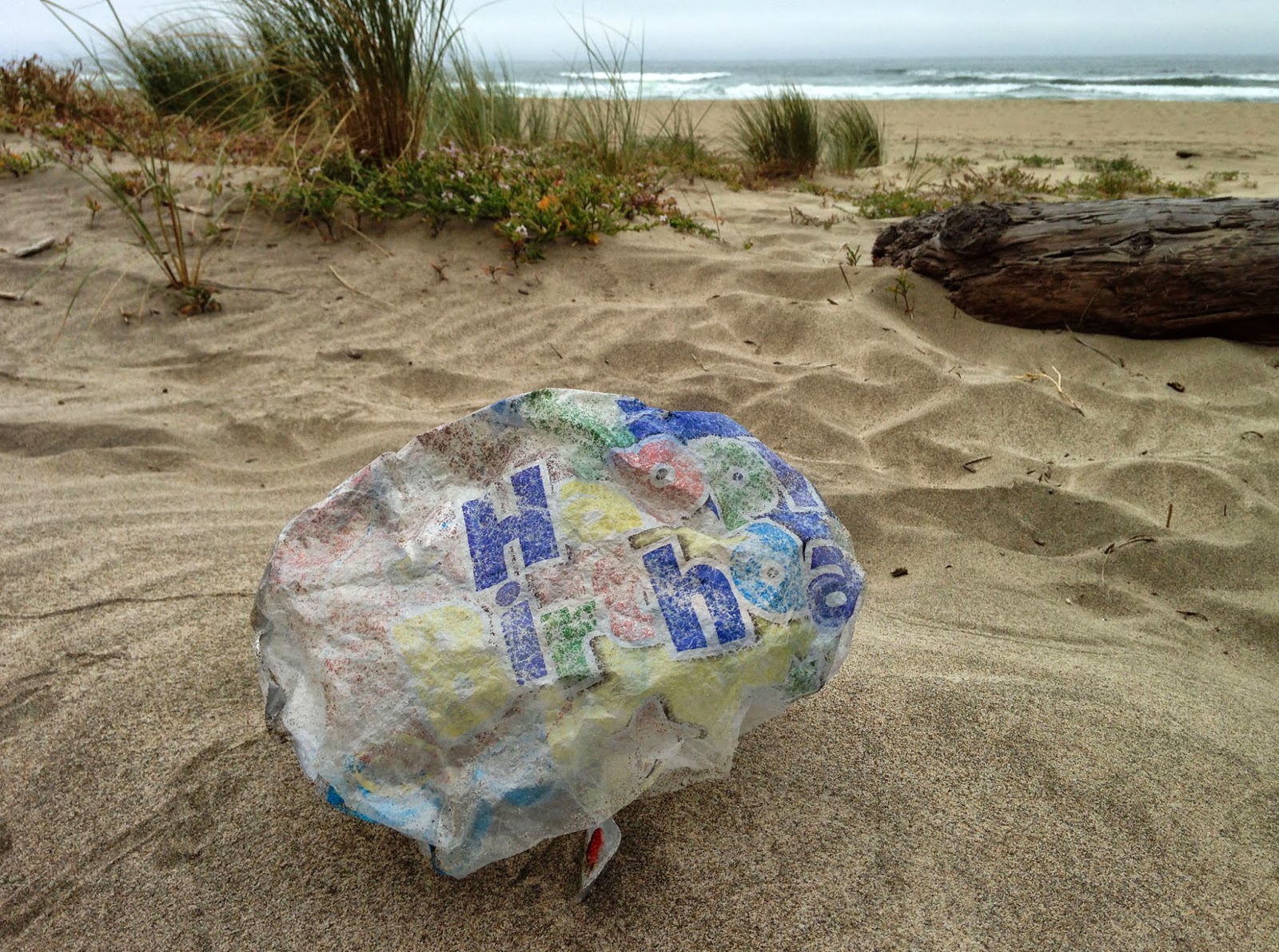