When asked for advice about art making we use the sage words from Jasper Johns 1964 sketch book:
Take an object/ Do something to it/ Do something else to it.

In February we were in The Woodlands just north of Houston for the Inspire Film Festival for the screening of One Beach Plastic the short film about our project. We were on stage for the Q&A and presented a hands-on workshop with the Arts Council. Read our blog report Out There.

Unbeknownst to us, in the audience was Dawn Caldwell, sixth grade science teacher, who took our story to heart and wrote:

"I, like so many others,  am sure, was inspired by your story in One Plastic Beach and have shared the story with my students and our whole, Coulson Tough K-6, community.  We have taken your story to heart and and moved to action and are attempting to "curate" the lunchroom plastic. We are just getting started but hope to be able to create something in time for Earth Day, April 22nd.  We will have an opportunity to auction off our creative something on the 21st and donate that money to bring art therapy to children with cancer at Texas Children's Hospital here in The Woodlands.  I was wondering if as we get closer if you might be able to "consult" with us via Skype or something.  As a science teacher I am doing a great job teaching about the impact of plastic on our planet but... coaching the children to create something visually appealing is intimidating. Let me know and THANK YOU for the inspiration to make a difference and raise awareness for plastic responsibility."

We were thrilled to learn that Dawn was inspired by our film, who in turn, inspired her students to collect plastic from the school cafeteria, naming their project, One Plastic Lunchroom!  Hmmmmm…..we have beach plastic, street plastic, house plastic and now a whole new category — Lunchroom Plastic!

We set a date/time for a Skype. Unfortunately, our desktop computer is so antiquated (circa 2004), after many fits and starts, after much fussing about with Skype and Facetime we settled into an old-fashioned, (circa 1874) phone conversation.

We told the students about our first category of collecting — lids of all kinds, colors and sizes and how we liked the look of the concentric circles. We explained that we use the pieces of plastic like brush strokes on the canvas — and described the wrangling that goes in to every artwork we make, the playful banter, the arguments going back and forth until we finally agree. 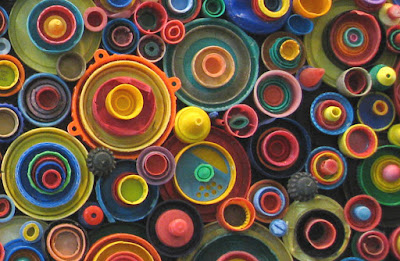 We encouraged the students to just get started.
"Take an object/ Do something to it/ Do something else to it."
— simply begin—the notion is that the human mind is miraculous and wants above all to express itself and to let the materials speak — as you work with the pieces of plastic they will find their own place.

There are no rules for making art except for the idea that the human being has been doing it for ±40,000 years. Imagine the bottle of the human genome with its content label: bone, muscle, fat, connective tissue, art, science & curiosity. We recommend The Origins of Creativity by E.O. Wilson's (Harvard biologist).

Dawn wrote: "With your direction we set up a table right in the middle of our sixth grade hallway with two a white and a black canvas.  It is AWESOME watching the children and teachers and pretty much whoever passes by add a little bit of something."

Here's their creation station with bins of plastic. By letting passersby do something and then do something else, they reached some remarkable conclusions. 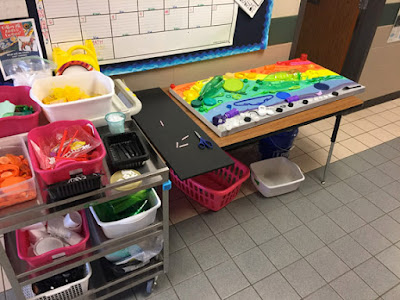 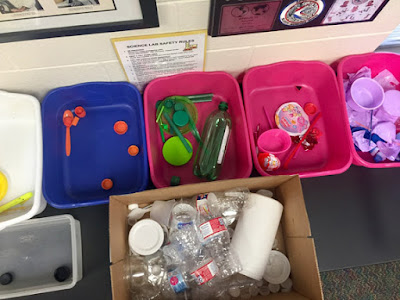 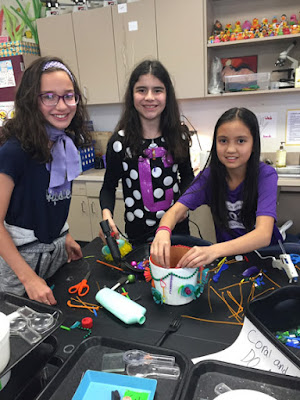 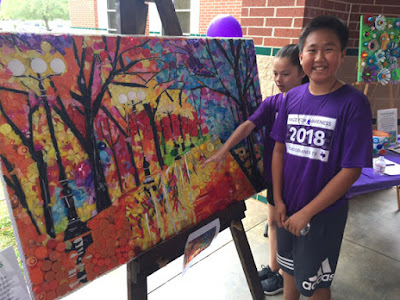 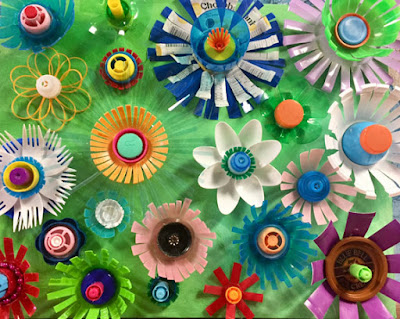 Their fund-raising efforts were a huge success. At the silent auction they raised over $850 that will be donated to the Periwinkle Foundation's Arts in Medicine Program at Texas Children's Hospital.