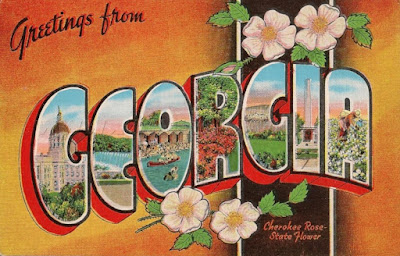 We never imagined when we started picking up plastic trash from Kehoe Beach that we would end up in Columbus, Georgia USA. Neither of us had ever been to Columbus and the only person we knew was by email—Emily Gray Holton chair for the GAEA (Georgia Art Educators Association) conference. But by the end of the weekend, we were embraced by the warm arms of that gracious southern hospitality, making friends galore. 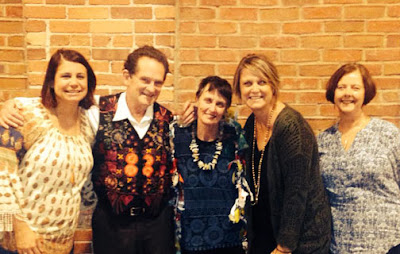 In preparation for our presentation we surveyed artist friends, about their school experiences, about positive/negative teachers who encouraged or discouraged them on the path. Judith, in elementary school in Dallas Texas, had the good fortune of having a dedicated art teacher and dedicated art room. Along with experiments in making batik and hand-sewn book bindings, the bold teacher even hiked her rowdy 5th grade class out to the woods to sit quietly, to observe nature, and to do plein-air painting.

With all of budget cuts (art and music are usually the first to go) art teachers scrimp and improvise materials to have enough to serve their students. Rethunk Junk, the title and theme for the 2015 conference, was planned with workshops, a trade show and us as keynote speakers to give teachers new ideas about how to innovate with materials that might otherwise be considered trash.

We each have had many years in the classroom so we were eager to be with our tribe: maker people who like to make things; who like to make things happen. Teachers who believe that art is an important part of the curriculum — that involvement in the arts improves concentration, confidence and problem solving. And, beyond the skill building, gives a deeper appreciation of that most human experience — making art.

How refreshing to be in a place we have never been so that every vista, every road was the "road not (yet) taken"… 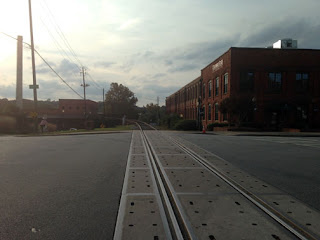 Thursday evening when we walked into the Columbus Museum of Art, the place was rockin'. Conference people (in this case an all-women crew) were in full swing nae-nae-ing and whip it line dances in the museum atrium. We were dazzled by the Museum's collection including the recent acquisition of a Paul Manship sculpture—The Flight of Europa. Like Europa, we were ready for fun. 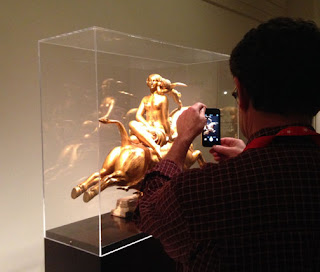 Emily and her intrepid team co-chairs (sister Erin Gray and Denise Marsh) put together an amazing array of hands-on workshops, exhibitions, and events along with many opportunities for sipping and socializing. Richard even picked up the brush. 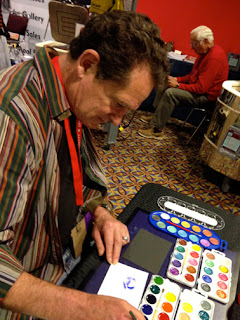 Friday morning we meandered the famed RiverWalk along the Chattahoochee River. We strolled up stream to the rapids and the towering brick edifice that was once the Phenix Mill Hydro power plant. For Northerners and especially Californians, we were struck by the informational plaques that seemed to be placed every 1/2 block memorializing Civil War events. There was more often than not the prominent mention of "Invading Federal Forces" a reminder that the War is still very much alive in the minds of the citizenry. It's a town made of brick, glamorous to we fault-liners who don't see so much of it in earthquake territory. The hotel, a former warehouse, the College, an armory— all from deep red brick.

The conference was held at Columbus Ironworks Trade Center, a magnificent convention facility developed in the city's historic ironworks, where the iron cladding for the CSS Merrimack was forged along with the first breech-loading cannon. Across the road from our digs was Columbus State University that has an impressive state of the art arts facility. And just a short walk over the bridge is Alabama.

Friday evening we wowed 'em with our own brand of hospitality. Our song and dance routine, our power punch of a powerpoint was a hit. Judith even told her naughty joke and they laughed and broke into applause. We offered insights into our creative process and the fun we have at the beach and in the studio.

+"I live my life in growing orbits
which move out over the things of the world.
Perhaps I can never achieve the last,
but that will be my attempt.
I am circling around God, around the ancient tower,
and I have been circling for a thousand years,
and I still don’t know if I am a falcon, or a storm, or a great song."

The next morning at breakfast even the plastic butter cup captured the attention of the conference attendees. What ever happened to the pats of butter on a thin slip of cardboard with a piece of wax paper on top? 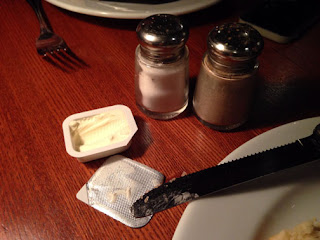 And speaking of butter, we lathered on the butter and poured on the gravy as in Biscuits and Gravy.The ultimate in homestyle comfort food. And Grits, baby! Grits! 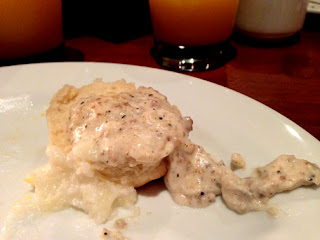 Judith's jewelry was an attention getter. There was much interest in the how-to of the pull tab bracelet and the necklace made of scraps of coffee cups meat trays, and other bits of styrofoam. For more about her jewelry visit her blog.

Any conference that begins with dancers rocking at the Museum and concludes with the Cathy Heller, past- President of GAEA leading a flash mop in a clog dance ensemble that included Waldo, Sunny and Cher and 2 (two) nuns. It was Halloween.

After the evening festivities of the conference we went to uptown Columbus.  We sat in a sidewalk Café sushi joint watching the parade of costumes. Seemed all of Columbus was in the costume-age mode even though we've heard that Halloween is cast as the devil's work (often called Harvest Fest lest Satan be invoked). Lots of clad and scantily-clad folks out enjoying the warm balmy air. A pair of San Francisco style glamour-tranny's sat at a table next to us, seeming to navigate the super-high heels with casual aplomb. Where are we? Then, we knew we were smack dab in the Bible Belt, when we saw HIM strolling through town. 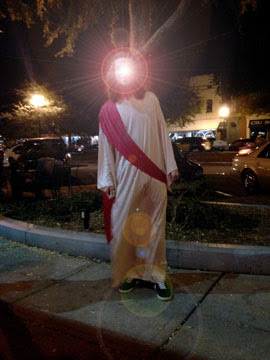 We are grateful that Lauren Christine Phillips while giving us a lift back to Atlanta fulfilled Richard's wish to see some of that famous Georgia red clay. She toured us through the beautiful grounds of Callaway Gardens in the southern foothills of the Appalachian Mountains. The Memorial Chapel fashioned after a 16th century Gothic chapel is where Richard did a hallelujah shout-out for our time in Georgia. Yes, Reverend Lang is in da'house. 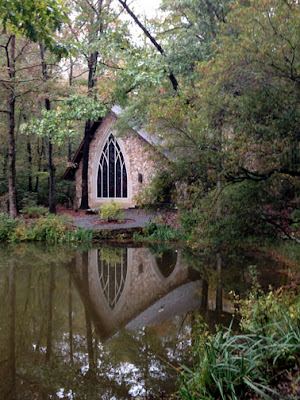 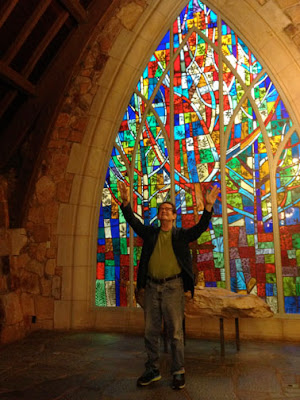 At the airport we were captivated by colleague Pam Longobardi's installation of Drift Nets from her Drifters Project. Pam is a tireless advocate for the oceans and has the high honor of being a Distinguished University Professor, Georgia State University, Atlanta, Georgia. 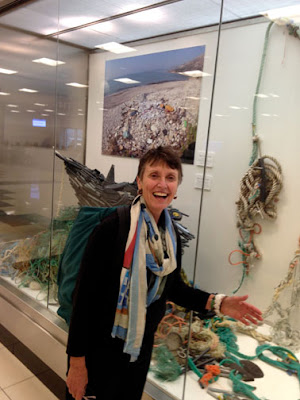 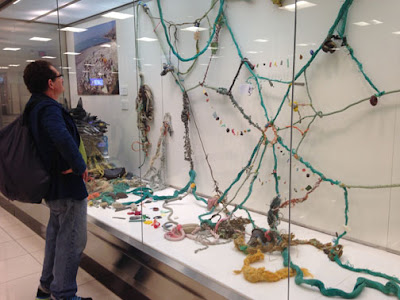 After what seemed to be an interminable flight (with a screaming baby) back to California, we made it home safe and sound. We are sure that instead heading directly west the pilot took us the long way around. We think they routed us through Dubai. Although we were plum wore out by the time we arrived, we are so happy to have brought that rainy night in Georgia home with us — with more rain forecast for today.

We conclude the report from our time in the South with the final word from Emily:

We will always remember the melodic roll of her drawl, the dipthonged vowels, make the word DONE doooneee go on forever.

Posted by Beach Plastic at 2:29 PM No comments:

Most people go blank when they hear the numbers — 46,000 this, one million that  — statistics almost incomprehensible because of their magnitude. Since the problem of plastic pollution is so big we thought some simple visual graphics would add some punch to our powerpoint.

When artist/illustrator Michael Bartolos asked if he could trade the use of the windows and studio space at Electric Works for his design services we jumped at the chance to use his skills as a graphic artist to create some informative visuals to represent the statistics about what is happening in the oceans.

We had our first opportunity to try them out at the Georgia Art Educators Association Conference. 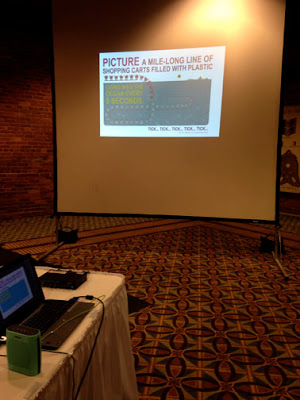 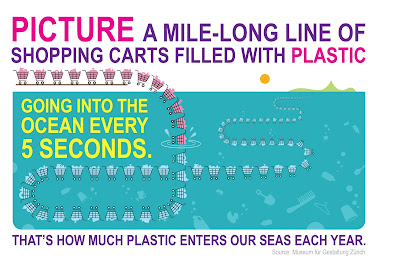 This shopping cart graphic really got the message across when the slide came up and we counted out, lingering for pauses: "One...two...three...four...five...

Thanks to Michael for great ideas made visible. 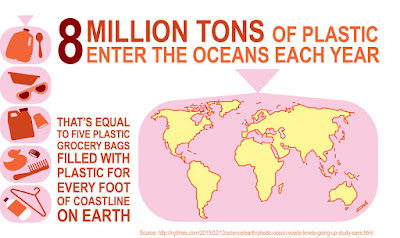 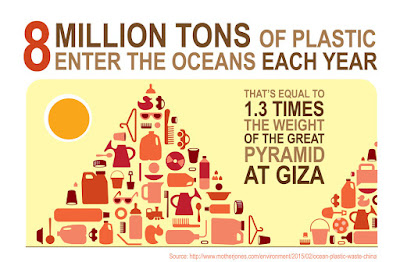 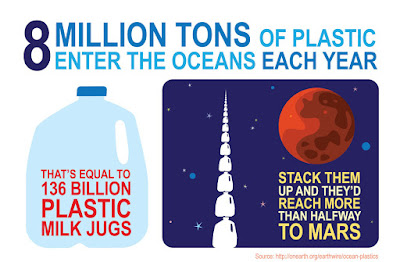 Posted by Beach Plastic at 8:05 AM No comments: