When we read the theme description from the Brower Center's call for artworks:
“The best idea we ever had,” we said oh yes! Wallace Stegner wrote of the national parks.  “Absolutely American, absolutely democratic, they reflect us at our best rather than our worst”; we knew we had to submit a proposal.

The Brower prospectus goes on:
"Next year is the centennial of the Organic Act of 1916, which established the National Park Service.  The purpose of the agency, this law says, is “to conserve the scenery and the natural and historic objects and the wild life therein and to provide for the enjoyment of the same in such manner and by such means as will leave them unimpaired for the enjoyment of future generations.”
Art was crucial to creation of the National Park System.  The oils of Albert Bierstadt, Thomas Hill, Thomas Moran, and other painters of Yosemite moved President Lincoln, in 1864, to protect that most beautiful of valleys as a park.  Paintings and photographs of Yellowstone had the same effect in 1872.  The success of David Brower and Ansel Adams in getting a copy of Adams’s portfolio of photographs, Sierra Nevada: the John Muir Trail, into the hands of Franklin Roosevelt tipped the balance in creation of Kings Canyon National Park."

Kennedy got the ball rolling on the National Seashore idea wanting to preserve his little slice of heaven on Cape Cod. Congressman Clem Miller from Marin County had the same agenda for his slice of heaven on the West Coast, and really captured congressional attention when he handed out David Brower's picture book Island in Time to every member of Congress. In the early 60's it was becoming obvious that the placement Earth's continents are not etched in stone, as it were. Rocks were constantly on the march. Point Reyes Peninsula was indeed an Island in Time.

At Kehoe Beach in the Point Reyes National Seashore we feel transported out of our everyday. It’s as if we had taken a trip to somewhere far away, yet we are only 7 miles from our home. Since 1999 we have collected ocean-born plastic from 1000 yards of this beach. We have tons of it used to create artworks as a fine-grain metric demonstrating the extent of planetary plastic pollution.

Kehoe Beach wasn't always here. It arrived on a tectonic conveyor—some rocks matching the granite rocks of the Tehachapi Mts. 300 miles south. Some from the Monterey Formation.

Hundreds of visits to Kehoe inspired us to create this image as an enlarged "postcard" enticing visitors to our favorite National Park. Many thanks to expert font-meister Noah Lang for his help with the design and layout of the text. 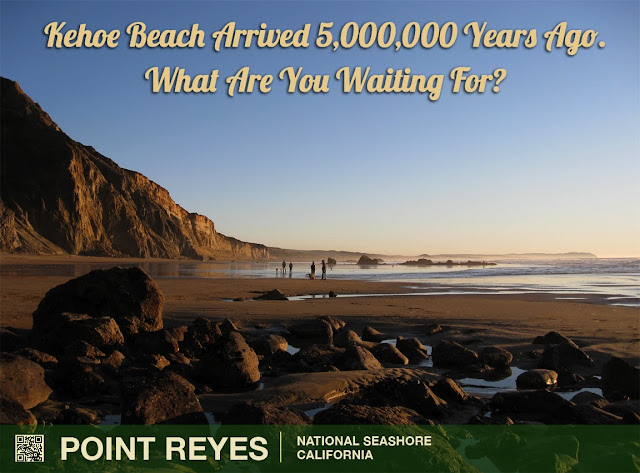 The QR code links to an animation demonstrating how the cliffs at Kehoe arrived. This gives a nod to the NPS interpretive agenda. Used with permission from Tanya Atwater, director of The Educational Multimedia Visualization Center UCSB. Your very own QR code reader is waiting for you from your phone's app store—it's free—it's fun, you can even scan the tag on your avocado. Urrgghh!!! But, that is another story about those pesky plastic tags on our vegetables. Teach your device to read... 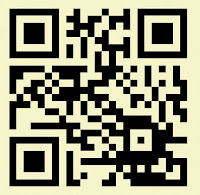 For more about the efforts of David Brower and his cohorts watch this trailer for "Rebels with a Cause" then watch the movie.


Rebels With A Cause - Trailer from Kelly+Yamamoto Productions on Vimeo.
Posted by Beach Plastic at 8:24 AM 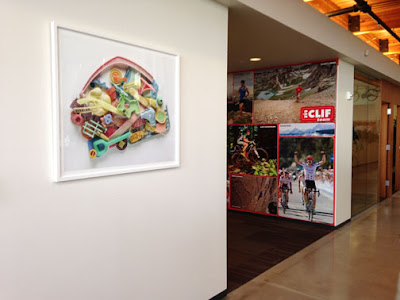 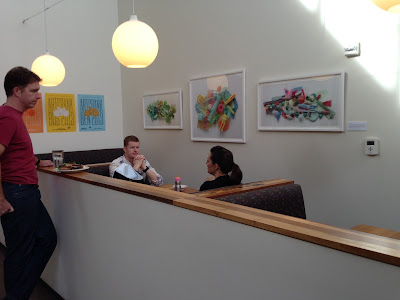 We are always willing to talk about our work and our creative process, so we were pleased to have the opportunity to give a lunchtime presentation at Clif Bar. And the reward is to see our work perfectly placed in the cafe and in the busy office passby in their corporate headquarters in Emeryville. We were thrilled to learn more about the Clif Bar commitment to conservation and the environment that goes beyond the workplace and enhances the homelife of their employees. Their corporate model for involvement is robust and full of hope.
Posted by Beach Plastic at 2:46 PM

Posted by Beach Plastic at 6:42 AM