Well, Queen Alexandra and Murray may have closed in Egypt but nurdles and microplastics from Kehoe Beach are in Cairo, Egypt this month at Darb 1718 Contemporary Art and Culture Center as part of Out to Sea? a traveling exhibit organized by the Museum für Gestaltung Zürich. Click here for the Facebook page dedicated to the show in Egypt. 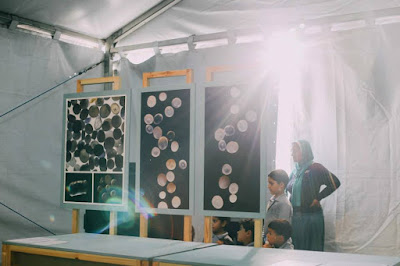 The international tour of "Out to Sea? The Plastic Garbage Project" goes on and on!

The exhibition was just at the Universalmuseum Joanneum: Naturkundemuseum Graz, Austria (green dot) and opened on June 26 at Utzon Center in Aalborg, Denmark (yellow dot). 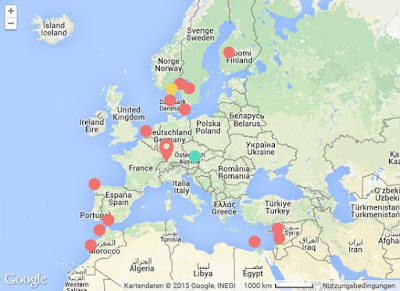 Posted by Beach Plastic at 7:55 AM No comments: 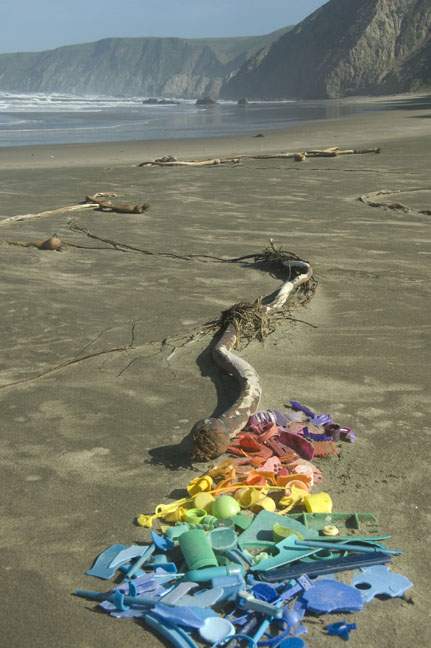 Sending rainbow greetings from Kehoe Beach —
celebrating the happiness of marriage.
YAY!!!
Posted by Beach Plastic at 11:00 AM No comments:

To celebrate World Oceans Day we took the grandkids to the aquarium at the California Academy of Sciences. What better way to experience why the health of the oceans is so incredibly important and what more clearly demonstrates health than speciation? And in the human realm the speciation of personality is demonstrated in our family's burgeoning speciation of psyche. There is nothing more fun than to see this underwater extravaganza through their eyes. 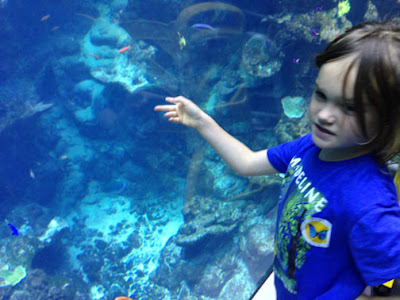 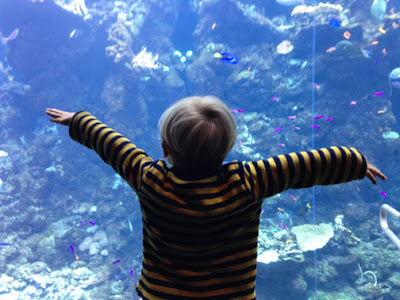 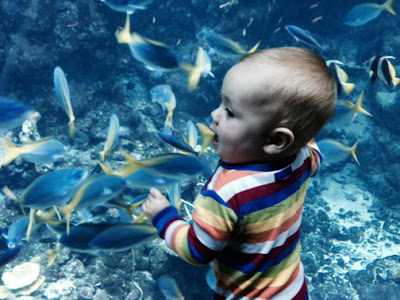 Good news about efforts, as Sylvia Earle says,"to give the ocean a break." The expansion of Cordell Bank and the Gulf of the Farallones National Marine Sanctuaries is a move in the right direction. These sanctuaries are the source of one of the richest areas of nutrient upwelling on the planet and provide fishing free zones that will help protect marine and coastal habitats.

Kudos to Doug Woodring for hosting Plasticity 2015 in Cascais, Portugal — putting plastic front and center in the conversation about resource management. Although we could not be there in person, we had told Doug we would, as the saying goes, be there in spirit and thanks to Livestream we were able to tune in, in real time, and now everyone can watch it here.

Posted by Beach Plastic at 9:07 AM No comments: 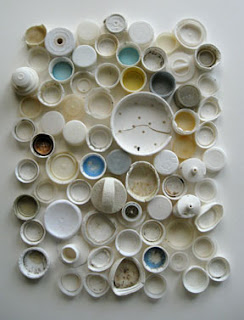 Bottled water rose to popularity in the 1970s and is now the second most popular drink after sweetened soft drinks. It's a strange sight to see cartloads of bottled water being wheeled out of "big box" stores.

Water is heavy, accounting for a large portion of the cost, as it is transported in bottles across the planet.  Fiji Water, actually from Fiji, is shipped thousands of miles to market. The folks who who gave us Fiji Water, also marketed POM pomegranate juice as a cure-all and gave us the cute pistachio TV ads. Those same folks own 52% of the Kern County water bank.

In these drought times, we are ever more aware of water use and we are now becoming cognizant of agriculture's usage at 80% of California's water. Are water wars just around the corner?

Marketing rules the waves of our economy as we see from the products of Roll Global who manages the pistachio and pomegranate farms generating billions in revenue. What if the sensible use of our planetary resources was aggressively marketed ?

Finding meaning the mess of a bunch of simple white bottle caps. In 2010 we were the "poster children" for Coastal Clean Up Day. Our caps lookin' good in this ad campaign. 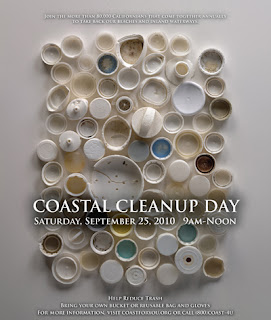 Posted by Beach Plastic at 6:22 AM No comments:

When Tracy Tindle '82 asked me to participate in Pitzer College's Alumni Weekend I had no idea that it would spin into a really BIG deal with an opportunity to develop my public speaking skills under the tutelage of an expert speech trainer.  She invited me to give a TED-like talk for the Ideas Fair at the Pitzer Institute for Entrepreneurship (PIE). Masterminded by Melinda Henning '68. PIE intends to help students develop leadership skills ( including public speaking) that will help them put their ideas into action.

Through the years Richard and I have given numerous power point presentations and have developed quite a lively song and dance routine — somewhere between Harold Pinter meets David Mamet and Punch and Judy. Guess who is Punch?  Way too shy, a nervous nelly, I never took drama classes or did theater in school — almost fainted from fear during my piano recital in 5th grade.

Melinda's office at Power Speaking in Redwood City sits across the street from the Oracle headquarters. The gleam from that towering presence, an epicenter of Silicon Valley, let me know that I was not in Kansas any more. 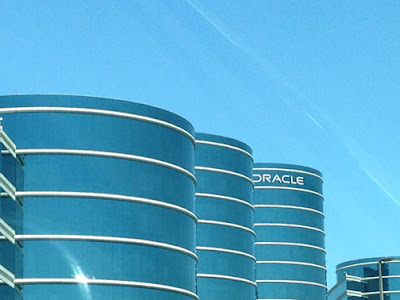 As a speech coach, Melinda has had an illustrious career helping people (as her byline says) go from competent to charismatic. And her big smile and genuine interest in helping get the word out about plastic, put me at ease.

With my head reeling with way too many stories and way too many important points she helped map a cohesive framework for my talk. Her understanding of how much the audience can grasp and the timing of their receptivity, along with her suggestions about voice and cadence guided me through our practice sessions. 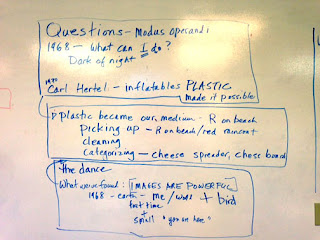 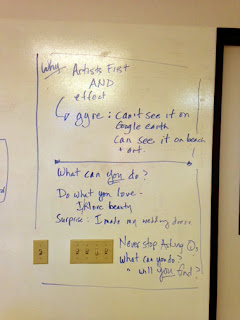 When I hit the stage, yes, I was quaking in my boots, but I stepped it up and fooled myself into giving a stellar performance. With Melinda in the audience cheering me on, I realized that I really could do this and the audience they too gave it up with applause. Not exactly easy as PIE but I am sure game for another slice. 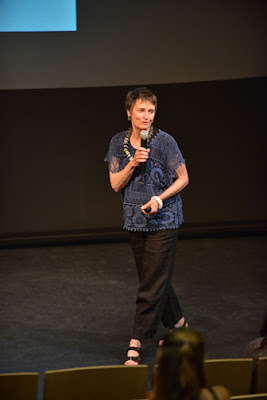 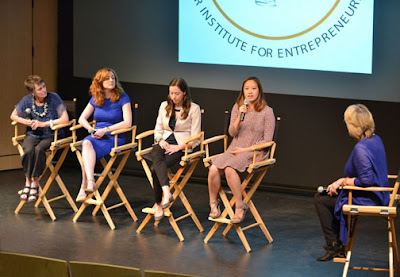 On stage after the individual presentations, Melinda moderated a panel with students and audience participation in a discussion with the other presenters: Susy Sobel '12  juvenile justice; Feby Boediarto '17 Nepal; and  Allison Donine '16 gender and natural disaster response.

After fretting with anticipation, preparing for and presenting my speech, I was ready for some fun. In addition to the serious topical discussions at the Ideas Fair, the weekend was a blast of get-togethers and cocktail receptions - a networking fest - with old and new best friends. 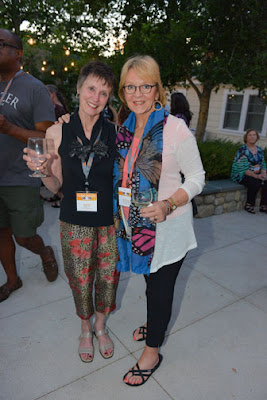 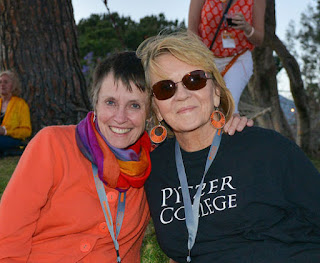 On Saturday evening there was a finale concert and roast of the outgoing Pitzer President Laura Skandera Trombley. Sorry that I did not stay to enjoy the music and the moon but by then I was really tuckered out and I knew I still had more big days ahead. Early Sunday, I drove to San Diego to visit my sister Janis Jones and of course, first thing, we headed to the beach. Something about the family that prays together. We collected bags full of plastic. Back at home we washed the plastic in preparation for my workshop Monday in Karol Gans' third grade classroom at Del Rio Elementary School in Oceanside where my sister is the school based resource teacher.

When All the Way to the Ocean was published in 2006, Joel Harper '95, and I corresponded via email. I had long been a fan, so it was a special thrill to meet up with him at Pitzer at the Ideas Fair. He gave me his new picture book Sea Change about a girl who collects plastic from the beach then makes artwork out of it. Sound familiar???

To introduce the students to our beach plastic project, I showed our film One Beach Plastic and I read aloud Sea Change.  Inspired by these stories, the kids got seriously to work. It was remarkable to see this energetic, and I hear-tell often rowdy group, focus their attention on making artistic arrangements. Everyone's creation was photographed and Janis posted them on Joel's website. The students were thrilled to know that their artwork would live on and would be viewed by a world- wide audience. And Joel is thrilled to learn about how well the message of his book was received and then put to use. 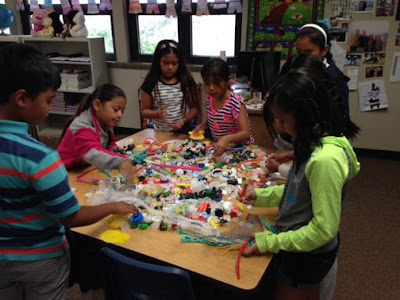 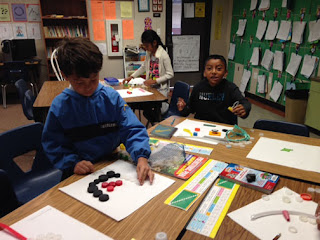 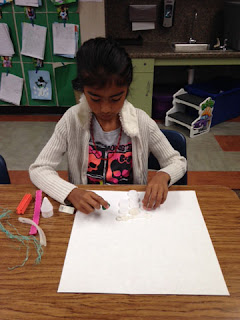 It was really a full circle weekend. From sparking up ideas at the Ideas Fair and then putting the ideas into action at Del Rio. And along the way, I met some wonderful people, made some new friends and got to spend time with my family. 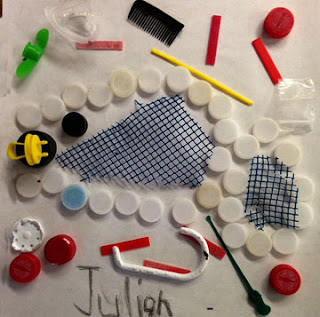 Posted by Beach Plastic at 4:48 PM