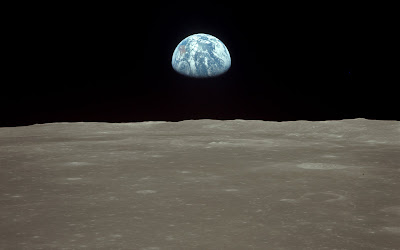 The first Earth Day, April 22,1970 was organized by Senator Gaylord Nelson as a response to the horrible Santa Barbara oil well blow-out of January of 1969. Just one month before the spill, the most powerful image of the 20th Century, Earthrise over the moon horizon, was shot by astronaut Bill Anders from the Apollo 8 spacecraft. It was the first journey humans had made out of Earth’s orbit. Anders' Earthrise preceded the images of oil-soaked birds filling our psyches. Surfers emerging from the waves black from crude oil were cover stories all over the US. 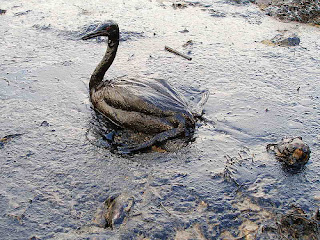 The image of the blue marble in the black void was an unavoidable reminder of our commonality as citizens of planet Earth. In those days, the environment was not a political football tossed around casually as it is today—the decade of the 70's became a Golden Age of environmentalism — DDT was banned, the EPA was created, the Clean Water and Clean Air Acts were signed into law, the Superfund law—even Nixon gave speeches urging environmental legislation. In 1980 Reagan reversed the trend, cornering and Balkanizing environmentalism into becoming just another "special interest."

Just this April 7, 2011 The House, passed an anti-EPA bit of legislation forbidding regulation on greenhouse gasses. How hard is it to realize—no air, no water, no life? Anti-environmentalists argue that dire predictions made that first Earth Day never came true. Funny, but it was the legislation passed that brought that about.

So, here we are again headed out for Kehoe, feeling that maybe taking one miniscule bit of the planet, where the ocean meets the land, we can tell the story of what is happening planet-wide and maybe telling it with some good humor, some heart felt grief, and just the weird geeky-ness of having done this for 12 years now. Can this be a way to open the mind to action? Today we are not alone doing this. 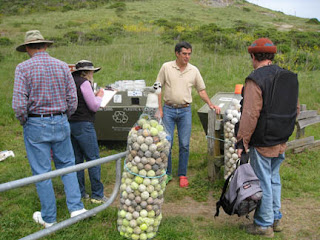 The Environmental Action Committee of Marin and the Park Service scheduled a cleanup at Kehoe. It was a great success, our plastic buddy Richard James was handing out bags and advice at the trail head. People were readily going at the task and we met a bunch of folks to share the labor. There must be a gene for the "search and find" fervor. It's both the unexpected and then finding just the thing you've been looking for that floats our boat, and our little tribe of cohorts.  By weight today, it was rope and line, hawsers and net. Getting that stuff that out of the waste stream feels most virtuous—a tangle-trap for birds, turtles and marine mammals. 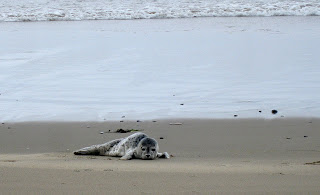 Speaking of mammals, far down the beach was a harbor seal pup, very newly arrived, with fold-y skin and grey fluff all over. It'd remind you of a Shar Pei pup. It's in the tide line scootching up to keep out of the rising tide waiting for its mother. As this is the only beach on this side of the point that allows dogs, seems like everyone has a dog. Richard J. has been warning the dog people, as they headed out, to keep their pooches on a lead so's not to be harassing the poor thing. He told us, he had made a leash out of retrieved line for a dog on the loose.

And the Peregrines are seriously nesting up on a nook of the sheer yellow ochre Laird sandstone formation. We'd been seeing them play at it for last few weeks, but now they are paired up and ready for what they came here for—to make more Peregrines. There is a ledge and behind is a dark niche where the baby’s will be raised. The perch is a perfect look-out, where the female is perusing the whole scene—the ravens, the Redtails & we the plastic gleaners. The banning of DDT in 1972 allowed Peregrines, and most of the top of the food chain birds (eagles, condors and some owls) to return from the brink of extinction. Jeeze, they way they fly, veering up the cliff face, swooping, wings tucked in, then coming to a dead stop at the nest, it's better than Cirque du Soleil. We get a good look with the binos— We'd make that heroic confident bird the national symbol. Thank God our legislators had some sense to ban DDT.

It was a grey day, a bit heavy feeling with rain just at the horizon line, the wind out of the southwest—the rain wind. As typical this year, from several trips, the plastic has been intermittent. Today, we found all the usual things, oyster tubes, combs, tiparillo tips shotgun wads, lighters. Sadly, no soldiers. Dropping the focus to the smaller bits we got reminded about the color and patina that attracted us in the first place.  We gathered a lot of tiny pieces. And, as the focus narrows nurdles come into the spotlight, pernicious little devils, packed with absorbed toxins. In 2009 we had gathered packets of 100 to send off to Japan for analysis by Shige Takada. The report came back that they were loaded with DDT. 40 years later DDT is still floating around in the ocean. Good thing Peregrines don't eat fish. Hey, we eat fish, fish eat nurdles, Who's endangered now?

Earth Day 2011. As we toil up the trail with a weighty load—we didn't just scout for stuff we like—today we picked up everything. 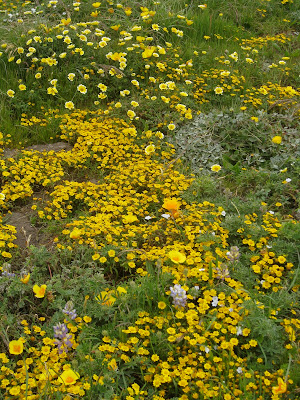 The Song Sparrows were chorusing in the Tule Marsh. The cliffs were ablaze with yellow­—­Cowslips, fragrant Lupin, Buttercups, Monkey Flowers and of course, California Poppies, the coastal variety. How many hues of yellow can there be? and our very favorite the lovely Tidy Tips.
Posted by Beach Plastic at 3:33 PM No comments: