Bend is high desert and it's high style. Billed as the gateway to the great outdoors where winter sports abound and in the summer the Deschutes River is a fly fishing paradise. Bend is the home of Scale House the convener of Bend Design  a creative tank for thinkers both right and wrong. We were pleased to bring our song and dance, our Punch and Judy show where our Bricolage: Design For Life  mixed it up with a hearty bunch of visionaries and doers. It was our tribe gathered together for three action-packed days of talks, workshops, hands-on and kicking' it. 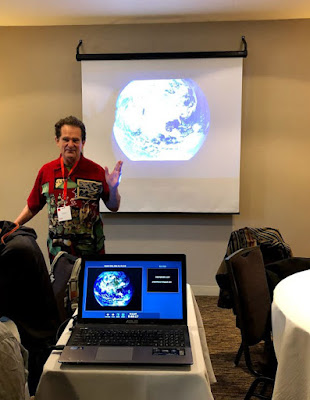 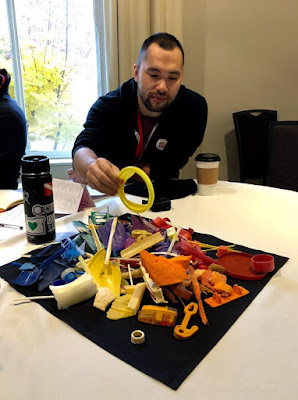 This creative process thing is amazing. We don't really do anything special — just pile on the plastic then ready, set and away they go. Works every time. Whether it's the field trips of 4-year-olds from the local pre-school, eighty-year-olds from Judith's classes of seniors, everyone is attracted to what we provide. Maybe it's the unified patina the stuff acquired in a long life at sea? It certainly got us going beginning in 1995. Folks do dive in with a minimum of encouragement. Everyone loves the feel of the material. At once so familiar and yet, since the pieces are disconnected from their use, they are strangely unfamiliar. We encourage participants to make arrangements of the colors and forms, free from their function and to be without judgement — to make something, sweep it away, make another something, sweep it away, then make another something.

Caravaggio's dramatic light is one of our prime influences. The cellphone flashlight illuminated these masterpieces by Tracy Tindle:

If you want to see the Caravaggio light in acton, here a theater company is enacting a series of Tableaux Vivants:

Over the years, it's been our lucky, good luck to have gotten to know some of the most remarkable people on the planet. In Bend, we made many new friends plus were surprised to see and hear about several old friends.

Tucker Nichols ingenious work with Sodastream was presented by John Bielenberg in his talk When Wrong is Right. As just one of many examples John's Project M Think Wrong took the phrase I LIKE PIE to extremes that resulted in the creation of a PieLab in a dilapidated storefront and the rejuvenation of rural town in Alabama. Electric Works studio photographed the illustrations for Tucker's latest book with Dave Eggers This Bridge Will Not Be Gray.

San Francisco designer Martin Venesky was featured in the screening of Beautiful then gone. He is a raconteur par excellence who covets every font and typestyle and has filled his home and office with common and precious items that he enlivens with tales of their origin and their placement. Talk about covet!!! read our blogpost about when we took Martin and his partner Steven to the beach.

Beautiful Then Gone from Mike Slane on Vimeo.

Allison Arieff, whose column about design and architecture graces the opinion page of the New York Times, posed the timely question: with all of the problems in the world, do we really need an app that lets us brew our coffee from anywhere?— As a friend of a friend, in way less than 6 degrees of separation, her best friend is our neighbor Molly Giles.

Miwa Matreyek, MFA, 2007, Experimental Animation and Integrated Media, California Institute of the Arts has forged a new genre of performance video, live dancing with her own made animations. Although Judith attended Cal Arts back in the olden days of 1970, they share appreciation for the encouragement and the influences that helped to shape their lives as artists.

This World Made Itself reel from Miwa Matreyek on Vimeo.

Thanks to Tracy Tindle, Pitzer '82, and her husband Paul we were hosted royally and who introduced us to fine dining Bend style — a world-class James Beard Award winning restaurant: 5Fusion.
Sushi in Bend? Really!

We give a big "High Five" to René Mitchell and Martha Murray who made us feel so welcome in Bend and added a new layer to the meaning of high desert style. 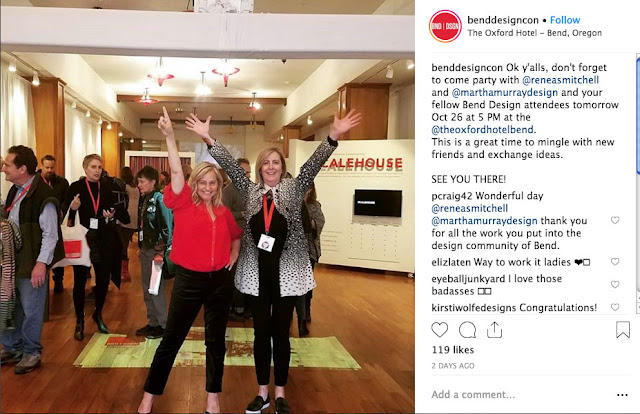 Posted by Beach Plastic at 9:57 AM No comments: