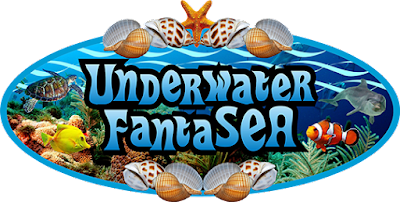 Visions of underwater fantasy might not be the first thing you think of when you think Arizona and it might have been awhile since you have been to Mesa, so now until May 29 is the time to get to the i.d.e.a. Museum.

Underwater FantaSEA is an extravaganza of fun and facts about the importance of the ocean for the health of the planet. Along with serious statistics about how long plastic lasts in the ocean, mermaid's reading stories and swashbucklers telling tales, there have been demonstrations about how to gear up for a deep sea dive and our beach plastic prints and video have graced the exhibition hall. 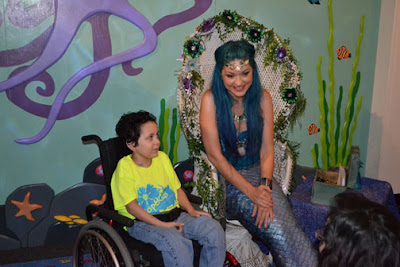 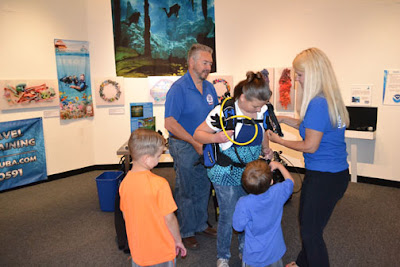 i.d.e.a. may be a long way from the coast but their team of designers and curators collaborated with scientists and marine researchers to mount a timely exhibit for kids of all ages that they hope will inspire future ocean stewards through innovative educational programs and hands-on activities.

Already there have been some 23,0330 visitors, what are you waiting for?

Friday, April 22 is not exactly the "Harmonic Convergence" but it is day when planetary forces align and we will be celebrating both Earth Day 47 and Passover 5776.

On August 24, 1987 Judith had just completed hiking the Inca Trail arriving at Machu Picchu the morning of the Harmonic Convergence.

She writes:
We had not hiked there in hopes of joining with the HC believers. On the contrary, the night before we had camped at the Sun Gate (Inti Punku) so that we could descend into the sanctuary arriving at the sacred sun stone before the tourist buses arrived. Expecting a crowd of other intrepid hikers congregating to witness the great shift in the earths' energy, helping to facilitate the coming new age of world peace, to our amazement at sunrise there was nobody there. Nobody! So we celebrated our good fortune, rambling the grounds without hordes of eager tourists with cameras shutters clicking or the humming, chanting, drone of dancing and hugging convergers. The earth didn't make a monumental shift that day, but I certainly did. It might have been the altitude or maybe it was just the thrill (and exhaustion) at having arrived after the arduous terrain of the trail, either way I felt harmonically realigned, resonantly attuned. 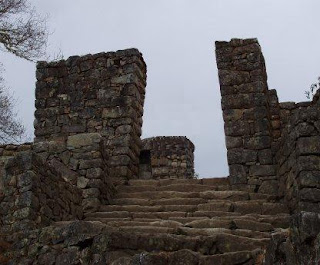 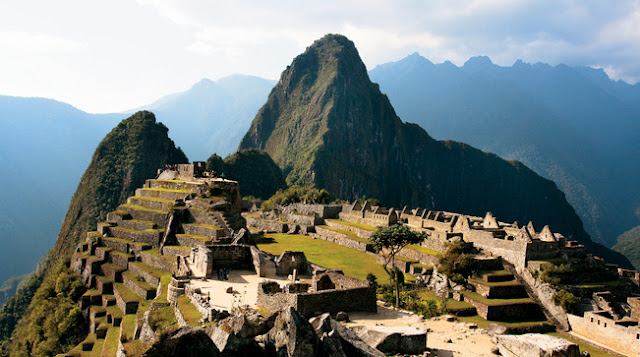 On August 24, 1987 Richard was at the bottom of the Grand Canyon standing under a rock-warmed waterfall near Tapeats Creek having a nice wash-up after days of travel down river.

He writes:
It was a spur of the moment thing, this river trip. A friend had called the evening before saying he had a spot on his little boat if I wanted to come along. A private trip in 12 foot boats. Not the big 40 foot baloney boats as we came to disdainfully call them. Humans are so hierarchical given half the chance. What y'all should know is that I had successfully traversed a lot of 60's style new age-y territory developing a wicked backhand with the skeptic sword, able to slice through any hocus pocus-y clap-trap. Working as a studio artist provided a more than ample touch with the mystic. As I was out buying supplies for my raft trip down the canyon, I had to jostle my way through a crowd thronged with finger cymbal, incense wafting, dreamy-eyed purple clad (mostly) new agers lining up to shop at the new age book store, Paper Ships. "What's going on?" I ask. The woman in diaphanous white says, "It's the Harmonic Convergence. Those who are leaders of the new age will be led as if by magic to power spots around the planet." "What's a power spot?" I ask. "OooH, my," speaking as if to a two year old—impossibly  dense—"Places like Mt Shasta, Haleakala, Machu Picchu, Mt Fuji, the bottom of the Grand Canyon. "Wow," I exclaim, "I'll have to stop calling it the Moronic Divergence. I'm in, baby."

These days, instead of waiting for another Harmonic Convergence, we have been congregating with friends to usher in our own new era. We bring here to the fore the important accomplishments of our beloved colleagues:

Friday is the last day to see the exhibit Out of Place: Creativity meets Detritus of Land + Sea featuring the work of Janis Selby Jones at the China Brotsky Gallery at the Tides Thoreau Center in San Francisco.  Her stunning photographs juxtaposing plastic debris against the horizon line of the Pacific Ocean and her playful re-imaginings of refuse into objects of interest and beauty are not to be missed. 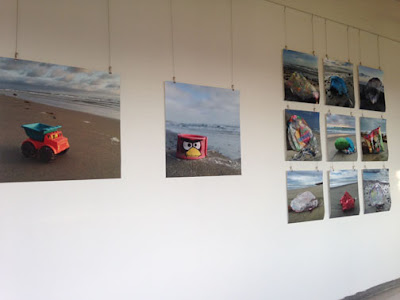 Bicyclist extraordinare Sarah Bellum completed her inspiring fifty day, 1,192 mile, zero-waste bicycle journey from San Luis Obispo to Portland where she has arrived and is now establishing a home in a beautiful spot where she will create the next chapter of her adventure story. 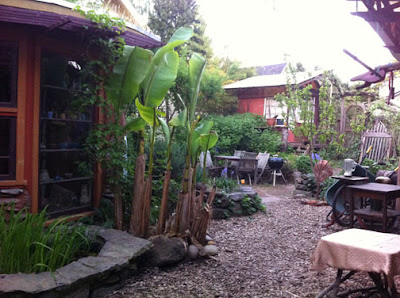 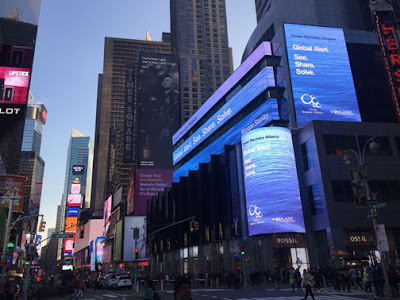 Andrew Mellen, professional organizer, offers more than just a way to get organized, he offers a philosophy of life with the byline: more love, less stuff.  He has helped us to get rid of clutter giving us space for more plants and more time in the garden. 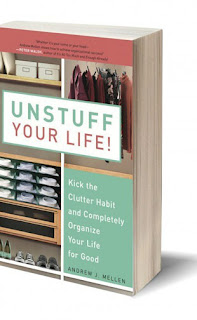 For Passover we will be drinking wine and eating bitter herbs (and Richard's Grandma Ida's famous recipe for chopped liver) with our neighbors who share our love of gardening; who have sparked Richard to propose recording our conversations creating an over the fence school of manure digging and practical wisdom.

Richard writes:
It wasn't even dawning, it was the midnight before the dawning of the age of Aquarius. In college, regular classroom school, not studio art,  I took a class in comparative religion. Huston Smith was visiting professor. Cool that he had written the text book: World's Great Religions. Course syllabus included The Sacred and the Profane—Marcia Eliade—how we create the "Dancing Ground"—the place where we express our relationship to a spiritual sense of the world. There was the, just released, Purity and Danger,  by Mary Douglas; what is allowed in the temple and what is kept out. The nature of pollution in the largest sense. It became a primer for the nascent eco movement. As explications of Buddhist, Hindu, Jewish practices unfolded, it was the Jains who really got to me, the sweepers walking in front of practitioners lest they step on an ant. Fallen fruit was the only allowed food. A strong kind of devotion. But finally it was the balance of the Tao—that everything is contained in everything else, relaxed and easy, that made me convert (as if you could convert to something like the Tao—(as a religion, it's the original "Is you is? or is you ain't? —religion— And even if you ain't, you is.").

Posted by Beach Plastic at 4:22 PM

is a mouthful of a title but when it is announced by Michael Krasney on KQED's Forum, the most popular morning news and public affairs program, everybody is listening.

The program featured William Fox, director of the Center for Art + Environment, the Nevada Museum of Art; Jane Kim, artist, science illustrator and founder of Ink Dwell; Camille Seaman, artist; her photography is featured in "Vanishing Ice" at the David Bower Center in Berkeley; and moi, Judith Selby Lang, artist, One Beach Plastic.

It was an honor to be on the program with such an esteemed group of artists. The conversation was lively and fast paced and about my favorite subject — art and activism.  It was a real challenge to tell our story in just my allotted five minutes. Yes, just as I was getting warmed up, it went by in a jiff.

For your listening pleasure, they have already archived:
Posted by Beach Plastic at 8:01 AM