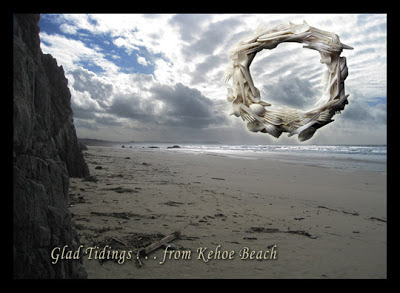 We are sure glad about what transpired this year. We are grateful to the many enthusiastic supporters who helped us spread the word - our beach plastic project has educated and entertained from Kehoe Beach to Zürich, from Monterey to Tbilisi.

Special thanks to the special people who helped our story go far and wide.

We started 2012 with Masterpiece Made of Trash for the Travel Channel series Bizarre Collections.

Mike Leonard from CBS produced Oceans and Art that premiered on the Today show- yes, that TODAY show first-thing-in-the-morning If you missed it live it is now available on Vimeo.

Via SKYPE we were live on prime time Tokyo WOWOW TV. No, we have not yet found any tsunami plastic but we do find plastic from Japan all of the time.

The Plastic in Question graced the 1st, 4th and 5th floors of the San Francisco Public Library-Main Branch. The library staff was a dream of a team to help us refigure our blog into reader friendly text panels that were perfect for the library going public.

We were Washed Ashore, the cover story in the summer issue of National Parks magazine.

One Plastic Beach is the little movie that could. To date it has had quite an Internet presence with 143,100 hits on Vimeo. All year it’s been on the road, traveling throughout the US with Mountainfilm in Telluride and the Wild and Scenic Film Festival.

And thanks to Teknion we have been on the road too. We presented Indra’s Net our power point to workshop participants at the Dallas Museum of Art and the Newseum in Washington D.C.

Our Kehoe Beach nurdles or "Mermaid's Tears," as they are more poetically named, are included in Out to Sea? that opened at the Museum für Gestaltung Zürich (Museum of Design Zurich) and has now moved on to Museum für Kunst und Gewerbe Hamburg until March 31, 2013

"The Ghost Below" opened December 1 at The Marine Mammal Center. Our looming nine-foot "monster" made from ghost nets and derelict fishing gear from the stomach of a beached sperm whale is the first in a series of exhibitions and events to highlight the problem of marine mammal entanglement.

June 1, mark your calendar
The Oakland Museum has been under construction for a long time – when the natural science area is completed it will be the first time in five years that all areas of the museum will be open. Plan to visit the art, the history AND the nature on June 1, 2013. You can see our installation The Great Conveyor in the Cordell Bank area.

March 22, mark your calendar
We have of late turned our attention to a somber bit of plastic jetsam. Through the years we have amassed quite a collection of toy soldiers. When we look into their tiny faces we are amazed by their expressions. Wracked by a long life at sea, some of the faces are gnarled, chewed on, abraded by the sand. Each is a poignant reminder of the ravages of war. March 22 – April 28 we will present The True Cost of Plastic at Gallery Route One in Point Reyes Station.

Seems like Kehoe Beach is not going to be plastic-free anytime soon so until then we will be doing our best to do something about it. Our most important effort is stemming the tide. Stopping the plastic before it even gets to the beach. Re-thinking everything, every piece of plastic we use and asking ourselves- do we need this?

In preparation for the grand reopening of the natural sciences galleries at the Oakland Museum next June we presented our PowerPoint, Indra's Net to the docents and staff.

Indra in Hindu mythology lays an infinite net over the universe where at every juncture a jewel hangs reflecting all other jewels.

Kehoe Beach in the Point Reyes National Seashore is our jewel on the net. Since 1999 we have focused our efforts on a single point, on just 1000 yards of beach. We have cast Kehoe Beach as the stage for a drama that explores ideas of (dare we say it without irony in this postmodern world?) love and beauty. This pinpoint of land is an exemplar of the planetary problem of plastic pollution and the site of our ongoing investigation of geology, botany, biology, along with the history and development of polymers and plastic. One interest leading to another to another as a perfect example of how everything is connected to everything else.

The creative process is at the core of how we think and what we do. In our presentations we incorporate jokes and poetry and great visuals. For the art docents we spoke about our some 40 years of experience as studio artists and the aesthetic influences that shaped our Cordell Bank installation. For the history docents we told stories about some of the individual pieces of plastic we have found and how we discover their origins. For the natural science docents we talked about Kehoe Beach and its proximity to Cordell Bank.

The docents appreciated our talk/slideshow and afterwards we got to take a look at our plastic display. We had not seen the install completed. We are going to add a few more bottle islands to the ceiling making a better connection between the table-top display and the ceiling and have to add a few more stories to the booklets. But all and all we are THRILLED!!!

The Oakland Museum has been under construction for a long time – when the natural science area is completed It will be the first time in five years that all areas of the museum will be open. Plan to visit the art, the history AND the nature on June 1, 2013. 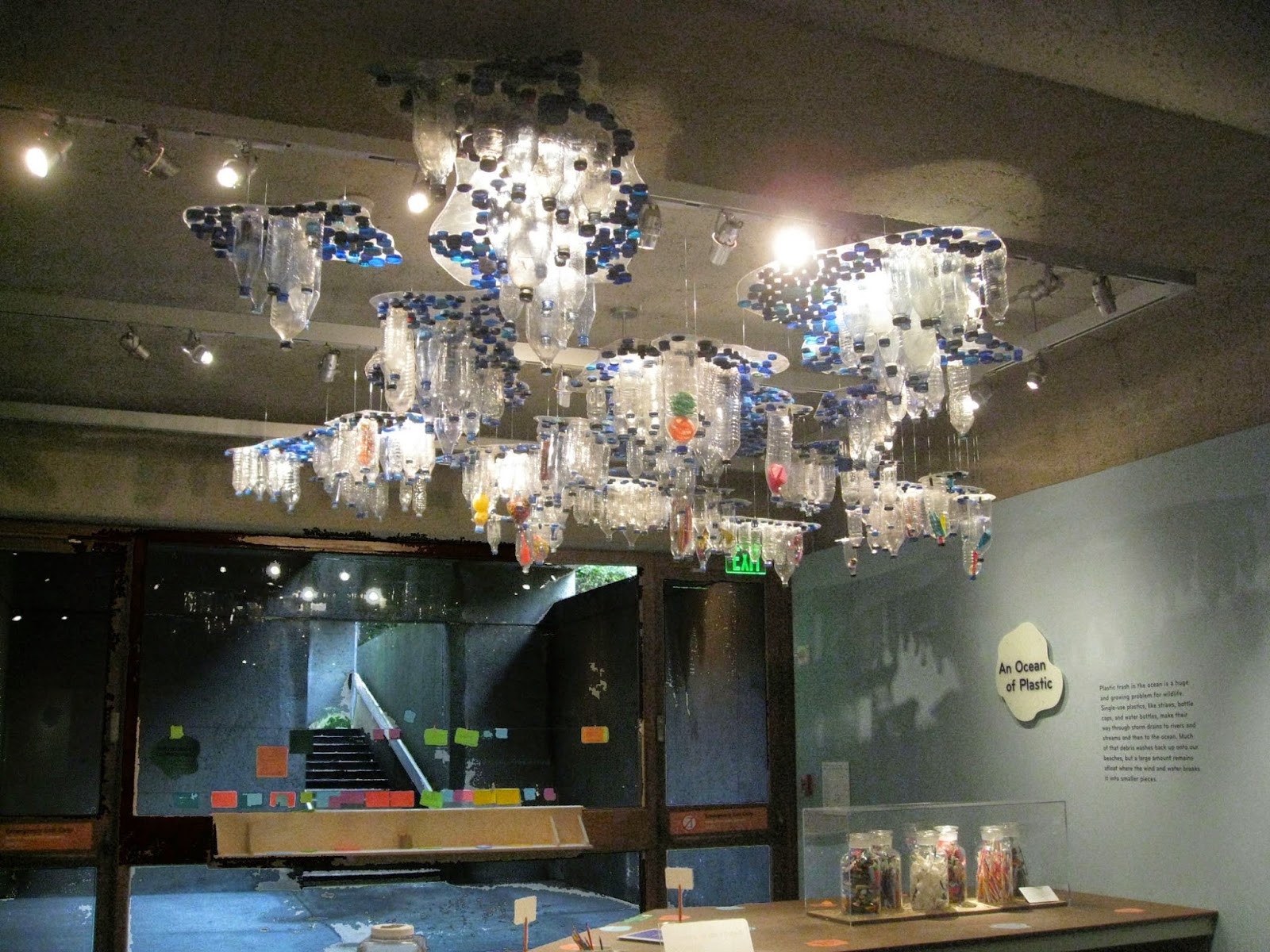 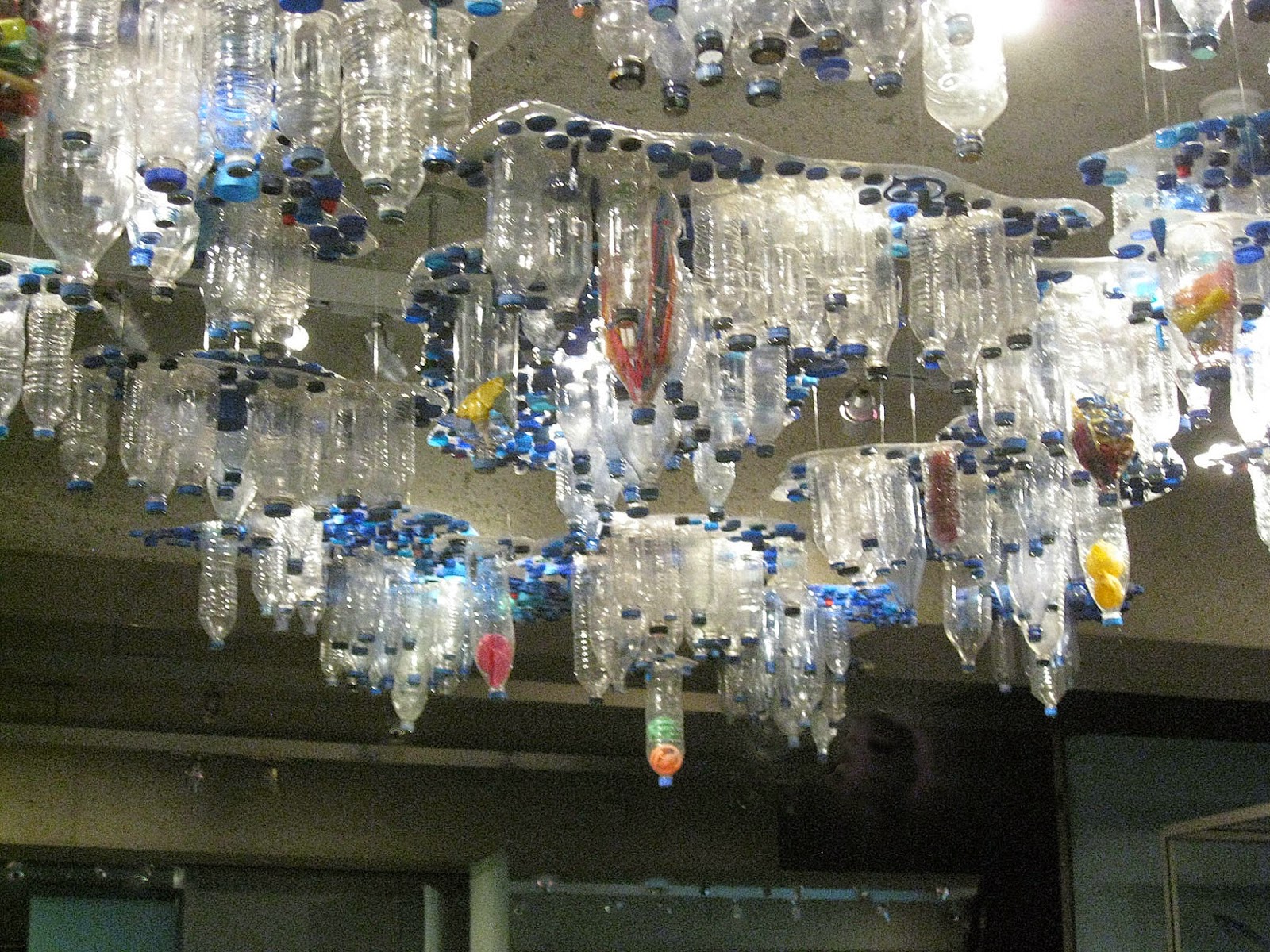 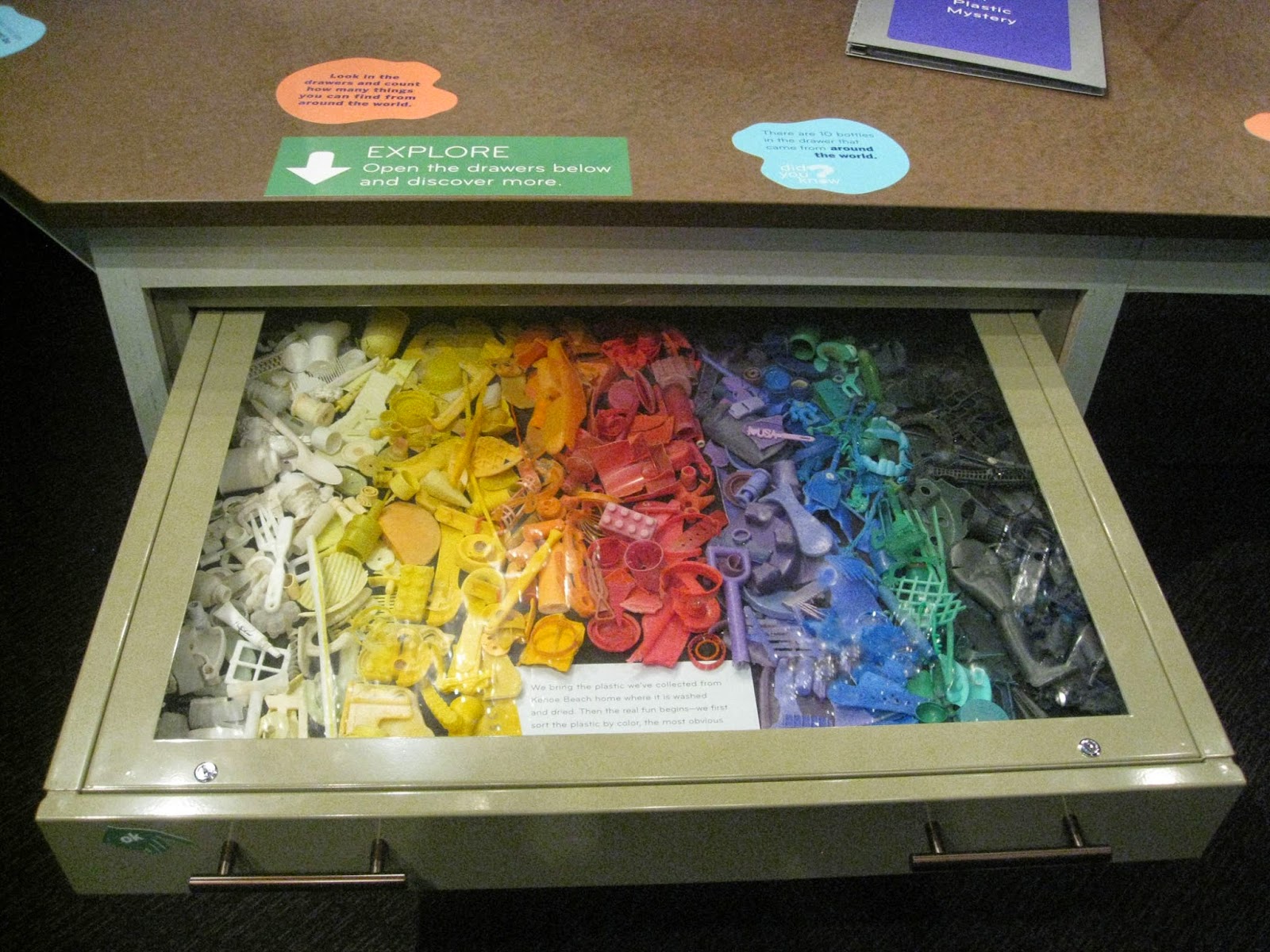 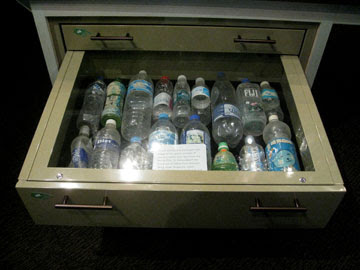 Posted by Beach Plastic at 2:10 PM No comments: 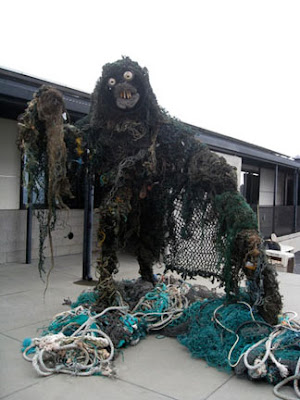 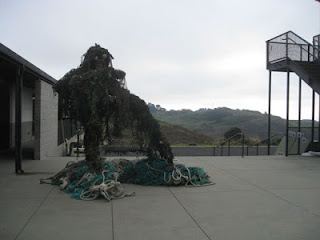 It was such an auspicious beginning — the ghost net monster animated by the wind whipping the nets was better than we could have imagined.Then watching visitors to The Marine Mammal Center do the attraction/repulsion dance as they were intrigued and then horrified — and yes, that undeniable smell of whale.

In our early years, after our grad school training in post-modern art theory it was the esoteric and difficult that seemed important. Since we began our beach plastic project we have turned the tide and have sought venues where art could have a wider impact. Our work has gone well outside the confines of the traditional gallery/museum, white-walls spaces. We've been heartened to see our work on the back of busses, at the US Embassy in Tbilisi, at the San Francisco Public Library, in the bathrooms of an upscale resort hotel. The world outside the accustomed is where we want to be. We love visiting the ivory towers of culture, but to see our work at the TMMC feels totally right, and we happy to be a part of the TMMC's mission to include art as part of the program.

Why art in a hospital? TMMC is a special place for healing, not only for the marine mammals who are patients but also for the visitors, volunteers, and staff.

We believe that if art that can hold the gaze of the viewer long enough to interrupt the mind-numbing drone heard daily regarding the dire state of the planet, it can have a positive healing and life-affirming effect.

Hey, we too are marine mammals and we are glad to have that special TMMC healing energy coming our way.

Thanks to Michael Hanrahan for his comprehensive report about “The Ghost Below” for the Mill Valley Patch. 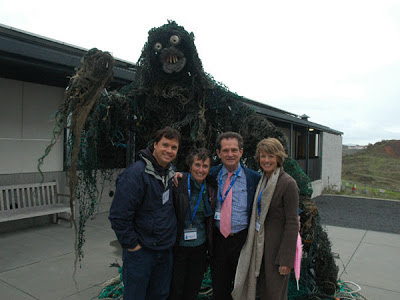 Posted by Beach Plastic at 7:10 AM No comments: