By snow or by sea

By snow or by sea, sending you warmest wishes
for a wonderful holiday season. 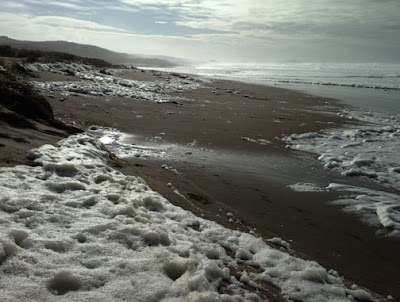 Hey baby, it's not that cold outside and even with the high surf advisory and high tides,
we were game for the elements. Forget Toys-R-Us, we are shopping for treasures at Kehoe Beach. Like drifts of snow, cloudy froths of sea foam blew like tumble weeds across the sand. Off-shore ocean turbulence whipping up organic matter and Bing and Doris are whipping it up here:

Posted by Beach Plastic at 6:22 AM

When we saw the word TIDE in the subject line we sensed that it might have something to do with our beach plastic project—an exhibit, a chance to talk about what we're up to. We had no idea that it was THE TIDE ® from Procter and Gamble. After signing an NDA (non- disclosure agreement) we found they wanted us to upcycle TIDE detergent bottles. This developed into a productive association with the creatives at Saatchi & Saatchi NY, P&G's ad agency. It's easy to wax polemical about the "tide" of plastic washing over the earth, pointing the finger of blame, but a few weeks before we were contacted by Saatchi we had decided that the only real solution to the plastic problem would come from industry, from the prime movers in the proliferation of plastic. So we dove in.

After four months of brainstorming, conference calls, and prototype deadlines we are released from our NDA and can announce the result of our efforts for Proctor & Gamble's TIDE® Keepsies ad campaign. Take a look at our bookends and our chandelier made from upcycled detergent bottles:

We are hopeful that our association with Saatchi and P&G will lead to more wide-ranging and impactful solutions. How about filling stations for re-usable detergent bottles at super markets and laundromats?

We love solving real-world problems with real-world solutions. We "play well with others"and enjoy collaborating with creatives of all types: scientists, engineers, designers, instigators and artists.

For more about our product and idea development services:
judith@sfelectricworks.com
Posted by Beach Plastic at 1:10 PM