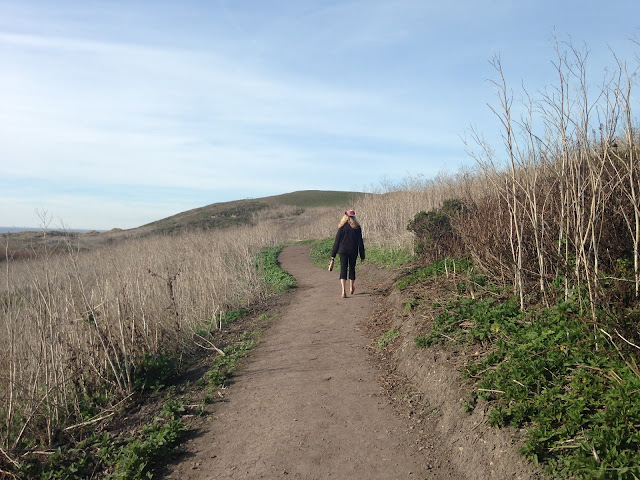 Christine Kristen (aka LadyBee) has, for years, been a powerful force on the Playa, Black Rock City in Nevada and today she cut a fine silhouette on the trail to Beach Kehoe. We have admired her work as Burning Man's art curator and are so happy that during this last year our friendship has grown. It was a special thrill to spend a day at the beach where the conversation rolled in like the waves.

Back in 2003 Richard met up with LadyBee when she and Larry Harvey came to Richard's Trillium Press in Brisbane about doing prints of David Best's Temple of Honor as a fund raiser for the Black Rock Arts Foundation (BRAF). Trillium had long been leveraging print projects to help pay for artworks, large and small. David Best officiated at our wedding in the Temple of Stars in 2004 (we like to say attended by 35,000 of our closest friends—the caterer never showed up but the band was awesome). 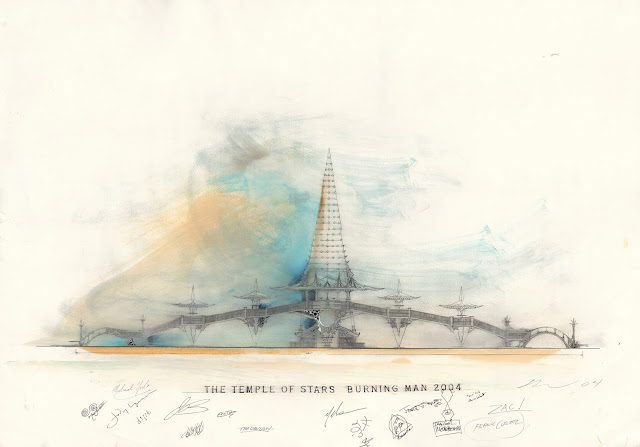 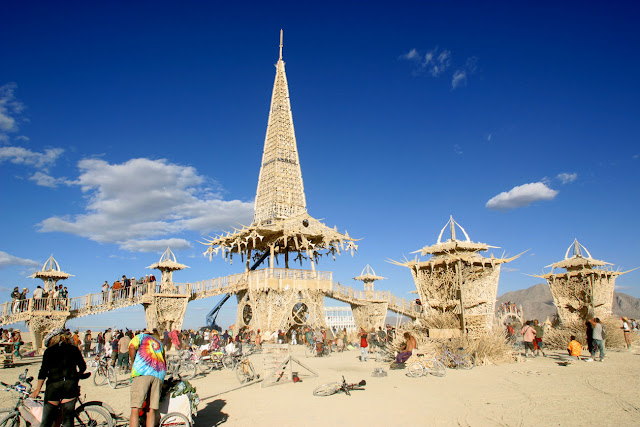 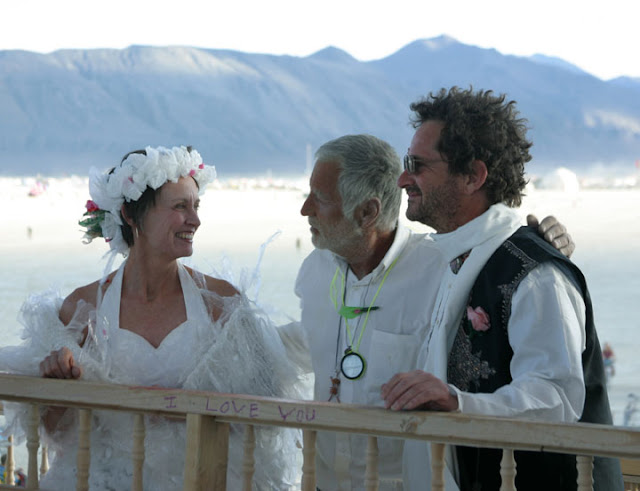 In the whoop-de-doo of Burning Man, Best's Temple functions as a somber memorial for the dearly departed. It is burned to ashes the last night of the event. Best wanders slowly around the gathered circle of 1000's and quietly says, over and over, "It's not your fault" while on this night, the thump of dance music blaring from giant speakers is replaced by the voice of Diva Marisa Lenhardt echoing across the otherwise silent desert. Anyone dry-eyed? Not a chance…give a listen to Marisa singing here at the Ghost Ship Elegy at Grace Cathedral. Get out your hankies.

From 1999 to 2008 LadyBee helped to shape all things large and small of the Burning Man visual aesthetic. Today for the large — she continues as the archivist and manager for the Burning Man art collection. And for the small — she has the definitive collection of Burning Man jewelry and recently co-authored with Karen Christians and George Post The Jewelry of Burning Man. Selected pieces are included in "No Spectators: The Art of Burning Man"at the Smithsonian's Renwick Gallery, in Washington DC, March 30, 2018 - January 21, 2019.

Although Burning Man is best known for the transitory, the ephemeral, the jewelry Lady Bee has collected are enduring artifacts of the creative and generous spirit of the event. When she talks about the artists who gifted her the pieces for the collection, her face shines with admiration of their skill in crafting rare and beautiful work but it is their generosity that touches her heart. In this gift economy, trade is not expected in return. The gift is the gift.

The ethos of Burning Man has been codified into ten guiding principles that include gifting, radical inclusivity, radical self-reliance, participation, and de-commodification and leave no trace. The costume play and jewelry are a way that people can freely explore and express who they want to be.

It has been a bone-dry December, with below average precipitation for the season, so there was not much plastic on the beach. Even so, during our afternoon stroll, each of us brought back a bag full of trash and treasure.

Since any plastic on the beach, even one piece, is heartbreaking, Richard and I have developed fun categories that help turn the despair of our task into a game. We compete to find:
the hardest to see (the color of the sand, or entangled in seaweed),
the rarest (ballot box lid from the 2001 election)
the most (candy wrappers)
the distance (a water bottle from India)
our top ten (what we find most of the time)

Lady Bee's keen eye and curatorial skills made her a champion beach plastic collector. Not only did she find this toy car - almost exactly the color of the sand (the hardest to see) she also found the head of a soldier and a full figure of a solder (the rarest and the most - 2 in 1 day). 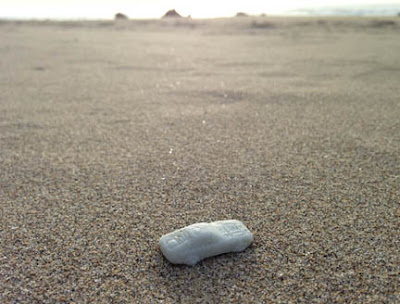 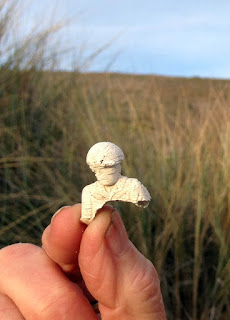 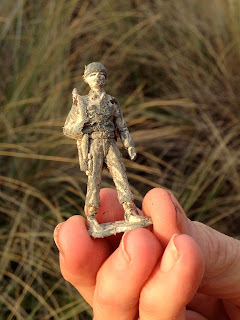 Just before dusk we headed back, skirting the edge of the Kehoe Creek inlet - a place that often harbors lots of plastic. We stopped to chat with an intense young man, poised with his camera focused on a pile driftwood. He said that by 3 AM he leaves his home in Oakland, arriving at the beach before dawn where he spends the entire day, until sunset then dark. In the last three years he has made that trip at least 75 times describing his wife as "a Point Reyes widow." The beach offers respite from intensity of his life as a writer. Coming out in February his latest novel In the Cemetery of the Orange Trees.


Often serendipity is at play at Kehoe so it was not exactly a surprise to run into Annie Hallett on the trail, in a hurry to get out to the beach before sunset. Annie, a long time Burner, artist extraordinaire, crafts masks and performance pieces who along with Pepe Orzan staged elaborate operas. Including the Omphalos Ritual of 2003.

Posted by Beach Plastic at 11:30 PM No comments:

After much anticipation and fanfare, on December 7, Richard celebrated his 70th birthday. He has been describing Pearl Harbor Day, a day that will live in infamy - both as a historical and personal, milestone— this year it his "sell by" date and he has made an addendum to Psalm 90:10 The days of our years are threescore years and ten; after that it's all gravy baby.

Time is passing and we are feelin' it so we are taking care of business! We are not ready to kick the bucket and we don't have a bucket list where we pine about what we have not yet accomplished but we do dream about a trip to Paris and visiting the sacred temples in Ankor Wat. For us, life in the studio is the bucket list.

Tops, on our closer to home to-do list, is to get our affairs in order which means:
1. selecting a durable power of attorney
2. writing a will
3. signing advance health care directives
4. establishing a trust

Today we met with our attorney to review the rough draft of the Selby-Lang Trust and make important decisions about how to divest our life savings and what to do with all of our stuff.

We smile as we spread our arms, gesturing towards the piles and boxes of plastic in the barn and generously say to Richard's kids, some day this will all be yours.
Ha! Ha! 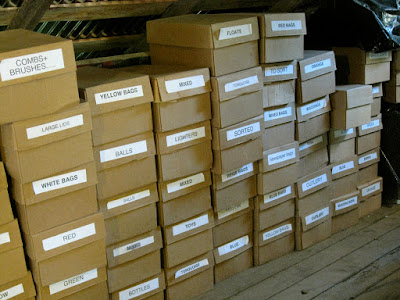 We are reminded of this joke and we laugh when we think about the value of our artwork after we are dead:

An artist is having show in a blue chip gallery.
She visits her exhibit...
The gallerist says,  "I have good news and I have bad news for you."
"Give me the good news, first."
"Well….. a guy walks in buys the whole show…."

"The guy was your doctor."

After our meeting in Inverness, in what seemed to be a naughty transgression, playing hooky, we decided instead of going to Kehoe Beach we would go to Limantour. As soon as we turned on to Limantour Road we felt we were on vacation. It had been years since we had been out that way together, lashed as we are to our "job" at Kehoe. The Vision Fire of 1995 had devastated acres of the park but now snags of charred bishop pines are being usurped by new growth with the seeds and spores that were activated by the fire. We don't often get to see the slow forces of nature do their work, but in the aftermath it's very clear as well as heartening how the forest is self regenerative. We sighed in relief and sighed too because —Ha! Ha! Kehoe Beach, no picking up plastic today — we are on our way to a vacation at Limantour. 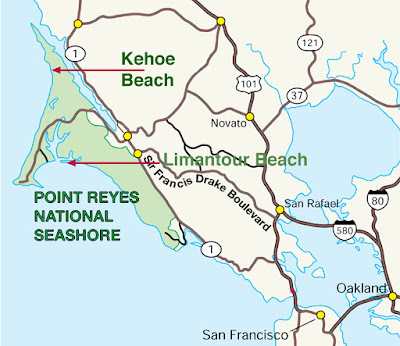 At the trailhead, we were pleased to see a pick-up station that was well stocked with reusable bags set by our friends from All One Ocean. 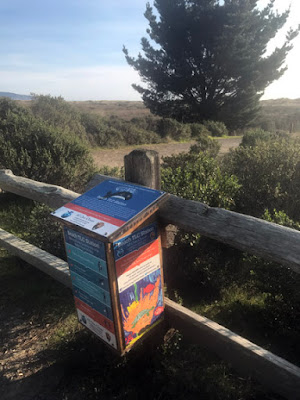 This crystal clear day in December, was unseasonably balmy, without an ounce of breeze. By mid-afternoon the sun was already low in the sky, putting the scurry of footprints into high relief. 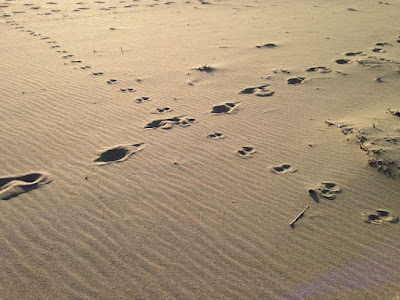 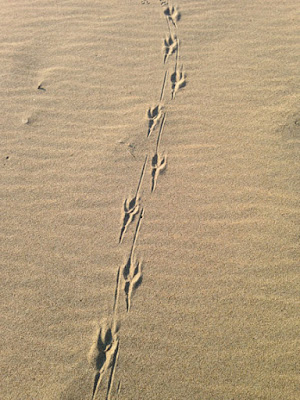 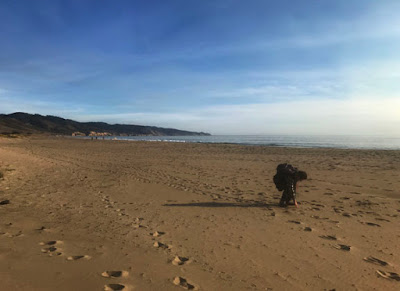 So much for Ha! Ha! Kehoe Beach - wherever we are, the impulse to pick up, is undeniable. But there was not much plastic so Richard turned his attention inward to some serious musings about Supporting the Rational Park Service (how about a bumper sticker?) and the value of unencumbered space. These days when the federal government is trying to downsize our public holdings we stress the value of stress-free meanders. How does that value size up to the extracting of natural resources? Congress passed in 1916 the NPS Organic Act establishing the mission of the National Park Service. 1916!! Sounds rational to us. Back then "Organic" was not yet a marketing ploy of corporate virtuosity.

What actually makes America Great? It's the natural resources we've inherited, dummy. When applying for CO status during the Vietnam debacle, Richard was asked, "What would you be willing to fight and die for?" Back then he said, "It would be be the preservation of the natural world" which includes the artists who seem to be the last of the "wild humans" on the planet. Or as a friend once said—"One should, above all, protect artists, poets and wild animals from harm." 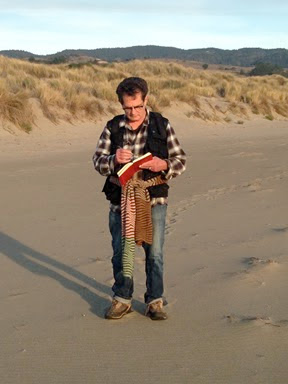 Judith meandered on, skirting the high edge of grasses that catch slips of nigh invisible plastic wrappers and styrofoam. 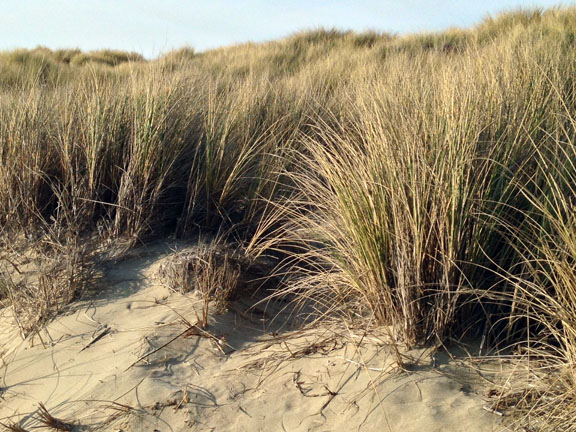 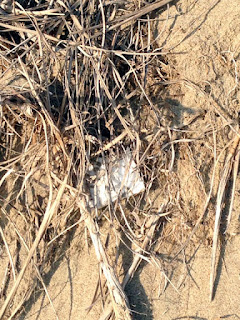 On Feb. 22, 2010 Congress approved a law allowing loaded firearms in national parks. That means people can openly carry legal handguns, rifles, shotguns and other firearms and also may carry concealed guns as allowed by state statute. Rational, right? Not to worry, Judith found a hand-gun albeit a hand holding a gun. That little piece of insignificance is just 5/8th of an inch long, how did she ever see it? 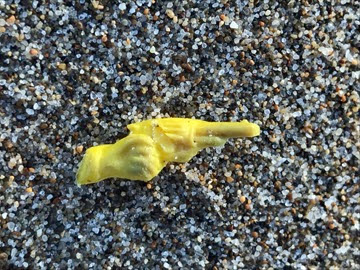 Thanks to vigilant citizens and the NPS who stay true to the mission: we spread our arms, gesturing towards the beach and the ocean and assure Richard's kids and kids everywhere that

Someday …this will all be yours... 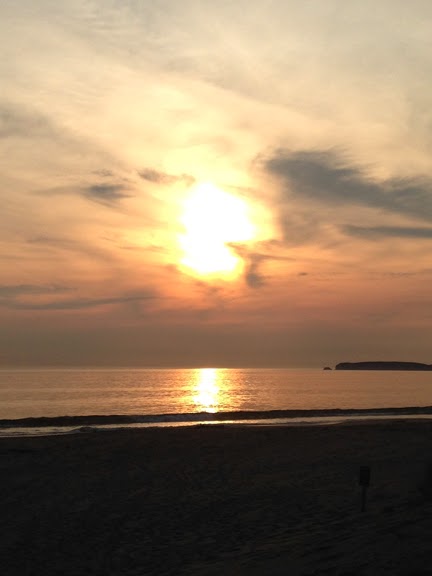 Posted by Beach Plastic at 3:16 PM No comments: 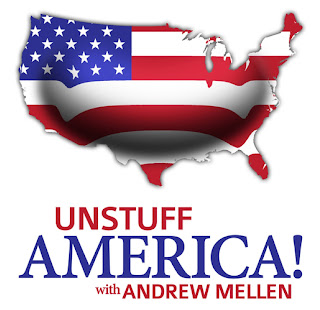 how to see the world as an artist while making

7 days ago 38:08
➕ Subscribe
Playing
M4A•Episode home•Series home•Public Feed
By Andrew Mellen, Chief Expert Organizer. Discovered by Player FM and our community — copyright is owned by the publisher, not Player FM, and audio streamed directly from their servers.
Since 1999, Richard Lang and Judith Selby Lang as a collaborative team have been visiting Kehoe Beach, Point Reyes National Seashore in Northern California. They
have rambled 1000 meters of tideline of this one beach hundreds of times to gather plastic debris washing out of the Pacific Ocean and from this one beach have collected over two tons of material. They share their individual and collaborative journeys as a practical guide and as a metaphor of how microphilanthropy and small acts of kindness and curiosity can shape a life of meaning, fun and deep connection. Learn more about “the most organized man in America” at andrewmellen.com.

Posted by Beach Plastic at 6:40 AM