After months of planning and hundreds of emails we FINALLY arrived in Hong Kong and were warmly welcomed by Doug Woodring, co-founder of the Ocean Recovery Alliance and organizer of the Hong Kong Ocean Film Festival and the Ocean Art Walk in Stanley Bay, HK. Thanks to Doug we spent an amazing 7 days in Hong Kong where we created and installed a group of artworks that will be on display at Stanley Bay, April 9-23. 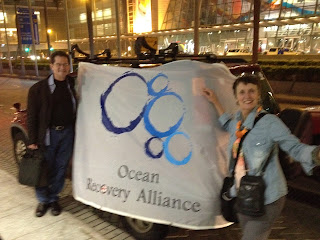 To really know a country the hardware store is THE place. It's where you can find out how people get things done. And in the case of Hong Kong, where there is no Home Depot- it can mean going way off-the-beaten path.  To really know a person you have to have gone the distance with them down narrow alley ways to hardware stores to find the right supplies to get the job done. Doug showed us the way so we are now writing the Lonely Planet Guide to Hardware Stores, HK. 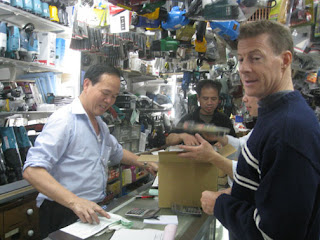 Thanks to an awesome HK Ocean Art Walk team of volunteers who exemplified the famous proverb, Many Hands make light work, we were able to make quick work of over 2500 single-use bottles to create Water Lilies. We couldn't have done it without them. 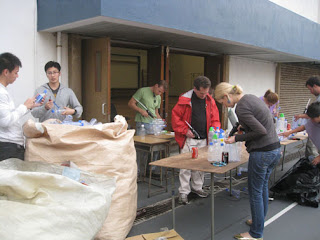 Richard Hill captured in time lapse the days of construction and installation. He compressed hours of work into a few short minutes. He made it look so easy. 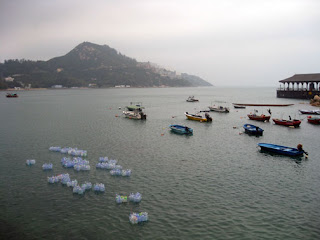 On the walkway out to Blake's Pier we mounted Plastic Buffet, creating a corridor gallery to showcase our series of prints. Rather than paint or pencil we use shards of plastic as our medium. They become akin to strokes of paint on a palette. 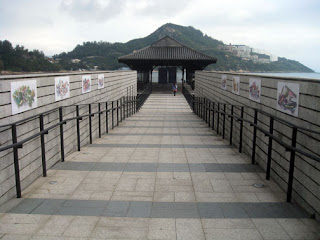 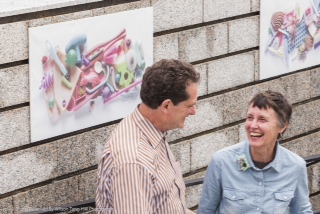 From the massive girders of  Blake's Pier we hung banners. On one side high-resolution images of plastic were super-imposed on a photograph taken in the middle of the Pacific Ocean, in the North Pacific Gyre to symbolize the human impact we are having in even the most remote locations on earth. On the other side we presented our series Full Fathom Five inspired by Jackson Pollock's gigantic drip paintings. We tried to emulate his style using the fibers of fishing net and line. His "all over" composition lends itself to these pieces. Netting is indeed all over the planet's oceans. 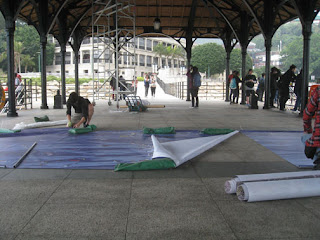 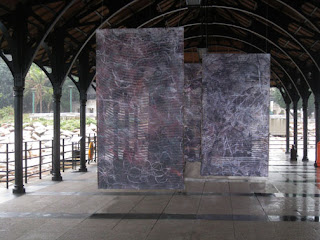 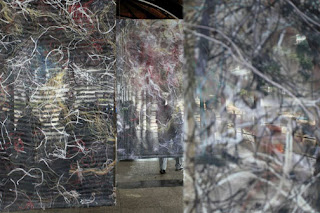 Net Man composed of old fishing nets collected from the fishermen in Aberdeen represents a character from the ocean, who comes out of the water to show his pleasure about the revival of the biodiversity of Hong Kong waters as a result of new controls on overfishing.  As a testimony to the resilience of the ocean, Net Man celebrates the healing forces of nature.

Net Man applauds efforts to bring awareness to the problems of intensive and unmonitored fishing, pollution, trawling, dredging and dumping that have had a negative impact on our marine environment.  He expresses the vision of healthier seas, safeguarding our marine ecology for future generations, by giving the ocean the breathing space needs to come back to life. 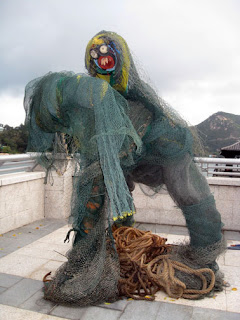 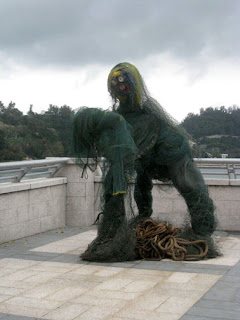 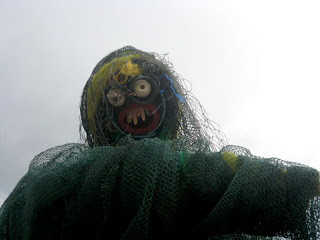 We are thrilled to be a part of such a grand endeavor to engage and educate visitors and passersby about the importance of the health of the oceans. We are thrilled to join forces with the other fine artists who contributed to the Ocean Art Walk. The press conference was a huge success with the artists and lots of reporters mixing it up.  South China Morning News posted a report. 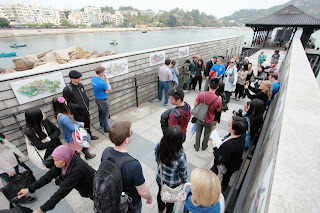 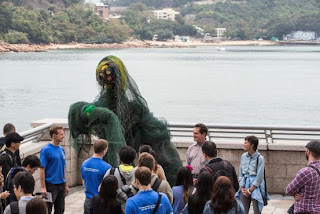 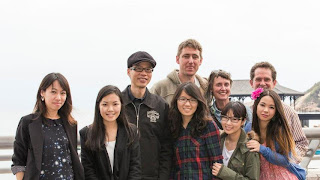 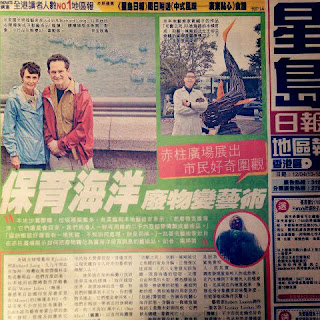 Although it seemed like we did nothing but work, Doug took good care of us, making sure that we enjoyed delicious fare from the sidewalk vendor and the famous Hong Kong hotpot. 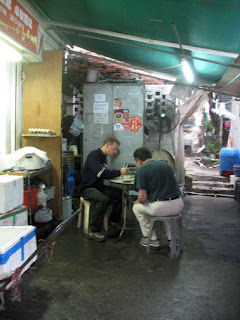 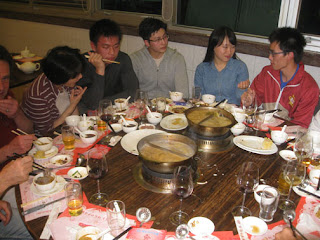 And we even had one morning to do a walking tour exploring the shops close by our hotel. 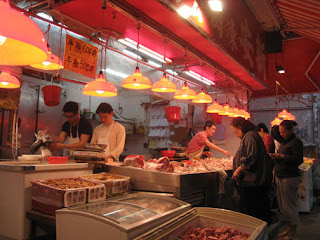 Special thanks to the photographers who contributed to this blog post: Richard Hill, Wilson Tang, Kacie Wong, and Doug Woodring.

Posted by Beach Plastic at 6:47 PM No comments: