We grew up with the myth of the solitary artist, starving in a garret, wresting a vision from the depths of the soul. A lonely existence — why would anyone aspire to such suffering? But, as the myth goes, the rewards are great — that devotion to suffering for the creative life would be inscribed in the annals of art history, or at least a mention in the back pages of Artforum magazine.

So you might imagine that we when we met, the idea of collaborating met with a bit of resistance. Could the sum of the parts really be greater than our individual efforts? Could we really join forces with someone we love to make art?

The research proves true that humans have a long history of working together, whether tiling the soil or building a monumental cathedral, many hands make light work. As a noun it is called team-work; as a verb, coupling; or maybe yoking up to pull a heavier wagon. There is a quite a list of couples who have changed art history: the Delauneys, the Eames, Gilbert and George, Christo and Jeanne-Claude.

In 1999 we forged an artist partnership to work with plastic found on Kehoe Beach. Since then, as our collection of plastic has grown, we have grown as individuals and as collaborators. Now with the Venn Diagram of our lives set we understand the challenges and pleasures of working with each other and we have have worked successfully with curators and directors who have helped to enlarge our project, adding other circles to our set. We appreciate the lively conversations that ensue when problem solving big issues about installations and exhibitions. As we like to say, we play well with others.

Thanks to director Farley Gwazda at the Worth Ryder Gallery at UC Berkeley we prepared the table for participation for the exhibit theme (processing). Farley was interested in engaging students in our sorting methods so we were able to experiment with the idea of adding circles to our Venn Diagram by including others in our collaboration. Visitors would complete the table setting by sorting and arranging pieces of plastic on the plates we provided.

Check these fun fab pics of the (processing) opening reception with in-action shots of people gathered around our table of plastic, creating plates full of amazing arrangements. 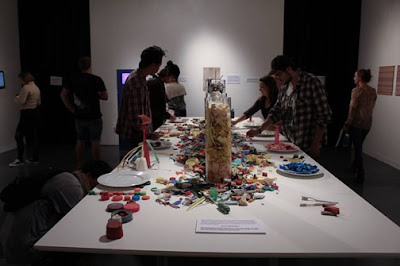 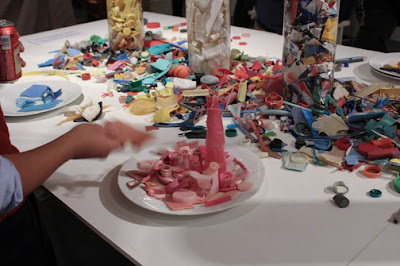 In the corridor adjacent to the gallery, our posters asked passersby for help identifying plastic objects from our collection. Inspired by the have you seen me? question posed on milk cartons, our posters evoked written responses — both serious and sublime. 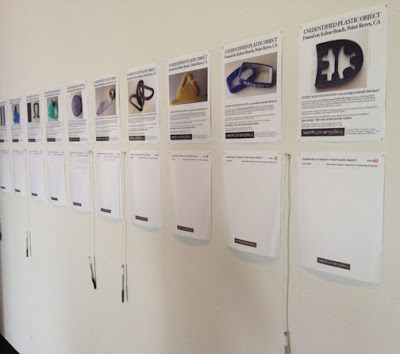 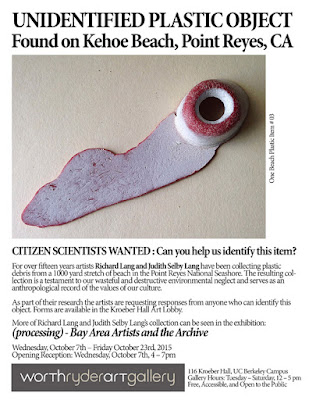 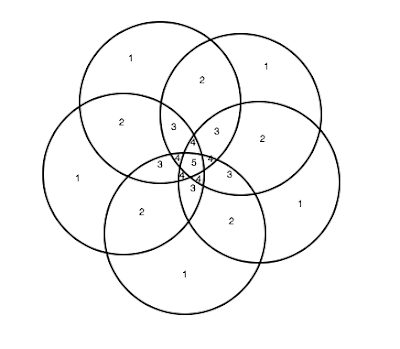 Posted by Beach Plastic at 7:51 AM No comments:

A rose is a rose

It was a dream of a dream to wake in the middle of the night to hear the sound of rain. Unfamiliar, unexpected, unpredicted, rain. My dream sighed relief.

After almost three years of drought we Californians are feeling parched so that any, any amount of moisture from the sky is a blessing.

A hike with Rebecca Didomenico is like that — a dream of the magic of the unexpected and although I know well the hike from Abbott's Lagoon to Kehoe Beach, our far-ranging conversation had me traveling in unexpected territory. 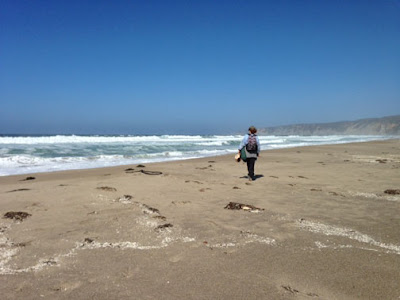 Her expansive creativity — she is always on the case, generating new ideas and visions, along with her love of the banter of problem solving make her an ideal walking/talking companion. Fueled by her description of globes of umbrellas, magic carpets suspended in space and a 100 foot mica and ribbon bridge along with my own flights of fantasy, we trekked the beach at a lively pace. And, did I say, she is a star!!! 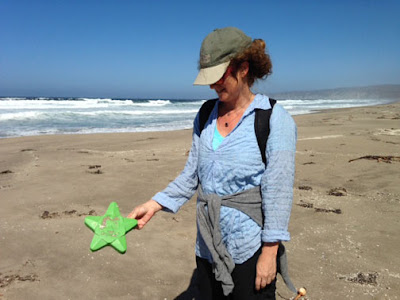 She described her upcoming trip to Paris for the United Nations Conference on Climate Change and her idea about having her most recent installation Emanate on display during this crucial time when world leaders will be convening to discuss the climatological roadmap to the future. In a magnificent obsession Rebecca has razor cut away the land from hundreds of paper road maps leaving the intricate web of highways and byways. A stunning visual of what has been paved and what remains of ground. Has me thinking of the impact fossil fuel transport and the apt line from Joni Mitchell's song, Big Yellow Taxi: they paved paradise and put up a parking lot. 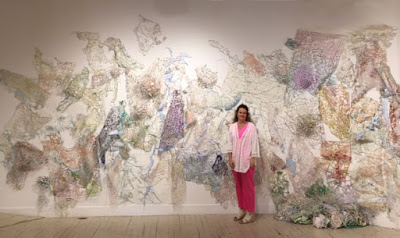 We talked about places she might, in a gesture of impromptu transgression, just hang them up, if even only long enough to snap a pic — the Tuileries Garden, the pyramid courtyard at the Louvre, or the Père Lachaise Cemetery. 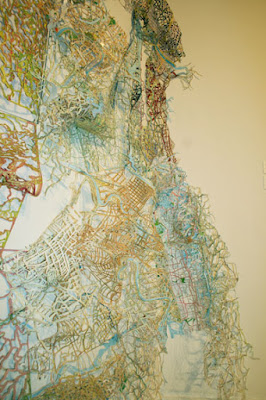 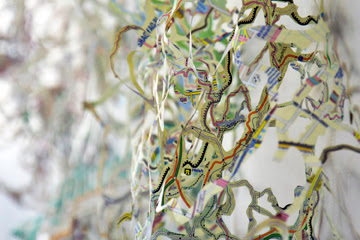 I was reminded of my own impromptu enactment of a transgression at
The Garden of the Imagination, Les Jardins de l’Imaginaire, in Terrasson in the valley of Vézère in 2002. 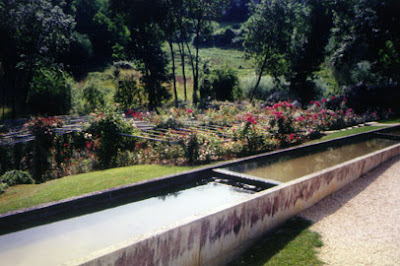 In 2001/2002 Richard and I served as painting instructors for travel excursions to the Dordogne Region of France. In 2001, while visiting the garden with our troop of students, I was enthralled with the abundance of glorious blooms of rare and exotic varieties in the rose garden and the trough, a water channel that originated in the rosary that stepped down the long hillside to an expansive view overlooking the Vézère Valley and the village of Terrasson-Lavilledieu below, designed by landscape architect Kathryn Gustafson.

Captivated by the journey of the water and with the stages of the initiation that the course expressed, I felt moved to make an art piece that would commune with that place in time. I imagined creating a lovely temporal transgression — a bouquet of roses to float downstream.

With this thought in mind I took many close-up photographs of the roses. Back at home in my studio, I enlarged the photographs then affixed them to foam core. A thin layer of transparent casting resin made the images floatable and impervious to water.

In 2002, my lightweight "blossoms" were secreted away in my luggage so it was a great surprise to my traveling companions when I enacted my floating roses.

As I gently placed each blossom on the surface of the water and they began to slowly meander downstream, we all gasped in amazement. It was an uncanny vision made even more improbable that this was only for this passing moment. After the thirty roses completed their journey to the bottom of the hill I gathered them up and put them back in my handbag. 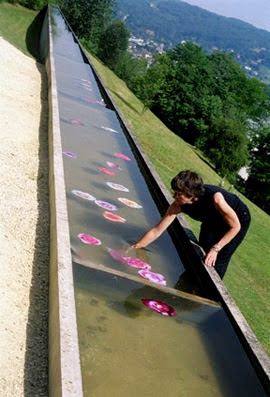 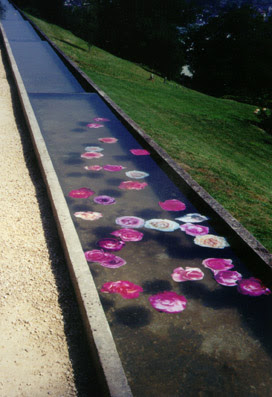 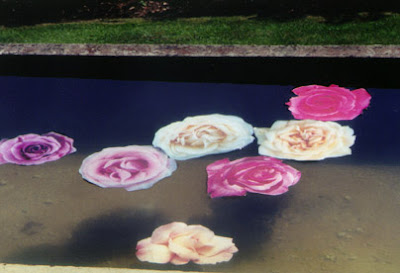 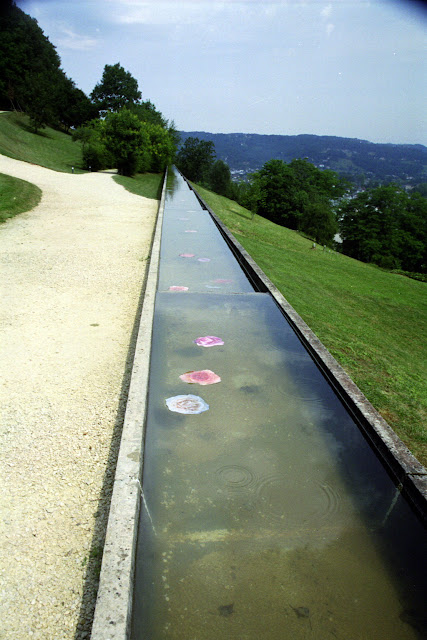 Posted by Beach Plastic at 6:43 AM No comments: