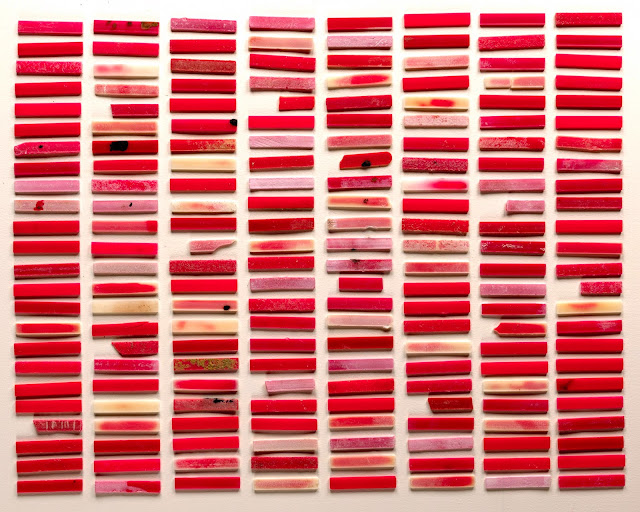 Dear Kraft Foods,
Yesterday on a little half mile of beach we found 18 of your little cheese spreaders from your Kraft Handi-Snak cheese packs. The week before we found 21. And 13 before that. Given the sea-patina and bleaching it’s obvious they have been at sea and not left by pick-nickers. Congratulations! you are having a great year given the empirical evidence we’ve found. Isn’t it time you followed the golden rule now that you have been given the free speech rights of a person granted by the constitution.
Peace and love,
Richard and Judith

“The US Supreme Court has struck down a major portion of a 2002 campaign-finance reform law, saying it violates the free-speech right of corporations to engage in public debate of political issues.” Christian Science Monitor

In the late 1880’s corporations were granted “person-hood” essentially giving them as written in the declaration of Independence…”We hold these truths to be self-evident, that all men are created equal, that they are endowed by their Creator with certain unalienable Rights, that among these are Life, Liberty and the pursuit of Happiness.” Although the progressive movement has railed against this idea of corporate “person-hood” by 2010 this genie is well free of the bottle. It’s a fool’s errand to fight against a wave that has long ago crashed ashore.
What to do?
While I am not a “believer” or a keeper of religious ritual, as an artist I feel myself to be a part of the 30,000-year continuum of humans engaged with the imaginal life. I feel engaged with the essence of human spirituality. Yet, in an age when religious fundamentalism is causing such havoc, it is treading on very thin ice to evoke any kind of religiosity. But, that said….
During the time of Jesus, Rabbi Hillel, when challenged by a gentile, who posed a question, as a taunt, saying, “I will convert, Rabbi, if you can explain your thinking while standing on one leg.” “Easy”, says Hillel, “Do to others as you would have others do to you. All our texts are commentary on that idea, now go and study them.” This simple moral code is the core teaching of all major religions on this planet.
There is no fighting the corporate nature of our global society, but we can insist that if corporations are to enjoy the rights of person-hood, it is time for them to adopt the one true moral compass of existence, “Do to others, what you have them do to you.”
~ Richard Lang

On every visit to Kehoe Beach we have found washed up on the sand these single use plastic spreaders from Kraft Handi-Snak cheese packs. These rectangular pieces of red plastic last hundreds of years in the environment.
Gorgeous Kehoe Beach is located 40 miles north of San Francisco in Point Reyes National Seashore . See Kehoe Beach on BlooSee satellite imagery here.

You can contact Kraft Foods customer service by phone at 1-877-535-5666, or in writing by clicking the happy snack logo. Tell them how happy you are.
Posted by Beach Plastic at 11:16 AM 3 comments: